The Durham probe ”is definitely still happening,’ a source told Fox News, after it appears to have gone dormant for the weeks surrounding the elections.

The statements vouching for the continuance of the probe come after Durham, who was tapped by Attorney General Bill Barr for the effort, brought charges against just one individual, FBI lawyer Kevin Clinesmith. The possibility that it would not bring further charges in the lead-up to the elections infuriated President Donald Trump, who vented about it in an October two-hour call-in interview with conservative host Rush Limbaugh.

Trump raged in October when Limbaugh told him that Barr told Congress not to expect charges in the final weeks before Election Day. Existing DOJ policy prohibits actions that might interfere in an election.

‘If that’s the case I think it’s terrible. It’s very disappointing. And I’ll tell him to his face,’ Trump said during a call-in interview with conservative host Rush Limbaugh. ‘I think it’s a disgrace. It’s an embarrassment,’ Trump said. 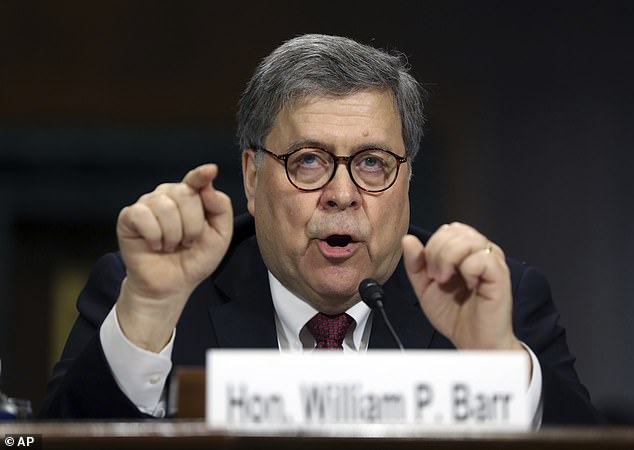 Kevin Clinesmith, a Washington D.C.-area attorney, was publicly accused by a Congressman of possibly being the FBI lawyer described in the Inspector General’s report as allegedly writing anti-Trump messages, including one that declared ‘viva le resistance’

Trump has complained for years that people ‘spied’ on his campaign and demanded action. In final campaign rallies, he even called for former President Barack Obama and former Vice President Joe Biden to be jailed.

Since the election, he has shifted his focus to unsubstantiated charges of massive voter fraud. Trump declared Wednesday that he ‘won’ his election against President-elect Joe Biden, despite media networks calling the race for Biden.

He has taken a series of personnel actions since Nov. 3, including firing Pengagon boss Mark Esper and pushing out a top cybersecurity official at the Homeland Security Department who debunked fraud claims on a government web site.

Clinesmith was charged with altering an email relating to surveillance of former Trump campaign foreign policy advisor Carter Page. But Durham’s probe took no action since.

A source told the network Durham ‘does not want this to be viewed political,” predicted he would “punt it to after the election.’

Democrats have continued to howl at actions by Barr that have yielded political benefits for Trump, accusing him of acting like the president’s personal lawyer, with some even threatening his impeachment.

Nora Dannehy, the top prosecutor on the probe, quit her post in September. The Hartford Courant reported it was over concerns there was pressure to produce a report before the probe’s work was completed.

According to the paper, ‘colleagues said Dannehy is not a supporter of President Donald J. Trump and has been concerned in recent weeks by what she believed was pressure from Barr — who appointed Durham — to produce results before the election.’

The move came days after Barr said there ‘could be’ more charges coming in the probe.

Tags: Durham, into, investigation, orig
You may also like
Celebrities News