Crowds have once again returned, under clear and starry skies, to Melbourne’s Shine of Remembrance to reflect and remember at the Anzac Day dawn service.

After a year in which Victorians were unable to commemorate Anzac Day together, veterans, serving members, their families and the public – for many of whom the dawn service is an annual tradition – were grateful to return on Sunday morning.

Before the service began, people huddled in silence in small groups in the darkness around the Eternal Flame. 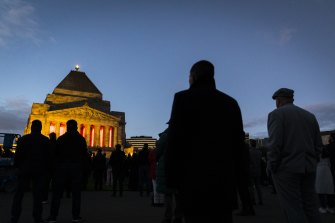 Citizens are seen amongst Veterans paying their respects at the ANZAC Day Dawn Service, Shrine of Remembrance. Credit:Chris Hopkins

One of those was Roslyn Devlin, who came in from Carlton proudly wearing her father’s WWII medals to the service. He served in the Air Force in Italy.

“We try [to come every year]. We’ve been to one in Budapest where his remains are,” she said. “Last year I was in my driveway with my torch.”

“It’s been good to be able to get the tickets, my son got them for me.”

Malcolm Clark, 70, wearing his father and father-in-law’s service medals, stepped up to flame and threw coins as he recited the names of his relatives who had served. 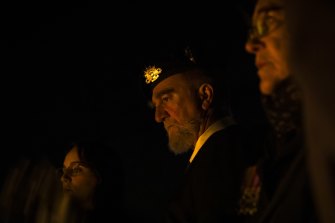 The Kew father comes every year and was glad to be back. But he also said he had been heartened last year to see neighbours gathering in their driveways to mark the day. Many were doing the same this year.

“I think it’s brilliant,” he said. “I think there will be a more diverse recognition [of Anzac Day]’.”

While those who had been able to get a ticket were grateful to have snagged a spot, there was disquiet on the edges of the Shrine, where large temporary fencing was erected around the site.

A total of 1400 members of the public were allowed to attend the dawn service this year and had to pre-register and get tickets online. In 2019, 25,000 people attended.

Despite the crowd limits, dozens gathered to watch the proceedings through the wire fence, with many frustrated that they were not able to get inside.

John Murphy, from Bundoora, stood at the fenceline with his walker on the top of a steep, grassy hill. He said he was disappointed that the site had been fenced off and said he didn’t believe the event should be ticketed. 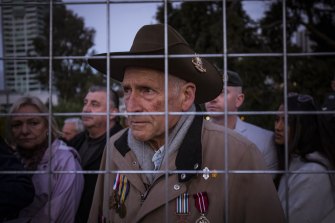 Hundreds of people, including John Murphy, wishing to pay their respects were locked out of the Shrine and the ANZAC Day Dawn Service, Shrine of Remembrance.Credit:Chris Hopkins

“I was never going to have a ticket to come to this event. I’d sooner be on the outside without a ticket looking in, than the idiots who submitted to a ticket. So I’m here. I’ve been coming for nearly 30 years,” he said.

“It’s good to be back… I didn’t attempt to come last year. I had my dawn service at the front gate.”

Another man standing near Mr Murphy said a “dumb government fence” wasn’t going to stop him from coming to the Shrine to attend the service.

Further down, Jay, who served with the Australian Defence Force for ten years full-time and ten years part-time and completed tours in East Timor and Iraq, said he tried to get tickets about ten days ago but wasn’t able to. 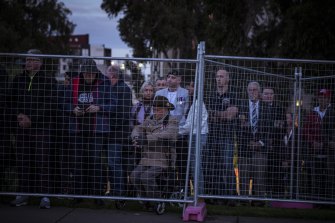 Hundreds of people, including John Murphy, wishing to pay their respects were locked out of the Shrine and the ANZAC Day Dawn Service, Shrine of Remembrance.Credit:Chris Hopkins

“We would normally come and gather around the obelisk each year,” he said. “Given it’s an outdoor event, I don’t know how they can fit 85,000 in the MCG and it be ok and only 1,400 here, it’s quite ridiculous.”

His friend Alex, who also served in Iraq and East Timor, was able to get a ticket and they pair stood together, separated by a fence. 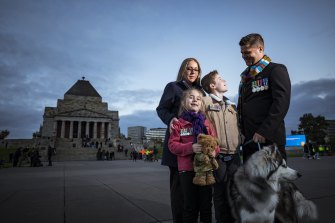 Kyal and Andrea Rode with Lily (10) and Michael (7) at the ANZAC Day Dawn Service, Shrine of Remembrance. Credit:Chris Hopkins

“We were just lucky my wife booked the tickets so we were able to come in,” said Mr Rode.

Ms Rode said they wanted their children to come to each year with them to learn what Anzac Day meant.

“It’s to teach them the respect and carry out traditions. Passing down to the generation. And it’s also about learning, so they know what it’s all about. We’ve done many dawn services but getting them up nice and early. It’s a lot for them and to stand here and be nice and quiet and wonder why we are quiet,” he said.

“That’s what we hope, to pass down the history. So one day they are standing here at this age. And plus they are here to remember family members who were in WWII. Grandparents, parents, uncles.”

The president of RSL Victoria told The Age on Friday that many veterans and members of the public were choosing to commemorate Anzac Day in smaller, local ceremonies this year, due in part to confusion around arrangements for events in the CBD and the risks associated with the pandemic.

A capacity cap on the number of people who could march was increased from 5500 to 8000 this week following a backlash and confusion about changing arrangements for the event, which was initially cancelled in February. Some veterans have said they would boycott this weekend’s marquee AFL matches at the MCG, where crowds of 85,000 people are allowed.

Those who have not registered but still want to march were allowed to register via a QR code system on the day.

There will be ceremonial proceedings including bugle calls, speeches and wreath-laying from 6am, before people will be invited to lay a poppy at the Stone of Remembrance.

The Anzac Day march down St Kilda Road to the Shrine of Remembrance will run from 9.30am to 11.15am.

Representatives from the Royal Australian Air Force will be in the leading contingent of the march, just behind the official party, in recognition of the 100th anniversary of the formation of the RAAF. Current serving members of the defence force, veterans, allies and descendants participating in the march will walk in groups allocated by their era of service.

At the conclusion of the march, a commemoration service will take place which will include an official wreath-laying and a recitation of the Ode of Remembrance and the Anzac Requiem.

Dr Webster said on Friday there were a number of reasons for the low attendance rates, including reluctance by those over 70 who were in a vulnerable age group and hadn’t had a COVID-19 vaccination.

“We have also encouraged people to stay local wherever they can,” he said.

“We know we have got nearly 200 sub-branches across the state running Anzac Day events and we know because of some of the confusion around the march that many of the unit associations who might typically come into the march and then go to Footscray or Hawthorn for their reunions decided to march close to where their reunions are.”