The daughter of Dubai’s ruler sent secret videos to friends accusing her father of holding her hostage.

Princess Latifa, 35, said she feared for her life and didn’t know if she would survive in footage obtained by BBC Panorama from the bathroom of a villa jail ‘with barred windows and police guards’.

The young woman fled Dubai in February 2018 but was allegedly drugged and forcibly returned by boat weeks later.

The secret video messages mark the first time she has been heard from in years. They were filmed over a number of months on a phone she was secretly given roughly a year after her alleged capture.

Her friends say the messages have now stopped and are calling on the United Nations to step in.

Her father Sheikh Mohammed bin Rashid Al Maktoum and the Dubai Royal Court have claimed she is safe in the loving care of her family.

In one video, she says: ‘I’m doing this video from a bathroom because this is the only room with a door I can lock. I can’t lock the door to my room, there’s no key.

‘I’m a hostage and this villa has been converted into a jail. All the windows are barred shut, I can’t open any window.

‘There’s five policemen outside and two policewomen inside the house. And I can’t even go outside to get any fresh air.’

The princess said she didn’t know when she would be released – and on what conditions. 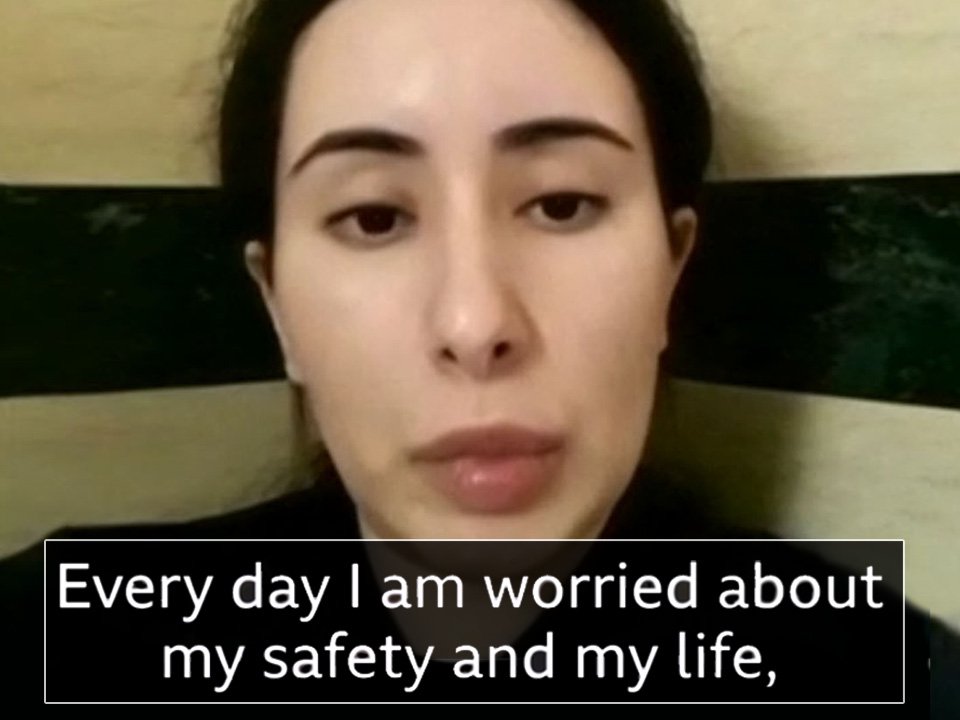 She added: ‘Every day I’m worried about my safety and my life. Don’t know if I’m going to survive the situation.

‘The police threaten that I’ll be in prison my whole life and I’ll never see the sun again.’

Princess Latifa also described her kidnapping in the videos, saying she ‘kicked and screamed’ as the soldiers escorted her from the boat.

She claims she was tranquillised and blacked out as she was carried onto a private jet which took her back to Dubai.

Panorama claims to have independently verified the details of where she was being held.

After much deliberation, they decided to release the video out of concern for the princess’ safety.

Last year the High Court in London found Sheikh Mohammed bin Rashid Al Maktoum ‘ordered and orchestrated’ the abduction and forced return to Dubai of Princess Latifa twice, in 2002 and again in 2018.

The ruler, one of the richest heads of state in the world, has previously been pictured alongside the Queen at horse racing events due to their shared passion for the sport.

The Queen was said to ‘distance herself’ from him following the High Court ruling.

BBC Panorama: The Missing Princess airs on BBC One, at 8.30pm tonight and then on BBC iPlayer.