Dozens of migrants land on beach in Kent escorted by the RNLI days after 1,568 crossed the Channel as ruthless people smugglers take advantage of calmer seas before winter

Dozens of migrants have landed in Kent today after crossing the Channel in dinghies and were immediately detained by officers.

Three dinghies made their way to British shores, two of which were escorted by the RNLI and border patrol to Dungeness and the third was returned to Dover.

Upon their arrival, the group of around 60 migrants were immediately detained by police stationed on the beach. 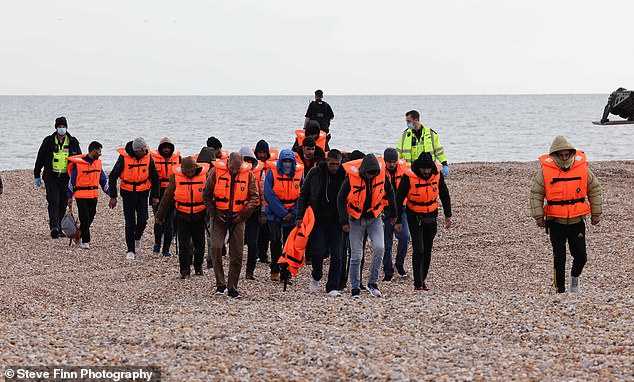 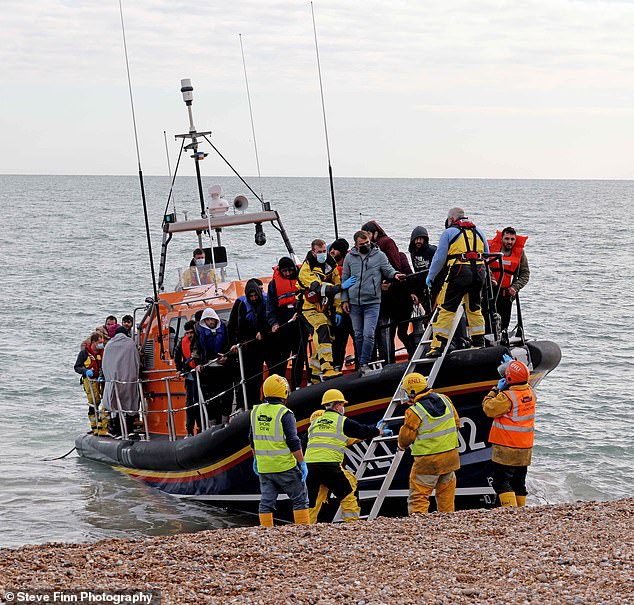 Three dinghies made their way to British shores, two of which were escorted by the RNLI to Dungeness and the third was returned to Dover 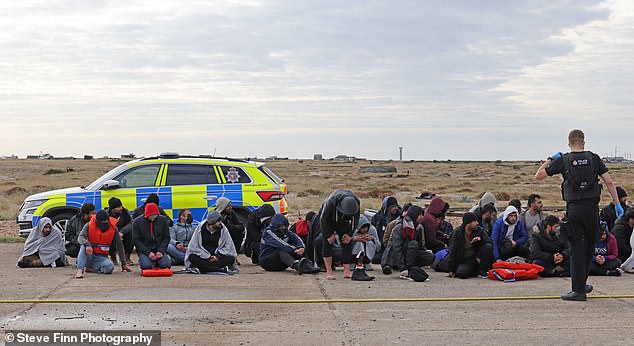 Upon their arrival, the group of around 60 migrants were immediately detained by police stationed on the beach

Earlier this week, it was revealed that Border Force officers detained 1,568 migrants crossing the English Channel in small boats in just four days.

People smugglers are taking advantage of calm seas before the weather closes in to make dozens of crossings.

In September there were a record 4,646 detained.

Priti Patel wants to grant Border Force officers immunity from prosecution if migrants die during her new operation to ‘turn back’ small boats crossing the Channel.

The Home Secretary has previously approved the plan which would see migrants boats intercepted and turned back to France by officers on jet skis.

Currently, sailors are obliged to rescue ‘a person in distress at sea’ under international maritime laws and failure to do so could result in up to two years in prison. 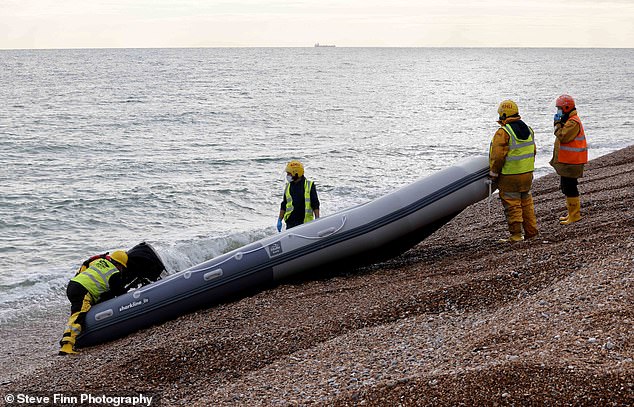 Earlier this week, it was revealed that Border Force officers detained 1,568 migrants crossing the English Channel in small boats in just four days 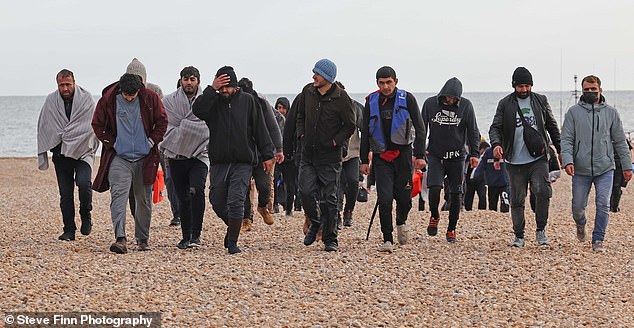 But the government is trying to pass the Nationality and and Borders Bill through Parliament, which would give Border Force officials immunity from prosecution during the ‘turnback’ operations.

The plans have been criticised by opposition MPs, and charities, while France has branded the tactics ‘illegal’.

Border Force currently has existing powers to intercept migrant boats attempting to cross the Channel once they reach UK waters. 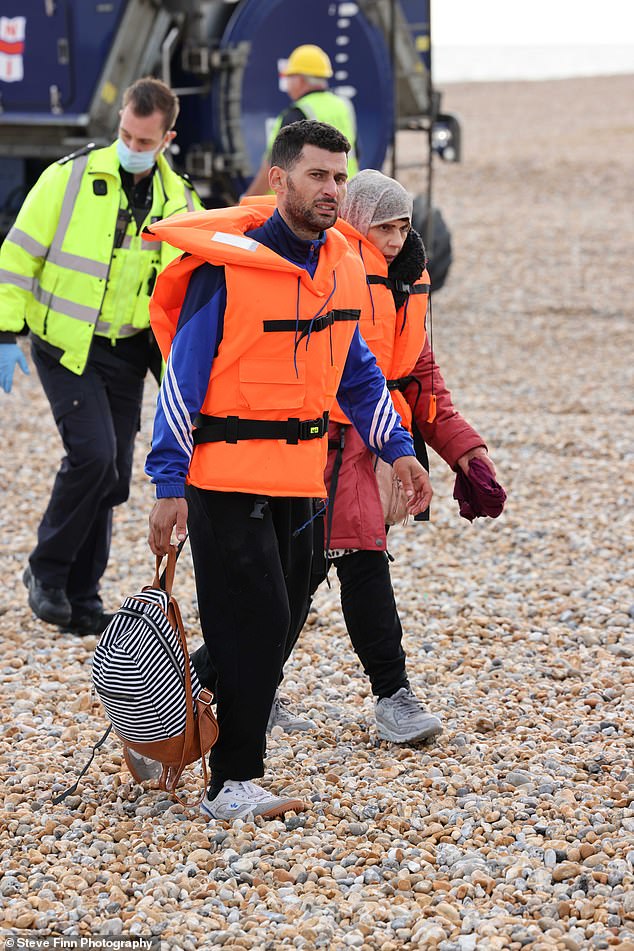 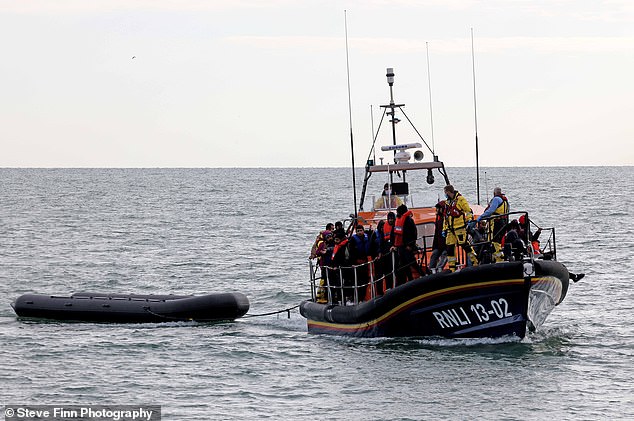 A Home Office spokesperson told MailOnline: ‘As part of our ongoing response to these dangerous crossings, we continue to evaluate and test a range of safe and legal options for stopping small boats.

‘All operational procedures used at sea comply and are delivered in accordance with domestic and international law.

‘We will fix the broken asylum system through our New Plan for Immigration, break the business model of people smugglers who put lives at risk and welcome people through safe and legal route.’

Miss Patel had been under pressure to clamp-down on illegal Channel crossings from France after the number of migrants detained by Border Force hit record highs this year. 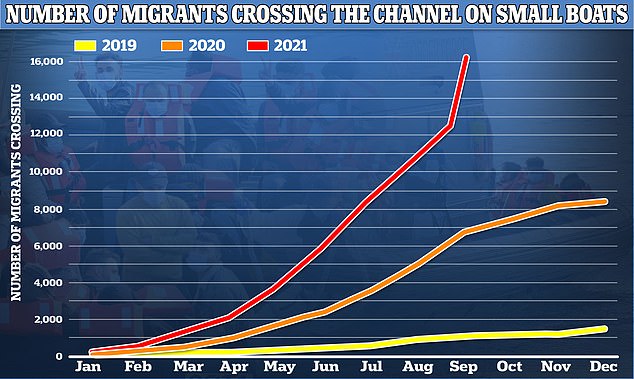 Data compiled by PA Media reveals that more than 17,000 people have crossed the Channel in 2021 so far

The Albanian government has denied that it is in talks with Britain to detain illegal migrants crossing the Channel in small boats while UK authorities handle their asylum requests.

The Albanian Prime Minister’s Official Spokesman branded reports in the Sun that London and Tirana are in talks to establish a new processing centre in the Balkan nation ‘absolutely untrue’.

The newspaper had quoted an unnamed insider in the talks saying that Home Secretary Priti Patel ‘has made it clear she wants this to happen’ and ‘we are down to the fine details’.

But spokesman Endri Fuga rubbished suggestions that Albania would host migrants on behalf of any third country and urged ‘richer and bigger countries’ to take in their share of migrants.

Albania’s denial is likely to raise questions about who briefed the Sun on the supposed plans. Miss Patel had been under pressure to clamp-down on illegal Channel crossings from France after the number of migrants detained by Border Force hit record highs this year.

A Government spokesman told MailOnline: ‘We are determined to tackle the unacceptable rise in dangerous Channel crossings.

‘The New Plan for Immigration is the only long term solution to fix the broken system, and includes changes to the law to tackle criminal gangs and prevent further loss of life. This is a shared, international challenge and we continue to work with other countries to meet it.’

Channel Rescue, a charity which observes migrants arriving in small boats across the Channel, warned Miss Patel the consequences of using the controversial ‘pushback’ tactics would be ‘horrific’.

Kim Bryan, from the charity, told BBC Breakfast on Sunday that in the last two weeks her group had spotted, from the cliffs of Dover, Border Force officials practising a pushback using jet-skis.

Miss Patel has threatened to turn boats around and send them back to Europe as part of her ‘pushback’ plan.

However, French politicians branded the Home Secretary a ‘clown’, while Mr Darmanin claimed any action to send migrant boats back would be illegal.

The Home Office’s permanent secretary, Matthew Rycroft, last month told the Commons Home Affairs Committee only a ‘small proportion’ of boats could legally be turned back towards France using the tactics. He was also unable to tell when, or if, the policy would be put into practice.

The Labour MP told Sky News: ‘The Home Secretary needs to come clean because every single person risking their lives in that dangerous sea crossing of the English Channel is one too many.’

He said the fact that more than 1,100 people crossed to the UK in just two days across Friday and Saturday last week shows withholding money from France ‘clearly isn’t working’.

‘Whilst of course the patrols at the coast preventing people getting out onto the water and risking their lives is hugely important – of course it is – what I fear the Home Secretary misses is the fact that nobody becomes a refugee in northern France.

‘We need to be tackling the people smugglers and these vile criminal gangs further away from the coast as well.’

On Monday, Ministers insisted France will get £54million of funding for the Channel migrant operation – blaming ‘administrative’ issues for the delay.

Despite Priti Patel threatening to withhold the money unless Paris stepped up efforts to limit the flow, security minister Damian Hinds said it will be paid ‘in the coming weeks.

He denied there was any ‘political question’ over paying the cash, insisting the ‘administrative process’ had just taken time to work through.

But France has been making veiled threats about its activities to quell the problem, with interior minister Gerald Darmanin complaining that ‘not one euro has been paid’ of the pledged funds.

Asked about the delay in a round of interviews, Mr Hinds said: ‘Absolutely we are working closely with the French and I expect that question that you have raised to be finalised in the coming weeks.’

Home Office blew £6,757 in a month at Domino’s in Dover for migrants who had crossed the Channel

The Home Office spent £6,757 in one month on Domino’s pizzas to feed migrants arriving in the UK after crossing the Channel from France, figures show.

Hundreds of pizzas were bought from the Dover branch of the fast food chain in July, according to analysis of the government department’s spending.

The takeaways were provided while migrants were at Tug Haven – a short-term holding facility in Dover where they are first taken from the beach or sea.

The most expensive entry – £1,824 – said: ‘This was an urgent need to feed a large number of migrants that had been on the Tug Haven compound in Dover for over 12 hours, and were likely to stay over 24 hours due to issues blocking their movement with resources and the Irc (immigration removal centre) estate.’

He told BBC News: ‘I didn’t say it was an error, it is a process to be worked through when you are transferring what are very large sums of taxpayers’ money.’

But in a warning shot at the French, Mr Hinds said: ‘I would like to see increased activity, increased turnback (of migrants). France is a safe country. If you are seeking asylum, you should claim it in the first safe country you come to.’

Asked about Mr Darmanin’s comments, Mr Kwarteng told Sky News: ‘Well, all I can say is that we have worked very effectively with the French government so far.

‘We’ve had 300 arrests, we’ve worked with them to do that, there have been 65 convictions, and we both accept that there are something like 13,500 crossings that have been prevented through our working together, so it is a good collaborative relationship and we obviously want to improve that.’

Alarm has been growing about the situation, with more than 1,000 people making the dangerous trip from France to the UK in just two days last week.

After 10 days in which no crossings were possible due to bad weather, at least 40 boats managed to reach Britain on Friday and Saturday.

It came as Sky News footage last week showed migrants leaving Calais unchallenged by armed police – in what is likely to be a fresh blow to Anglo-French relations.

Dozens of people were seen piling into inflatable rafts, dinghies – and even a canoe – in their desperate bid to make it across the English Channel, with French security ‘stood by and watched’.

At the Tory annual conference last week, Miss Patel described France as a ‘safe country’ and reiterated her desire to ‘turn back the boats’.

After evading French security at first light, the migrants piled into dinghies and spent nine hours crossing the English Channel, before they were picked up by immigration officers.

Ruthless people smugglers have taken advantage of the warm start to October, with a recent surge in successful crossings reported across Kent in the past week.

But Sky News has reported French security ‘stood by and watched’ the scenes of chaos unfold from less than 100 yards away instead of intervening.

A group of approximately 10 officers allegedly stood idle as two separate groups of migrants piled onto inflatable boats that took up to 10 minutes to get their engines started.

In a later clip, a helicopter flown by French border control flies over the Strait of Dover, watching on as another caravan of migrants makes the treacherous journey.

French officials were said to be investigating patrol efforts on the French border in the wake of the footage, Sky News reported.

Tags: Bea, Dozens, land, migrants, of, on
You may also like
Celebrities News