The death toll of a jumping castle tragedy in Tasmania’s north has climbed to six, after police confirmed another child had succumbed to their injuries at Royal Hobart Hospital on Sunday.

Nine primary school children were seriously injured when a strong gust of wind lifted the jumping castle and ‘zorb’ balls they were playing in 10 metres into the air during an end-of-year party at Devonport’s Hillcrest Primary School.

The children were given first aid and rushed to hospital, but six could not be saved. Two remain in critical condition in intensive care and one has since been discharged and is recovering at home.

With the permission of the families, police on Friday named the five other children who died in the incident as Addison Stewart, 11, Zane Mellor, 12, Jye Sheehan, 12, Jalailah Jayne-Maree Jones, 12 and Peter Dodt, 12.

The Age understands the parents of one of the children in hospital were comforted by a local priest after being approached by doctors about turning off their child’s life support at the weekend. It is unclear whether it is the same child.

Heavy rain and winter-like temperatures did not dissuade Devonport locals from visiting the makeshift roadside memorial outside of Hillcrest Primary School in honour of the tragedy’s victims for the fourth day in a row on Sunday. 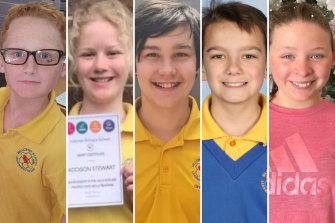 However, the usual steady stream of mourners over the past two days has slowed to a trickle, with parents and children zipping up their jackets and huddling under umbrellas as they placed fresh flowers on the lawn.

Among the latest tributes laid at the memorial was a model of a classroom attended by about a dozen teddy bears dressed in the Hillcrest Primary School uniform.

Inside the classroom, five teddy bears representing children killed in the tragedy, could be seen nestled among the arms of a larger bear.

The model was accompanied by the note: “Our hearts break with sadness… Never forget big bear will hold you tight forever. We love you all so much, you will never be forgotten.”

The grandfather of one of the children broke down in tears as he visited the site the 12-year-old boy was fatally injured for the first time on Saturday.

Richard Gardam, whose grandson Zane Mellor was among the first two children to be identified in the aftermath of the tragedy, held on to a tree as he wept on the school oval.

Family described the 12-year-old as an animal lover and gamer extraordinaire, who had a beautiful, caring and gentle soul.

“He was a fun-loving kid, he loved animals,” Mr Gardam told reporters during his visit to the memorial on Saturday. “I’m missing him terribly.”