The second witness to be called to the stand Tuesday in the trial of Derek Chauvin, the former Minneapolis police officer charged in George Floyd’s death, was 18-year-old Darnella Frazier.

Frazier, then 17, recorded the viral bystander video showing Chauvin pressing his knee into Floyd’s neck for several minutes outside of Cup Foods on the intersection of Chicago Avenue and East 38th Street, on May 25, 2020. The teenager posted the footage to Facebook, and it quickly went viral, evoking protests and rioting across the country last summer, as well as a national reckoning on race and police brutality.

Minnesota prosecutor Jerry Blackwell addressed Frazier on Tuesday by using only her first name, a rule set by the court given she did not turn 18 until recently and she is a senior in high school. The teenager described how she and her 9-year-old cousin were seen on security footage walking to Cup Foods that day when they encountered “a man terrified, scared, begging for his life.”

“When I look at George Floyd I look at my dad, my brother, my uncle because they are all Black. I look at that and I look at how that could be one of them,” Frazier told the court, as she began to audibly cry. “There have been nights I stayed up apologizing to George Floyd for not doing more, not physically interacting and not doing more.”

The prosecution showed the court a screengrab from officer-worn body camera footage showing Frazier and others as they gathered around the officers placing Floyd under arrest. Frazier identified herself in the exhibit as the individual seen in front of Cup Foods holding up her cellphone.

“I heard George Floyd saying ‘I can’t breathe,’ ‘please get off me,’ ‘I can’t breathe,'” Frazier told the court. “He cried for his mom. He was in pain. … He was terrified, he was suffering. This was a cry for help.”

Responding to Blackwell’s questioning, Frazier said she would not categorize the group of bystanders witnessing the officers placing Floyd under arrest as an “unruly crowd.” She testified that Chauvin did not remove his knee when the ambulance arrived, and a paramedic checked Floyd’s pulse. Frazier said people at the scene were not threatening and obeyed the officers.

The witness identified in a photograph the Minneapolis firefighter who came to the scene and asked to check Floyd’s pulse. Police did not allow her to pass. Frazier agreed she felt threatened by police at the scene, describing when an officer moved to take out Mace. 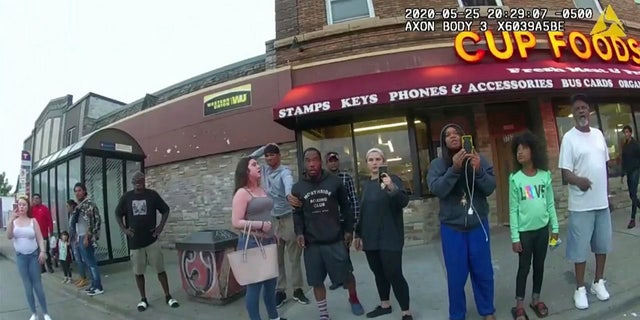 This image from a police body camera shows people gathering as former Minneapolis police officer Derek Chauvin was recorded pressing his knee on George Floyd’s neck for several minutes as onlookers yelled at Chauvin to get off and Floyd saying that he couldn’t breathe on May 25, 2020, in Minneapolis. Both Frazier and Williams are present. (Minneapolis Police Department via AP)

“I felt like I was in danger when he did that,” she said. “I didn’t understand why the Mace was even needed at all.”

She also said she believed Chauvin started kneeling on Floyd’s neck harder when the crowd shouted at him to stop, saying, “I feel like he was feeding off our energy.”

During cross-examination by Chauvin’s attorney, Eric Nelson, Frazier agreed that the crowd was getting louder and yelling during the incident at the scene when Officer Tou Thao had said to her “You can breathe if you can talk,” in reference to Floyd.

The witness agreed that the neighborhood can be rough. Nelson said Frazier posted the video she shot to social media and it went viral.

The attorney says “it changed your life,” and Frazier responds, “Yes, it has.”

In December, Frazier was presented with the PEN/Benenson Courage Award by the literary and free expression organization PEN America during a virtual ceremony to celebrate her “quick-thinking” and recognizing her as the “dauntless young woman who filmed the murder of George Floyd.”

“With nothing more than a cellphone and sheer guts, Darnella changed the course of history in this country, sparking a bold movement demanding an end to systemic anti-Black racism and violence at the hands of police,” PEN America CEO Suzanne Nossel said in a statement.

Earlier Tuesday, a man who was among the onlookers shouting at Chauvin to get off Floyd testified that he called 911 after paramedics took Floyd away, “because I believed I witnessed a murder.”

Donald Williams, a former wrestler who said he was trained in mixed martial arts, including chokeholds, returned to the witness stand a day after describing seeing Floyd struggle for air and his eyes roll back into his head. He said he watched Floyd “slowly fade away … like a fish in a bag.” 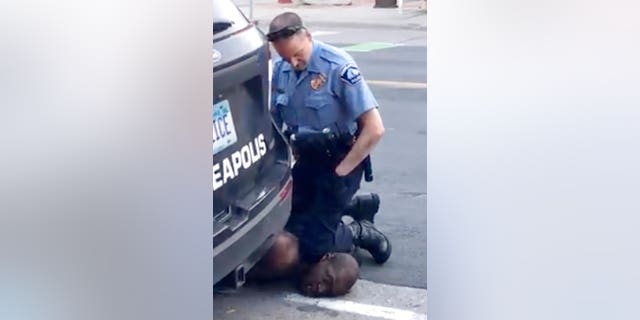 Prosecutor Matthew Frank played back Williams’ 911 call, on which he is heard identifying Chauvin by his badge number and telling the dispatcher that Chauvin had been keeping his knee on Floyd’s neck despite warnings that Floyd’s life was in danger. She offers to switch him to a sergeant.

As he is being switched, Williams can he heard yelling at the officers, “Y’all is murderers, bro!”

During cross-examination, Chauvin attorney Eric Nelson sought to show that Chauvin and his fellow officers found themselves in an increasingly tense and distracting situation, with the crowd of onlookers getting agitated over Floyd’s treatment.

Nelson pointed out that Williams seemed to grow increasingly angry at police on the scene, swearing at and taunting Chauvin with “tough guy,” “bum” and other names, then calling Chauvin expletives, which the defense attorney repeated in court.

Williams initially admitted he was getting angrier, but then backtracked and said he was controlled and professional and was pleading for Floyd’s life but wasn’t being heard.

Williams said he was stepping on and off the curb, and at one point, Officer Thao, who was controlling the crowd, put his hand on Williams’ chest. Williams admitted under questioning that he told Thao he would beat the officers if Thao touched him again.

Nelson also got Williams to admit that he personally has never trained police officers in chokeholds.

Fox News’ Ruth Ravve and The Associated Press contributed to this report.