Sick Australians who were blocked from boarding the first government repatriation flight from India will have priority to return home once they have recovered from COVID-19, but there are no plans to organise a separate flight for COVID-positive people at this stage.

Three federal government-chartered flights operated by Qantas are due to bring Australians back from India by May’s end. After that the plan is to operate at least one flight a week through June. 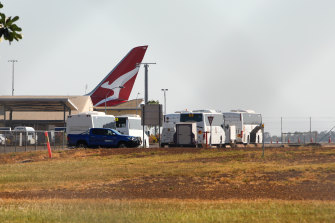 The first repatriation flight touched down at Darwin airport just before 9am local time on Saturday, with the passengers transferred 25 kilometres away to the Howard Springs quarantine facility.

Just 80 of the planned-for 150 seats were filled as 42 passengers tested positive for coronavirus while in a three-day mandatory pre-flight hotel stay in Delhi. At least 31 of their close contacts were also barred from the mercy flight.

The Department of Foreign Affairs is examining how to implement a reserve list for the next flight so it is not half-full, while trying to avoid a situation in which people’s hopes are raised and then dashed. It is understood the department had not expected such a high proportion of passengers to test positive. 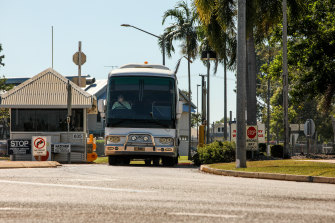 Passengers from the repatriation flight are transported to Howard Springs.Credit:Getty Images

Treasurer Josh Frydenberg defended the decision to leave COVID-positive Australians in India, rather than allowing them to board the first flight from India since the Morrison government’s temporary travel ban was introduced.

“We’re following the medical advice and ensuring that we protect Australians here and I’m pleased that first flight has arrived and, obviously, there’ll be more flights to come,” he said.

“We invoked the Biosecurity Act because of the need to protect Australians and to ensure that we were doing everything possible to prevent the spread of COVID.”

Prabhjeet Singh was one of the lucky 80 to make it onto the flight to travel home after more than two years separated from his wife, and baby son who he is yet to meet.

“I’m feeling really great actually,” he said from his cabin in Howard Springs on Saturday. 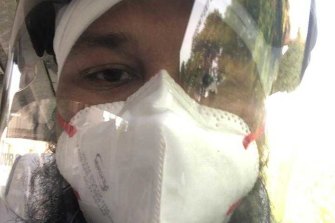 Prabhjeet Singh in mask and face shield while travelling in Delhi.

“I’m still calling all my family just to make sure everyone knows. I couldn’t tell anyone I was leaving until I was off the plane because it has fallen through so many time before.“

He said it was a relief to have finally boarded the plane, but the feeling was bittersweet. “Everyone was feeling lucky but also feeling sad about the people who got left behind,” he said. 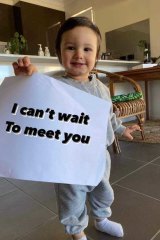 Prabhjeet Singh’s 17-month-old son River will meet his dad for the first time now Mr Singh has finally made it home to Australia.

India recorded more than 316,000 cases on Thursday, taking its total to more than 23.7 million confirmed cases. The country has recorded almost 260,000 deaths, but the real number is widely believed to be much higher.

At least 9500 Australians in India are registered with DFAT, and more than 950 are classified as vulnerable and 173 children separated from their parents.

A group of passengers complained on Friday that many had not been given their final COVID-19 test results before the Australian government announced a large cohort would not be boarding due to positive test results.

Opposition Leader Anthony Albanese criticised the Morrison government for the fact that more than 30,000 Australians remained in India, even though the Prime Minister had said he would bring Australians home by Christmas 2020.

The fact some Australians had not been able to board the now-resumed flights home was “an indictment of the federal government’s complacency and of Scott Morrison’s capacity to make an announcement and then forget about it”, the Labor leader said.

Another passenger, who also wished to remain anonymous, said he was now unable to travel to Australia as his wife had received a positive result just hours before the flight.

The couple had travelled more than 120 kilometres to Delhi to undertake the three-day hotel stay required for the repatriation flight. The man said neither he nor his wife had any symptoms before they came to the hotel and he was concerned the virus could have spread in the hotel.

“If it could happen in Australia why could it not happen in India?” he said.

While guests are not able to leave their rooms, the man said he had to use the airconditioner for relief in the hot Indian summer weather and was worried the virus could have spread that way.

“There’s no ceiling fan in here and the windows don’t open,” he said.

The pair will wait another two weeks, get tested again and apply to DFAT for another flight, he said.

The aircraft sent to rescue the stranded Australians arrived on Friday with 1056 ventilators and 60 oxygen concentrators to assist with India’s ongoing coronavirus crisis.

Meanwhile, 38 of Australia’s Indian Premier League cricket players and coaches in India are expected to start returning to Australia this weekend from the Maldives as the travel ban is lifted.

The rest of the Australian contingent flew to the Maldives last week after the IPL was postponed due to the virus breaking through the supposedly biosecure bubble set up by tournament officials to protect players and coaches.

This masthead revealed on Thursday plans for the group to quarantine in Sydney, rather than Howard Springs.

The government halted all direct and repatriation flights from India at the end of April as a third wave of coronavirus overwhelmed that country’s health systems.

It also banned people from transiting through other countries to get to Australia if they had been in India within 14 days.

Catch all the day’s headlines

At the end of each day, we’ll send you the most important breaking news headlines, evening entertainment ideas and a long read to enjoy.  Sign up to The Sydney Morning Herald’s newsletter here, The Age’s here, Brisbane Times’ here, and WAtoday’s here.

Tags: Australians, Blo, COVID-positive
You may also like
Celebrities News