The Delta variant still has a grip on the UK, with cases rising fast as people mingle more. 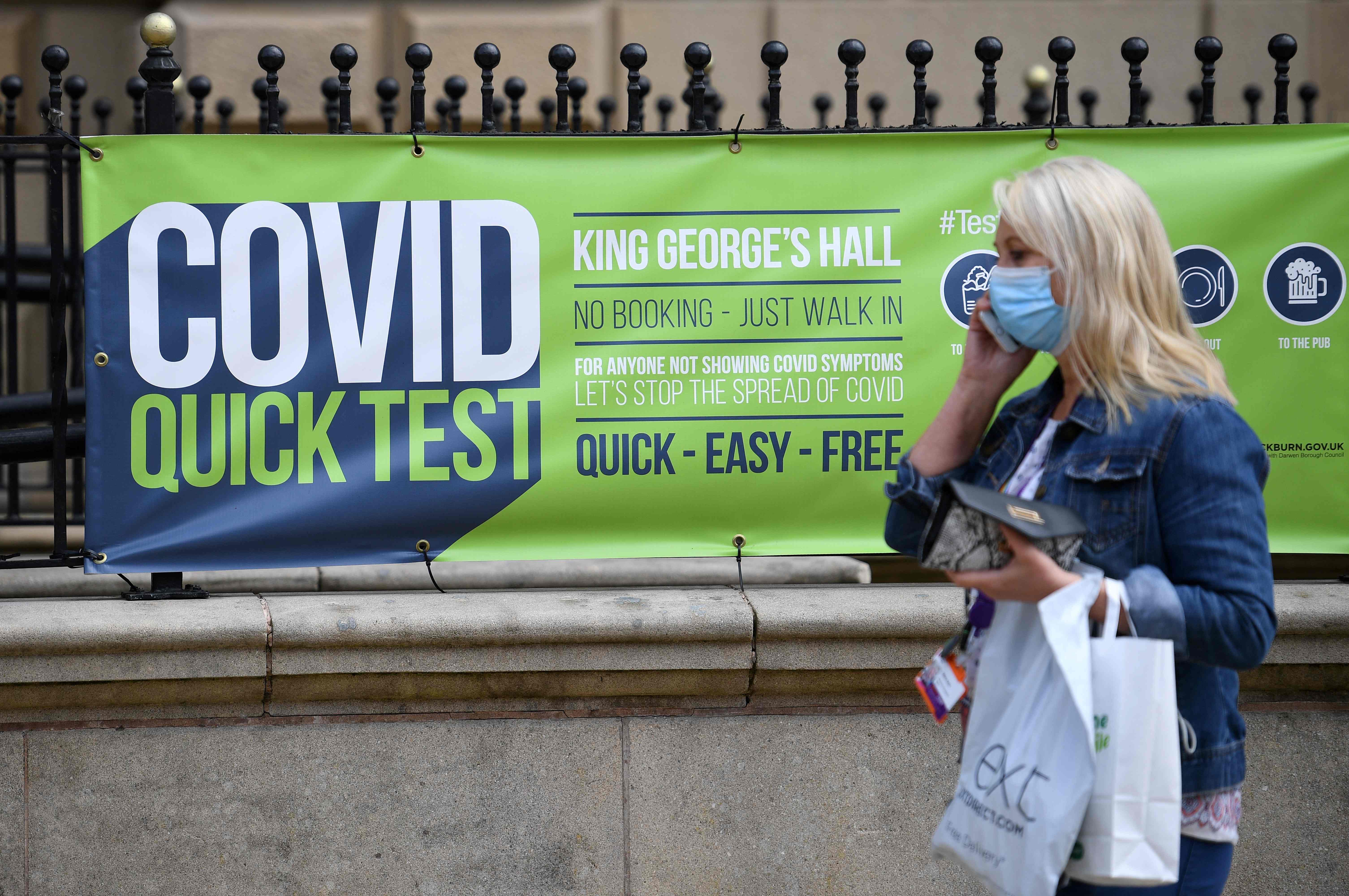 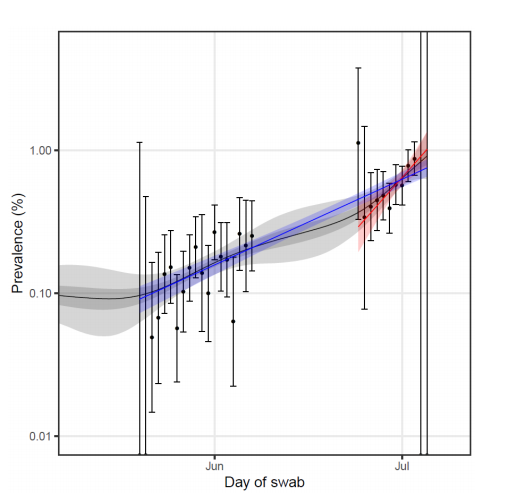 While infections are on the up, deaths and hospitalisations are low in comparison thanks to the vaccine rollout.

But experts have warned cases will continue to rocket, with it possible over 100,000 new daily cases could be reported just before we unlock on July 19.

The REACT study today revealed cases have surged four-fold in England since June and are doubling every six days.

With daily cases at around 29,000 currently, if it takes just under a week to double we will see around 120,000 daily cases by the day restrictions are lifted.

Around one in 170 people are testing positive for the virus now, they found.

But Imperial College London’s Professor Paul Elliott said: “We see in our own data the effectiveness of the vaccine and we certainly see it in the older population.

“We see much lower hospitalisation rates now than we saw in the second wave.”

The study showed 0.35 per cent of double-jabbed under-65s are testing positive compared to 1.15 per cent of those without a vaccine – showing 70 per cent protection.

But Prof Steven Riley added: “Even though the vaccine is effective, it's a fantastic vaccine but it's not a perfect vaccines, the proportion of people from round 12 to 13 that are vaccinated that are testing positive is increasing.

"We are not seeing the absence of infection in the vaccinated group, we are seeing growth."

The experts said the rise is due to Delta being more infectious and playing more of a role alongside social mixing.

They found women have 30 per cent less chance of testing positive in their latest data – suggesting men have been mingling more.

Prof Riley said: "The difference that could be affecting it the degree to which men and women are socialising is likely to be responsible, and because of the timing of that it could be that watching football is resulting in men having more social activity than usual."

On Monday Boris Johnson confirmed the final unlocking will go ahead in two weeks, despite the rise in cases. 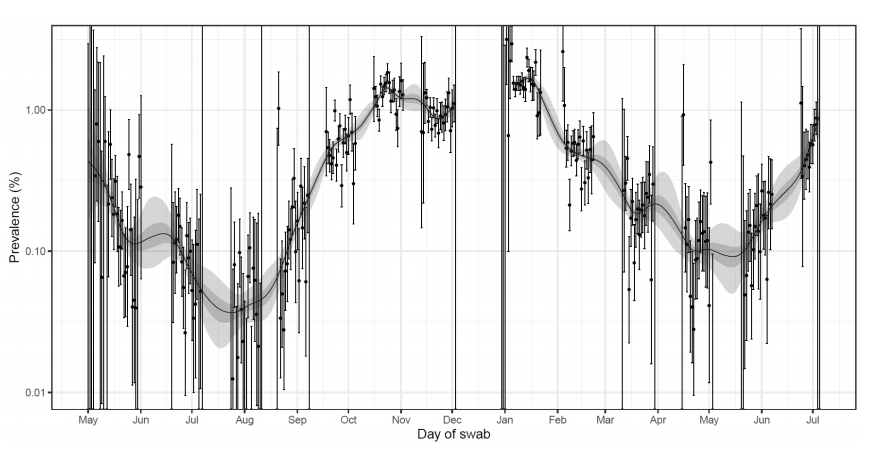 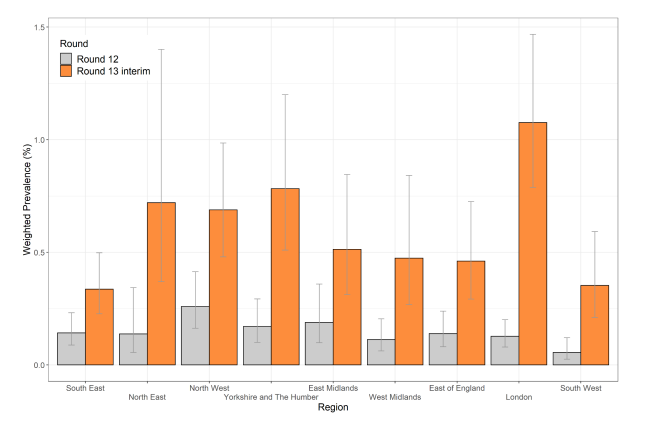 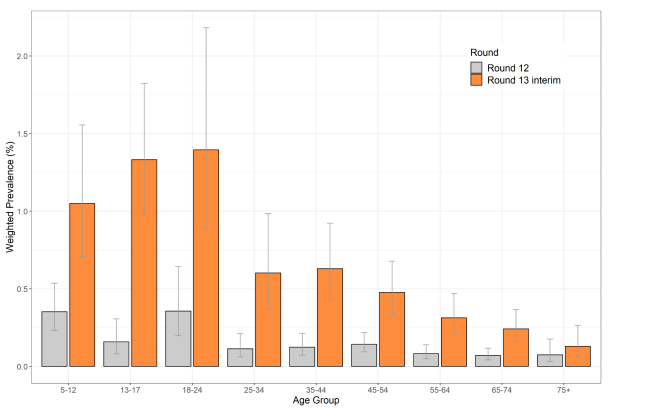 He said: "This pandemic is far from over, it certainly won't be over by the 19th.

"We are seeing cases rise fairly rapidly, there could be 50,000 cases detected per day by the 19th and as we predicted we are seeing rising hospital admissions, and we must reconcile ourselves to more deaths from Covid.

"There's only one reason why we can contemplate going ahead to step 4… and that's because of the continuing effectiveness of the vaccine rollout."

It was reported today cases in the UK have now reached their highest levels since January.

A further 32,548 infections were reported as 33 more Covid deaths were recorded.

Hospital admissions hit over 400 yesterday in the highest rise since March, jumping 20.9 per cent on the 269 recorded a week before.

The number of coronavirus deaths reported yesterday is also the highest number of fatalities the UK has seen since April 23.

It comes as nine out of 10 Brits now have some immunity against Covid, tests show as a top Oxford scientist threw his weight behind ending lockdown this month. 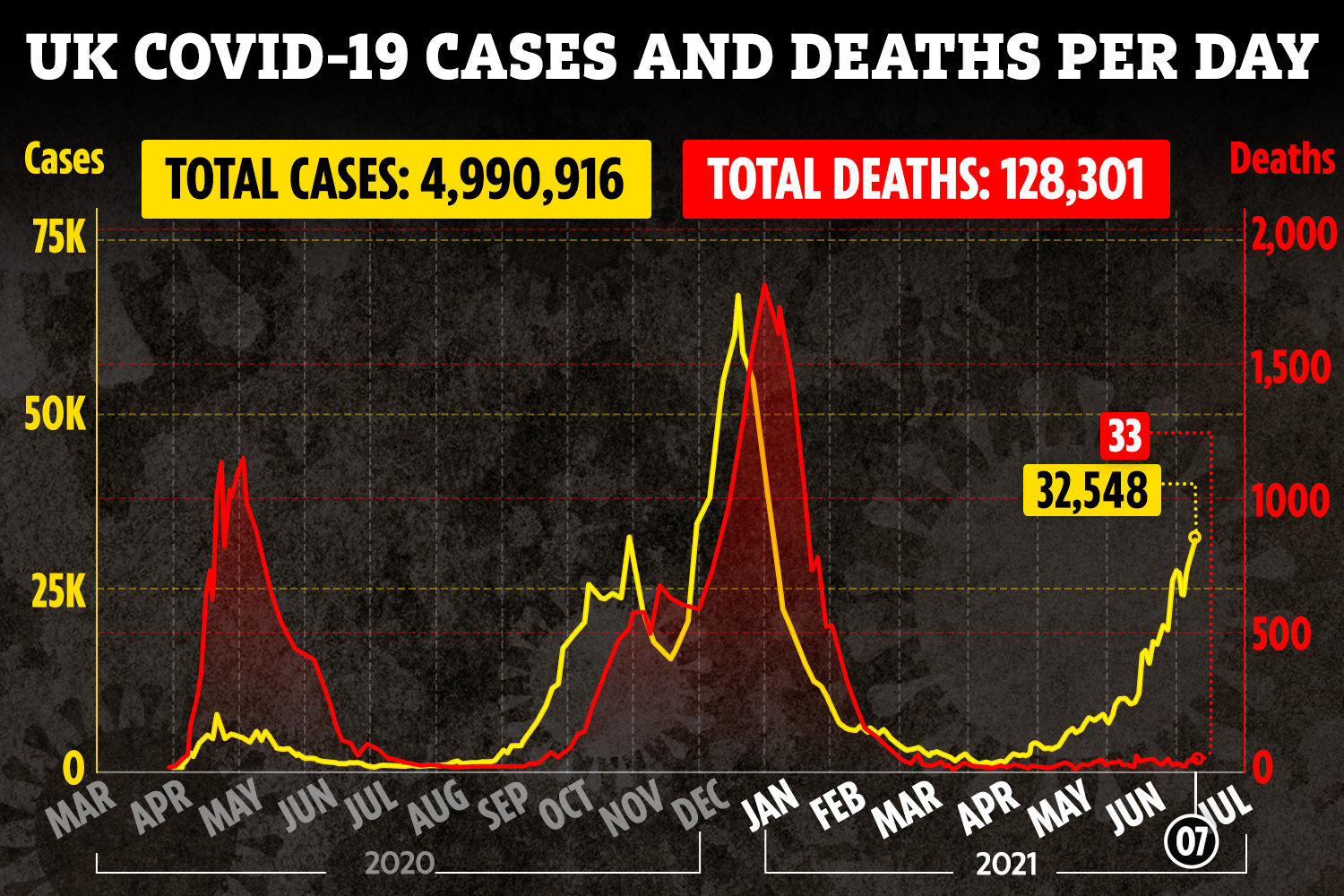 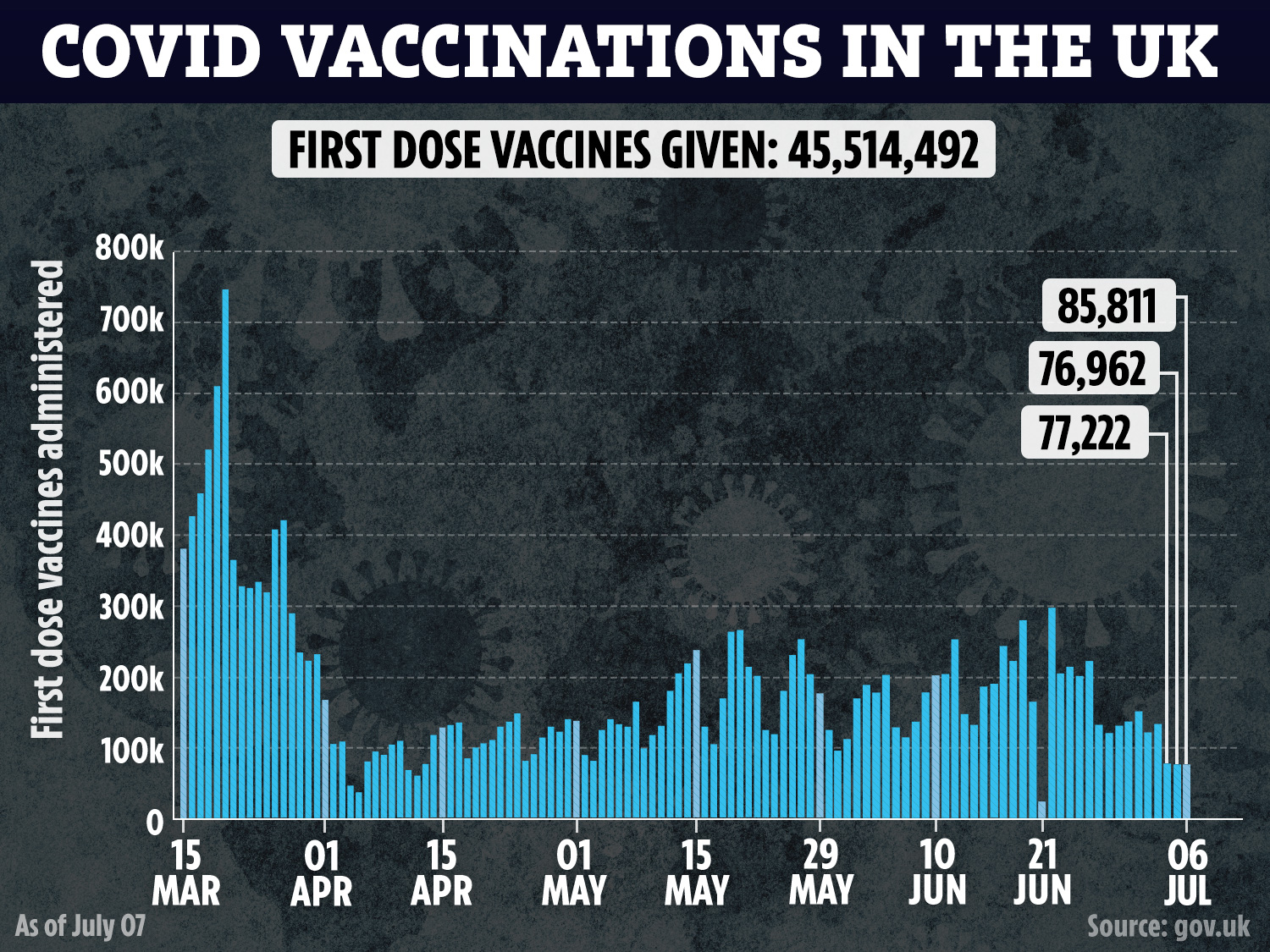 The Office for National Statistics said 90 per cent of adults in England now have antibodies against the virus.

Sir John Bell, a medicine professor at Oxford University, said promising figures mean there is “no reason to wobble” on reopening on July 19.

He said: “It really looks like the vaccines are holding their own.

“If you're doubly vaccinated, almost in every age group, the likelihood of hospitalisation and death is very small indeed.

“I think that's what the government is counting on and I see no reason to wobble. It is a terrific success story.”

The ONS report showed immunity is highest in people over the age 50 – who got their jabs first – but rising sharply among all over-25s.

A total of 34million people in the UK are double-jabbed already and another 12m have had their first vaccine.

Testing positive for antibodies does not mean people will never catch Covid but makes it less likely they will die.

Health and Social Care Secretary Sajid Javid said: “As we unlock society and learn to live with Covid-19, we will inevitably see cases rise significantly over coming weeks. But today’s finding show that infection rates are three times lower for those who have had two vaccine doses.

“It is more important than ever to get that life-saving second jab so we can continue to weaken the link between cases, hospitalisations and deaths and build a wall of defence against the virus.

“As we move from regulations to guidance and get back to our everyday lives, see our loved ones and return to work, it is vital people practice good sense and take personal responsibility for their own health and those around them.”

Tags: £120, could, covid-, hit, infections
You may also like
Celebrities News