Life’s a beach… and then you tie the knot! Couples will be able to wed at the seaside under new plans to overhaul marriage rules

Having a chippy dinner nicked out of your hands by a seagull may not be top of the wish list when planning your wedding.

But couples could soon be allowed to tie the knot on the beach under proposals to abolish Britain’s ‘outdated’ marriage rules.

The Law Commission wants to rip up current regulations – which date back to 1836 – and allow weddings to take place in ‘any safe and dignified location’ including parks, forests and cruise ships.

The move would allow families to put on cheaper weddings amid the cost of living crisis and will also help address the Covid backlog, the commission said.

Under current rules, marriages can only take place in a register office, a religious building or in the grounds of approved premises. Couples must also choose between a civil or religious ceremony.

But the commission has described the laws as ‘confusing, out-of-date and restrictive’ and called on the Government to rewrite them to allow greater choice for couples. 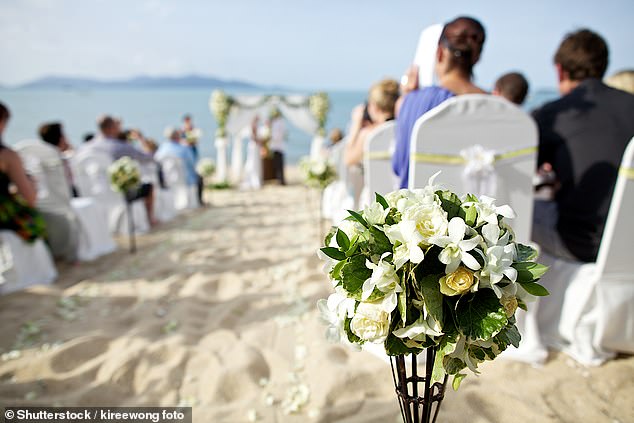 Couples could soon be allowed to tie the knot on the beach under proposals to abolish Britain’s ‘outdated’ marriage rules as the Law Commission wants to rip up current regulations from 1836, instead allowing weddings to take place in ‘any safe and dignified location’ (file photo)

The legal body has proposed new rules which would regulate the person officiating the service, not the location it takes place in. The changes, if agreed to by the Government, would also allow families to have more say over their vows, rituals and songs. They would also allow humanist weddings to become legally binding.

The commission said its proposals would represent the biggest overhaul of wedding law since the 19th century and would bring England and Wales in line with other countries such as Scotland, Ireland and New Zealand.

Professor Nick Hopkins, family law commissioner at the body, said: ‘The current law on weddings is not working for many couples. Needless restrictions and outdated regulations mean that thousands each year are denied having a wedding that is meaningful to them.

‘Our reforms for Government are designed to protect the established practices and dignity of weddings, while offering couples more choice on where and how they marry.’

Stressing that there is ‘widespread precedent’ for the reforms around the world, he added: ‘By giving couples more control over their weddings and ensuring greater parity for all beliefs, the law can support those who want to get married, rather than putting unnecessary barriers in the way.’