Shanghai: About 70 people are trapped after a five-storey hotel being used for coronavirus quarantine collapsed in the port city of Quanzhou in southeast China, state media said.

A live video stream posted by the government-backed Beijing News site showed rescue workers in orange overalls clambering over mounds of rubble and carrying people towards ambulances gathered around the site. 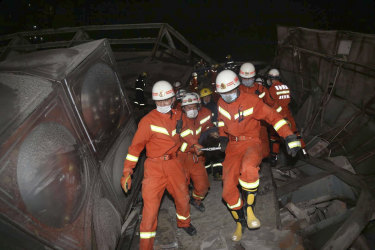 Rescuers evacuate an injured person from the rubble of a collapsed hotel building in Quanzhou city. Credit:

"I'm under quarantine too (at another hotel) and I'm very worried, I don't know what to do. They were healthy, they took their temperatures every day, and the tests showed that everything was normal."

The official People's Daily said the hotel had opened in June 2018 with 80 rooms.

Quanzhou is a port city on the Taiwan Strait in the province of Fujian with a population of more than 8 million.

The Fujian provincial government said that as of Friday, the province had 296 cases of coronavirus and 10,819 people had been placed under observation after being classified as suspected close contacts.

Tags: Coronavirus, hotel, I, quarantine
You may also like
Celebrities News