Coronavirus panic has sparked violence in France with shoppers filmed brawling over keeping a safe distance in supermarket queues, while others panic-buy baguettes.

Two shoppers were filmed brawling outside a supermarket in the commune of Viry-Chatillon in the southern suburbs of the French capital Paris yesterday.

In the video, two men are seen scrapping in the queue before others jump in and separate the pair. 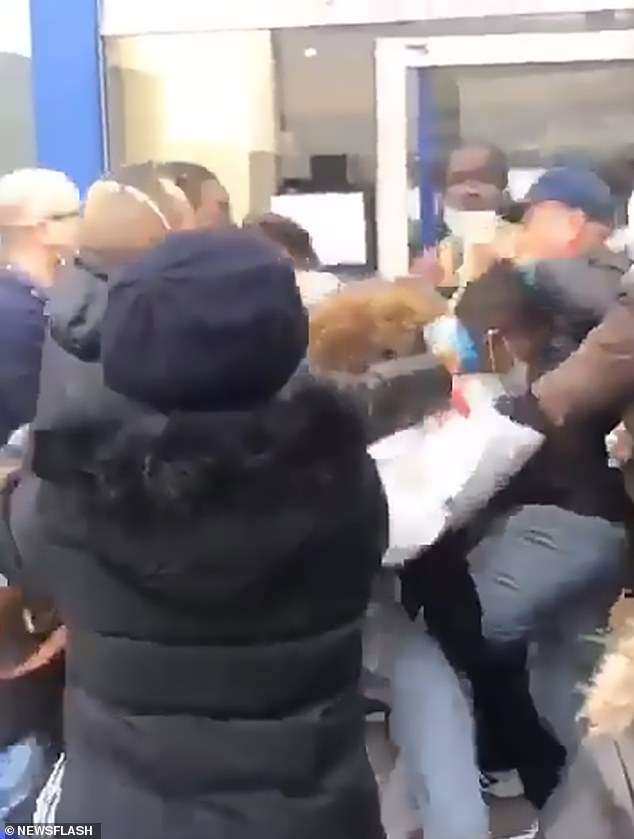 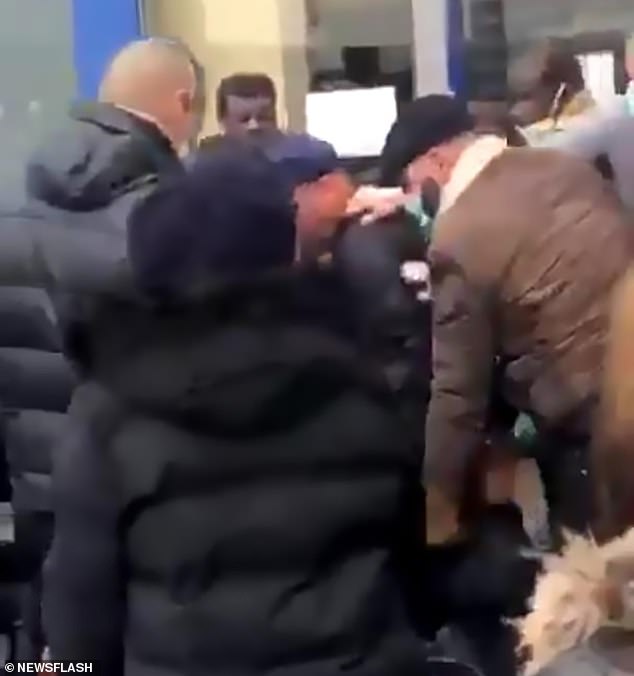 One of the fighters, in the blue hat, can be seen in the middle of the scrap at a Paris supermarket yesterday 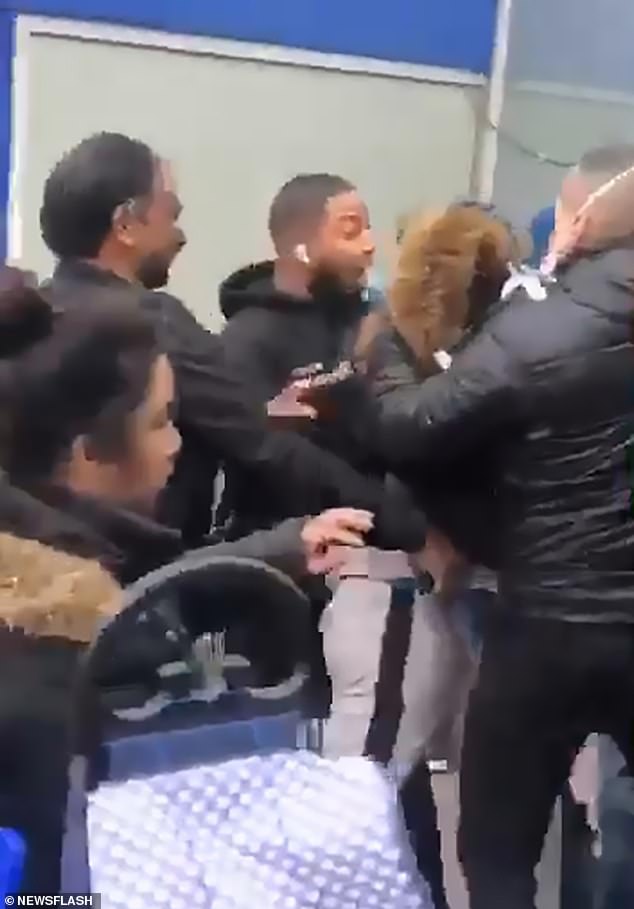 To the right, the two men can be seen brawling at the supermarket in Paris’ southern suburbs yesterday

According to local media, the fight started during a row about keeping a safe distance in public places during the COVID-19 lockdown in France.

An eyewitness said that the men had been in the queue for ‘probably an hour’ as it was moving very slowly.

The witness explained: ‘Around the queue, people kept saying that distances had to be kept.’

According to local media, one of the brawlers had to be pushed away by two security guards employed by the supermarket to cope with the large queues. 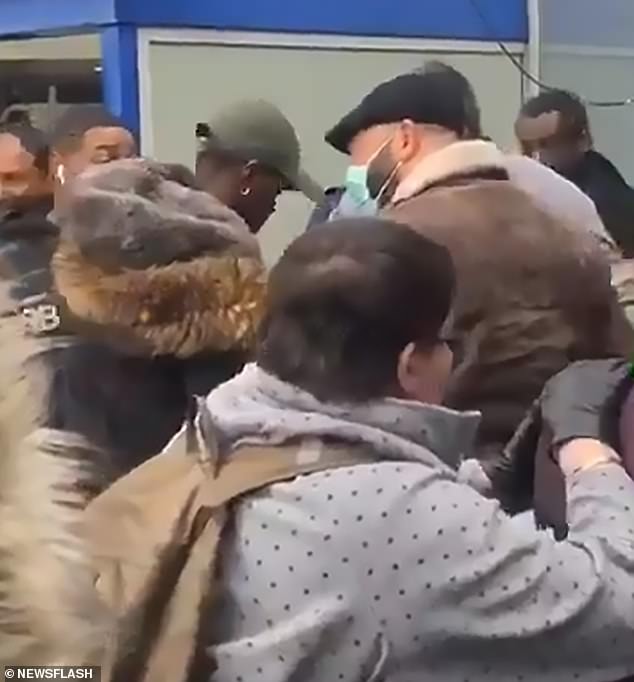 Meanwhile, the Evry public prosecutor’s office has confirmed that police attended the scene and that no one filed a complaint.

A spokesperson for the office said: ‘No victims came forward, there were no apparent injuries and there was no complaint.’

Reports said that there have been long queues at supermarkets since French president Emmanuel Macron announced a lockdown to prevent the spread of COVID-19 which began on 17th March.

As anxious consumers around the world stockpile toilet paper and pasta, the French are thronging bakeries for baguettes, fearing a shortage of their daily bread as they wait out the coronavirus epidemic in confinement.

The country of 67 million people consumes nine billion of the long loaves every year, has an annual competition for the best baguette in Paris, and a special word for the pointy end they chew off on their way home from the baker after work: the crouton.

Bakers are among the few essential-service businesses allowed to stay open in France under strict anti-virus confinement measures that took effect on Tuesday. 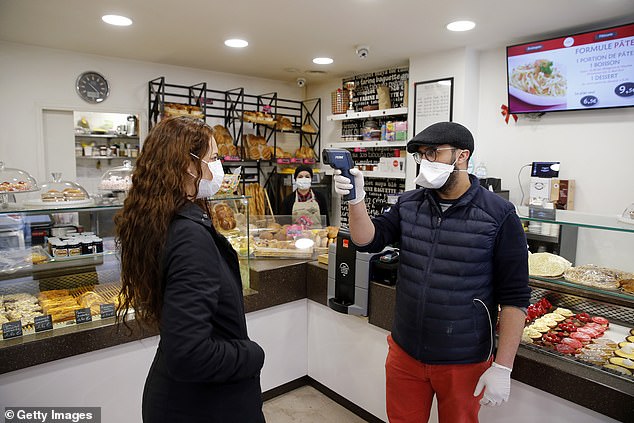 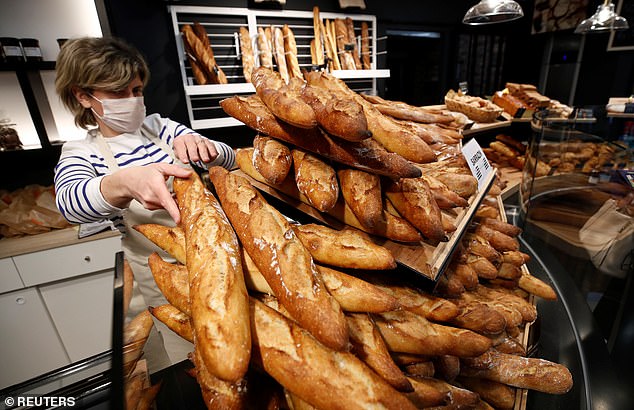 An employee, wearing a protective face mask, displays some baguettes at the bakery ‘Ma Boulangerie’ in Vertou near Nantes as France faces an aggressive progression of the coronavirus disease (COVID-19), yesterday

And they are thriving, with long lines in the cities and countryside alike.

‘Our numbers have doubled since Monday,’ Addenour Koriche, sales manager of a bakery attached to a large supermarket north of Paris, told AFP on Wednesday.

‘We are now on 800 baguettes per day. Yesterday, for example, we had no baguettes left to sell by 3:00 pm.’ The store closes five hours later.

The bakery sported newly-applied black lines on the floor, improvised with lengths of tape, to help customers respect the suggested one-metre (3.3-foot) safety distance to limit spreading the virus that has sickened more than 7,700 people and killed 175 in France.

A brand-new perspex screen shielded the vendor – wearing latex gloves but no face mask, and atypically using tongs to handle the bread – from a steady stream of customers. 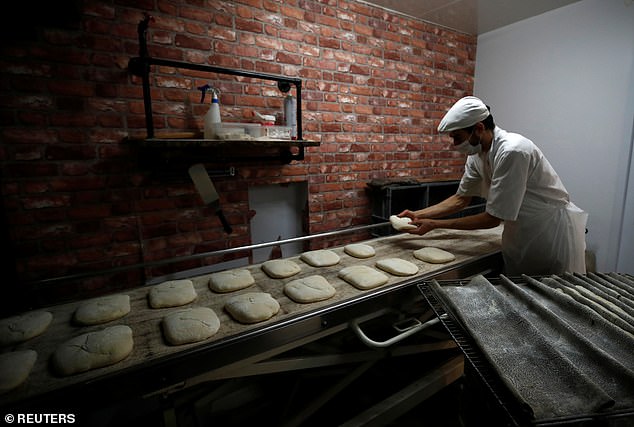 French baker Sylvain Cabane, wearing a protective face mask, takes out of the oven a tray of baguettes at the bakery ‘Ma Boulangerie’ in Vertou, near Nantes, as France faces an aggressive progression of the coronavirus disease (COVID-19), yesterday

‘We have people who normally take a half a baguette or one baguette per day, who are now taking four or five to freeze them in case even stricter confinement measures are announced,’ said Koriche.

On Tuesday, France’s labour ministry approved a special waiver allowing bakeries to be open seven days a week instead of the legal limit of six days.

‘The waiver will allow the French to buy bread without stress every day,’ noted Matthieu Labbe of the Federation of Bakeries.

‘We’ve seen people come in who want to buy 50 baguettes at a time. There’s something like a psychosis in some people.’

Labbe said there need be no concern over supply, even as some bakers have taken to placing a limit on sales per client.

‘We have flour, yeast and salt. There is no problem to produce bread.’

There are 33,000 bakeries in France, one to about 2,000 people on average, but most neighbourhoods boast several – sometimes even in the same street.

US-born historian Steven Kaplan, himself a trained baker, said French bread consumption has decreased dramatically – from about 600 grammes per person per day in 1900 to about 80 grammes today.

But despite bread no longer being viewed as a bare essential, it is engrained in French culture, even its politics – a source of pride and cultural exceptionalism.

‘The welfare state is first sketched out in France as a state that assures people its bread,’ said Kaplan, who lives in Paris.

‘Bakeries have always been a quasi public service,’ he added, noting that during the privations of World War One and Two, bread once again took its place as the main source of nutrition. 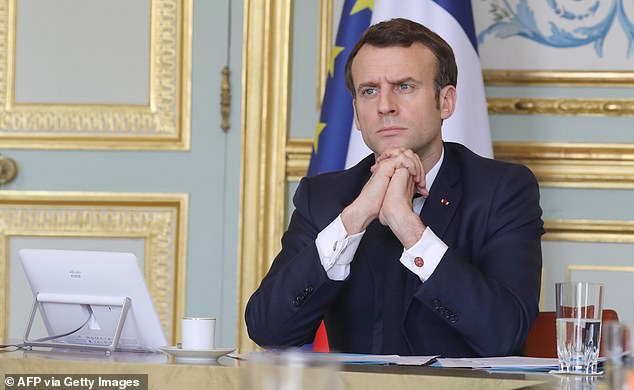 On Monday, President Emmanuel Macron (pictured today in Paris) sought to impress upon the French that they were engaged in a ‘war’ against the coronavirus, using the word several times in a televised address to the nation

On Monday, President Emmanuel Macron sought to impress upon the French that they were engaged in a ‘war’ against the coronavirus, using the word several times in a televised address to the nation.

‘In a war context we are confined, we have an enemy – the enemy is invisible but its still the enemy – we have to fight it and in this context when people are worried about obtaining food… the return to bread is in some sense a quasi-instinctive or almost atavistic return to something familiar,’ said Kaplan.

Dominique Anract, president of the national confederation of bakeries and pastry shops, said the industry employed 180,000 people in France.

‘Bread is food, but it is also a social link between people. Some people have the habit of coming to the bakery every day for a chat.’

For the French, ‘bread is a reassuring staple food even though with globalisation habits have changed,’ he said.