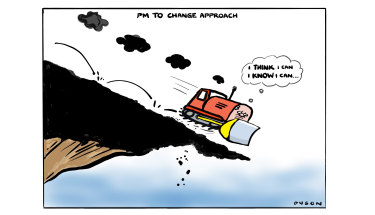 The editorial ″⁣Think about climate change when you vote″⁣, 13/5) is spot on. I dare to believe that it encapsulates the views of most of your readers. The challenge is to persuade those who either swallow contrary views in other media or remain disengaged from the issue to take climate action seriously and vote accordingly. There’s an alarming proportion of people who are still undecided even as election day looms. Time is running out, not just for deciding on one’s candidate or party of choice but for taking the steps we need to promote the wellbeing of the planet for future generations. Life as we know it is at stake.
Tom Knowles, Parkville

Stop kicking the environment around
I applaud the editorial for correcting some of the many political furphies around climate and energy. In a democracy where it is legal for political advertising to be misleading, misinformation and slogans are rife, and it is difficult for Australians to know whom and what to trust to make an informed vote.
Sadly, climate is again a political football that the major parties are unwilling to catch and kick for goal. It is a sorry state of affairs, particularly when we have overwhelming scientific consensus that the very climate and environment that we rely upon to live and thrive is changing at a rate that threatens our very existence. ’
Amy Hiller, Kew

Vote for the future of the children
The editorial is indeed timely. Just this week we have news of the shocking level of bleaching on the Great Barrier Reef and yet another episode of flooding for the already suffering people of Queensland who are still cleaning up after the last flood. As voters go to the ballot box one hopes that they will take into account each party’s stance on climate action. Clearly the outlier is the current government, which has shown little interest in tackling climate change due to the influence of the National Party. I will vote for my children’s and grandchildren’s futures. I hope others will also do the same.
Ross Hudson, Mount Martha

Action needs to be taken, fast
Climate science demands strong fast, decarbonisation and the increase in renewables by 2025, the new government’s very term. That means voting now for climate-acting candidates and not the fossil fuel-fixated, hypocritical Coalition.
Barbara Fraser, Burwood

Let’s shout it from the roof tops
Despite unprecedented levels of voter interest in climate action, our leaders dance around the climate elephant in the room. Yet, as noted in the editorial, there is, in fact, “a significant difference between the two parties”. Let’s shout that from the rooftops and remind all that “climate change policy should be one of the key issues for voters in this election”.
Karen Campbell, Geelong

The teal thing
If anyone knows anything about “fundamental lies” it should be John Howard (“Teal bid contains a fundamental lie: Howard”, 13/5). This is the prime minister who led Australia into the war in Iraq justified by the “weapons of mass destruction” lie. This is the prime minister who rode the “children overboard” lie to victory in the 2001 election. He now labels the independents as liars – presenting themselves as true liberals but whose success will bring down the government.
I haven’t read anywhere that the independents see themselves as “true liberals”.
Rather they have taken the highly principled decision to support action on critical issues that this government is not addressing.
No lie there Mr Howard. Just a refreshing, transparent option that is appealing to many voters.
Peter Thomson,
Brunswick

Missing the point
When John Howard says the teal campaigns contain a fundamental lie, I think he really misses the point of what voters see.
After at least two or three governments where I see that the only electorates that actually get any money spent on them are the ones that are in marginal seats, I’m going to put my vote to the other team.
I’m in a safe seat. But both parties ignore the safe seats. I don’t want to be in a safe seat. I want to be in a marginal seat. I want three separate car park upgrades at my local station, rather then fighting for the last space at 7.15am.
This year, my vote goes to whoever is not sitting, because I don’t want to be in a safe seat.
June Gardiner, Pascoe Vale

Our values, our vote
As a self-funded retiree who has benefited over the years from government policies, there is no room for self-interest when voting this year. It’s time for a conscience vote, standing up for people who are struggling and need systemic policy change urgently, addressing cost of living rises, homelessness and violence towards women and children. It’s time to reflect our values via our vote.
Robyn Stonehouse,
Camberwell

Morrison’s legacy
Peter Beattie (Comment, 13/5) asks why the talented teal female candidates cannot ″⁣run for parliament without them being character-assassinated″⁣. This could be said for all candidates running in elections; except for the teals, the Liberals have deployed a new tactic. By saying, should the teals unseat their moderate Liberal opponents, it will be their fault for the Liberal Party moving further to the right.
The subtext, whether intentional or not, sounds like a collective LNP male reaction of ″⁣look what you will make us do″⁣. No reflection on how their party got to this point and that they may have a ″⁣women problem″⁣. It could well be Scott Morrison’s legacy.
Peter Thomas, Pascoe Vale

More to reading
In apropos to phonics teaching, it has been promoted as the panacea of the only way to effectively teach reading. One point is that learning a sound system and words made up of that does not make a reader. I could be taught to read French that way and be given a text and be able to read it with no understanding (barking at print). Reading requires more, it requires an understanding of syntax (grammar) and semantics (meaning). These should be taught together with phonics. However, I challenge the ability to use phonics for the following words: was, you, says, through, bough, enough, just to highlight a few of the anomalies in English.
Frances McKay (former English teacher), Kensington

Ties that bind
I might vote for Anthony Albanese as he dresses with a proper tie knot instead of that asymmetric, skew-whiff, untidy, schoolboy-style tie knot that Scott Morrison and Josh Frydenberg persist with.
Trevor Street, Park Orchards

Finding commonsense
The electorate gets the government it deserves.Democracy is a chaotic process and is the worse form of government except for all the others (Winston Churchill). I admire the teal independents for their passion and idealism in highlighting the existential risk of climate change. However, electing any of them at this time of global instability is a recipe for a hung parliament. While their cause is very important, it does not justify abandoning the other major issues facing the country.
Commonsense would suggest electing one of the major parties with a workable majority and an evenly balanced Senate. The only problem with commonsense is that it is not all that common.
Anthony Cass, Canterbury

Swastika tattoos
How will the new swastika laws deal with those who display their swastika tattoos on their visible skin?
Mike Pantzopoulos, Ashburton

Danger unmasked
A recent tram trip has left me puzzled. On the tram, a group of authorised officers chatted among themselves, while various happily unmasked passengers relaxed nearby. When I asked one of the officers about his power to enforce mask-wearing, I was told “there’s no point – they’ll just claim they’re exempted”.
If a passenger hasn’t paid for their trip they are fined. However, if they’re unmasked, the most they might get is a reminder of the rules. Given the rapidly rising number of COVID deaths this year, and the danger that unmasked people pose to the more vulnerable among us, why is this selfish behaviour considered acceptable?
Carol Skinner, Fitzroy

Walls of art
Robert Nelson’s review of Flash Forward (13/5) gives me great hope that the walls of Melbourne may be covered with good art rather than the hideous photo-real portraits that seem to be appearing as murals everywhere in the city and on silos in regional Victoria.
Les Peach, Warrandyte

Look to Scotland
Your correspondent (Letters, 13/5) notes the failure of various government initiatives to address the housing crisis and urges a new co-ordinated strategy to increase supply and affordability. In Scotland, government strategy requires that all housing developments include a proportion of ″⁣affordable″⁣ dwellings, the benchmark being 25 per cent. This is negotiated between the developer and the local authority, ensuring that the contract is responsive to local economic conditions. The affordable houses, which may be detached houses, flats or townhouses, are intended for people on modest incomes and remain in this category. They cannot be sold on at inflationary prices. Some of these houses are bought by registered social landlords who then let them at affordable rents.
The policy has several goals, including to vary the demographic in new housing developments and to ensure that key workers on low to moderate wages can live within reasonable travelling distance of their work.
There has been no suggestion that this policy prevents developers from operating at a healthy profit.
Frances Knight, Castlemaine

The wage equation
If we give another dollar to the lowest paid, it will be spent as they still often struggle after paying for food and rent. If we give tax cuts to the wealthy it may or may not be spent. It becomes discretionary spending.
Increase the minimum wage if we want spending to increase.
Lou Ferrari, Richmond

Clarification
A letter published yesterday headed ″⁣Symbolic gesture″⁣ referred to William Shirer’s Rise and Fall of the Third Reich as a proscribed text. It should have said prescribed. The error was made in production.

The election
Scott Morrison is promising 1.3million new jobs. Going by the definition of “employed”, this could be 1.3 million $20.33 an hour one-hour jobs.
Jenny Bone, Surrey Hills

It might be easier to lift the minimum wage if there was also a maximum wage.
Christine Weatherhead, Glen Waverley

The term “cost of living” says it all. If a society cannot guarantee a worker enough to live on, then it is not a humane society.
Kevan Porter, Alphington

Scott Morrison describes himself as “a bit of a bulldozer”. I disagree, he’s a compulsive bulldozer.
Dennis Richards, Cockatoo

John Howard says that ″⁣teal campaigns contain a fundamental lie″⁣. Does he mean like the ones about weapons of mass destruction and children overboard?
Robert Henning, Clifton Hill

How hard is it for John Howard to understand that while the teals may be backing the Labor Party, the UAP will be supporting his Liberals?
Bruce Dudon, Woodend

I thought no one in the Coalition had taken responsibility for organising a campaign launch, but then realised it is just running late.
Joan Segrave, Healesville

In such difficult times, Australia Post is doing an incredible job of getting postal votes out. We should give them a gold watch.
Lindsay Donahoo, Wattle Glen

Advertisements sledging your opponents are not a substitute for actual policy statements.
Marsha Merory, Ivanhoe East

The cuts in foreign aid by the Coalition in the past nine years are a disgrace. We should be doing a lot more to help our Pacific family.
Dan Drummond, Leongatha

Finally
Verily, thy self too doth harken for a lexicon immutable.
Peter Rushen, Carnegie