A protester at a Black Lives Matter demonstration is facing jail after police officers ‘ran for their lives’ when he hurled pieces of barrier at them during protests in Downing Street, a court heard.

Charity worker Shayden Spencer, 20, was caught on CCTV throwing parts of the fence during the ‘unruly’ incident on June 3 last year.

The Black Lives Matter Movement – sparked by the killing of George Floyd in the US at the hands of a white officer – spread rapidly across the globe in 2020.

Demonstrations erupted across the UK throughout the summer and, while most protests remained peaceful, some ended with violent clashes with the police. 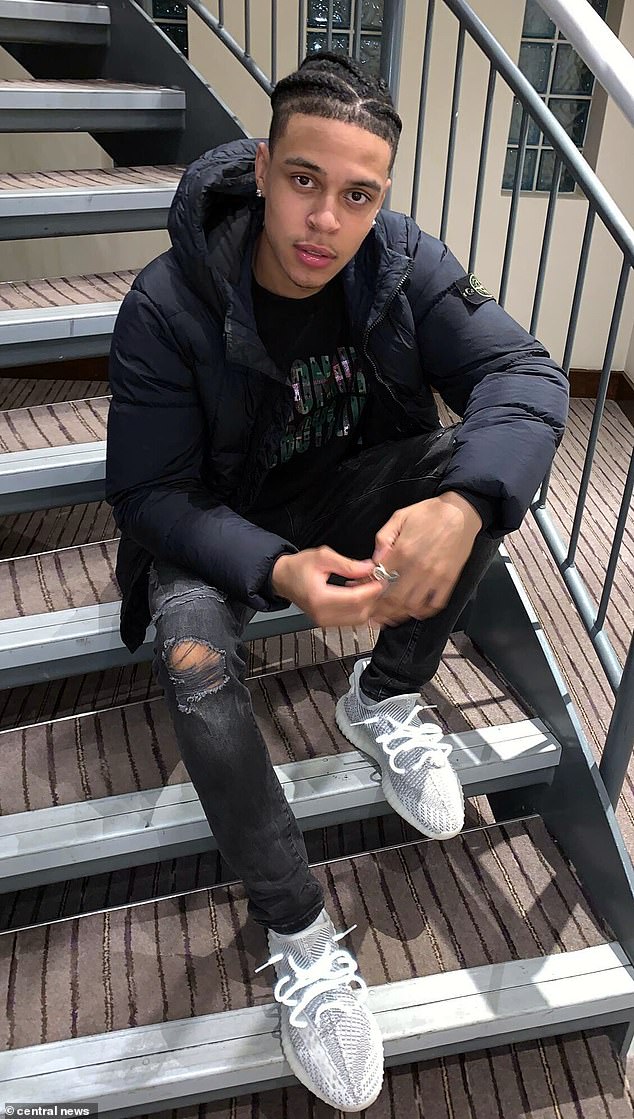 Shayden Spencer, 20, (pictured) was caught on CCTV throwing parts of the fence during the ‘unruly’ incident on June 3 last year during the Black Lives Matter protests 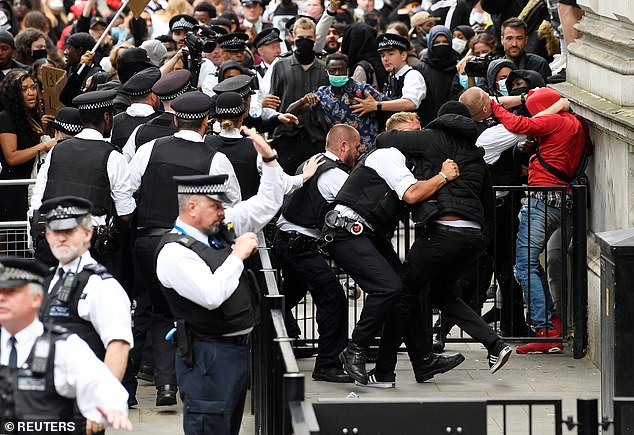 Police officers reportedly ‘ran for their lives’ when Spencer hurled pieces of barrier at them during the demonstration in response to the death of George Floyd in Minneapolis, US. Pictured: Protesters and police officers clash near Downing Street during a BLM protest in June

In June, a female police officer was injured when protesters hurled projectiles and flares at her horse which bolted and sent her into a traffic light in Whitehall.

Spencer pleaded guilty to violent disorder and was bailed ahead of his sentencing next month.

In his hearing today, Prosecutor Tyrone Silcott said: ‘After the police retreated, not sprinting for their lives but they are clearly moving with some speed, they are walking quickly, it is clear they are moving because they are concerned about the group who are in the area.

‘During this incident the defendant is seen clearly to walk towards the waist-height barrier and throw a piece of barrier that had been broken up. 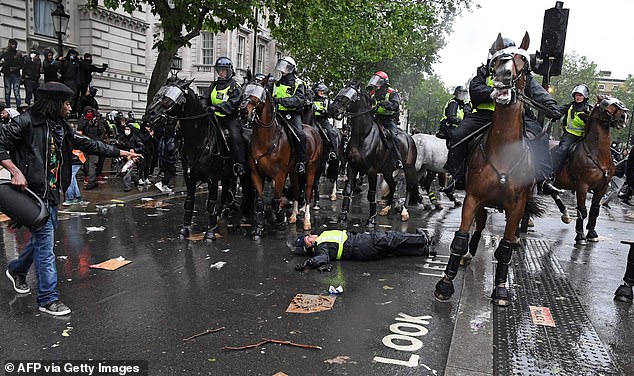 A female police officer was injured in June when protesters hurled projectiles and flares at her horse which bolted and sent her into a traffic light in Whitehall. Pictured: The mounted police officer lay on the road after being unseated from their horse on Whitehall, near the entrance to Downing Street in June

‘He then returns 55 seconds later and does exactly the same thing,’ said the prosecutor.

‘That’s it – his involvement in criminality lasts 55 seconds.’

Police officers had to deal with unruly behaviour from both BLM protesters and counter demonstrators that day, he added.

Police set up checkpoints around the area in order to slow down the crowds on their way out, the court heard.

Mr Silcott added: ‘The defendant was stopped and there is a clip of him being stopped.

‘In his interview he gave full admissions of offence, admitted to being at the time and at the place. 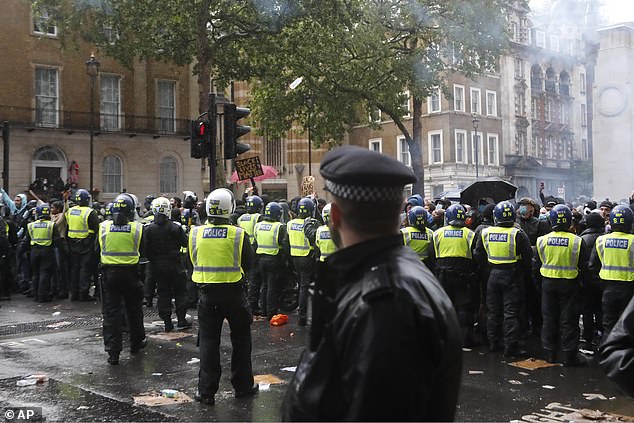 Clips from the day showed the demonstrations turning violent as protestors through items including Boris bikes at the mounted officers. Pictured: Police face demonstrators after scuffles during a Black Lives Matter march in London in June

‘He further went on to state in interview his action did not reflect the person that he is.

‘He went to the protest to raise awareness of racial rights in a peaceful manner.

‘He didn’t think the protest would turn violent, he effectively got swept away.

‘He also said that he wanted to start a job as a teacher and that he regretted what he did.’

Neil Matthews, defending, said: ‘This is a young man who tragically got involved in something without intending to.

‘He set out to go to his first protest ever in his life as a 19-year-old black man who thought he ought to do his bit to support the movement.’

Spencer, who works in a charity supporting young people with mental health difficulties, had never been involved with the police beforehand.

‘His has accepted his culpability for this from the first occasion. 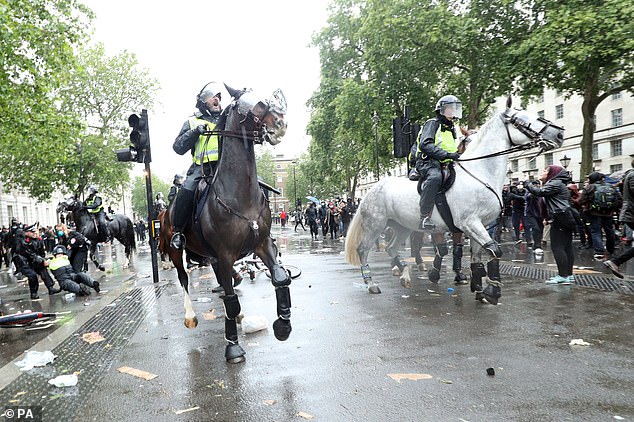 Spencer pleaded guilty to violent disorder and was bailed ahead of his sentencing next month. Pictured: Mounted officers during the Black Lives Matter rally in Parliament Square in June

‘That is an entirely proper thing to do. It may well be that other parties who were much more involved never gave their names and off they went,’ said Mr Matthews.

Judge David Tomlinson interjected: ‘The whole principle of sentencing for violent disorder is the conduct of everyone taken together.

‘It is regrettable that not everyone who behaved in that way is brought to justice.

‘I cannot isolate what little he did, as you submit to me, and what everyone around him is doing around him.’

The judge added: ‘We are proud in the United Kingdom that our police officers are not routinely armed, without in any way commenting on other democracies and jurisdictions making a huge difference in the way we police as a society.

‘Those people, of which your client is one, seem to be lumping the Downing Street police in the same category as police in Minneapolis.’ 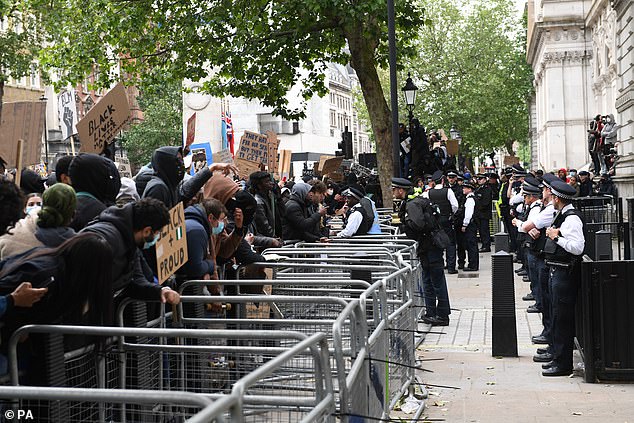 Judge Tomlinson adjourned the case for a pre-sentence report, saying that the outcome of a custodial sentence is ‘unlikely’ to change.

He told Spencer: ‘For the reasons I have already explained, I have to deal with you for the behaviour of everyone and not just your individual contribution.

‘The reason is that in cases of violent disorder every individual ends up saying “I was swept along” leading to this arithmetic impossibility of everyone being swept along without anyone taking responsibility for it.’

He was bailed ahead of sentence at Southwark Crown Court on 28 February.

Tags: 20, charity, facing, Is, worker
You may also like
Celebrities News