The Victorian government proposed using prisoners to pick fruit on farms amid a worker shortage caused by international border restrictions, before the plan was immediately savaged by farmers and canned.

News of the unconventional solution to stop fruit rotting on trees comes as the Victorian Farmers Federation casts doubt on the viability of the Andrews government’s plan to bring 1500 Pacific Island workers into the state via Tasmania. 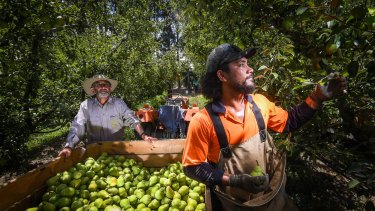 After months of fevered deliberations over how to solve the industry crisis, Agriculture Victoria raised the possibility of using prison labour in a December 23 meeting with horticulture industry groups and the federal government.

The agenda document for the meeting of the Agriculture Industry Reference Group states: “Confidential discussion: Possibility of using community work offenders to support seasonal workforce shortages due to COVID-19.”

Sources who attended the December meeting, who spoke on the condition of anonymity because members of the government taskforce are not authorised to speak publicly about the group’s discussions, said there was “uproar” from growers and the idea was shelved.

“It got shut down very dramatically,” said one source, who said the plan threatened to compound a public perception that farmers paid exploitatively low wages and could not attract sufficient local employees.

“We thought: we’ve actually given you guys 50 solutions but now you’re coming to us with an idea of a chain gang?”

Backpackers and other visa workers, who make up about 80 per cent of the horticulture workforce, have not been able to enter the country due to pandemic travel restrictions, meaning there are not enough pickers as summer crops ripen. The industry estimates it needs 26,000 additional workers to make up for the shortfall.

The federal government offered to fast-track Pacific Island worker visas if Victoria submitted health protocols for models such as on-farm quarantine, which farmers support. But the Andrews government has not allowed fruit pickers to serve their quarantine on-location due to the increased risk created by quarantining thousands more people in the state on top of returned travellers in hotel quarantine.

Some prisoners, who tend to be non-violent offenders, undertake unpaid work to “pay back the community” and improve their rehabilitation and skills, according to Corrections Victoria. 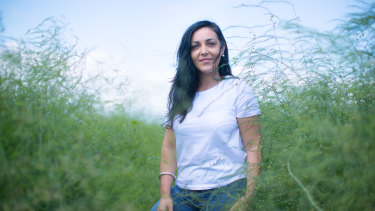 Asked about the plan to use prison workers, VFF president and cauliflower farmer Emma Germano said the proposal proved there was a lack of political desire to achieve a long-term solution to get workers onto farms.

“The government considering such out-of the-box solutions suggests they know full well it isn’t viable these jobs will be filled by willing Australian workers,” she said.

“This is different because it’s targeted at a specific industry to fill a shortage. It’s actually smart but it’s important they’re paid the same as a civilian and not treated as slave labour,” he said.

“Prisoners usually live below the poverty line when they are released… reintegrating them and teaching them how to work with others [while earning money] would help them live a more normal life upon release.”

The state government’s key policy to address the labour shortage is a plan to receive 1500 workers who will serve 14 days’ quarantine in Tasmania. In exchange, Victoria agreed to take an additional 330 Australians who want to return home.

The scheme is due to start at the end of the month, but Ms Germano said the government had not finalised details since it was announced in mid-January. The horticulture industry does not know what proportion of each worker’s quarantine and travel costs will need to be paid for by farmers, meaning it is unclear whether the scheme will be financially viable.

Ms Germano – who said about 20 per cent of crops were going to waste, including stone fruit, grapes and celery – said Victoria’s policy was less beneficial to farmers than Queensland and the NT which have permitted workers to quarantine on farms.

“The Victorian government hasn’t even worked out an agreement with another state government to quarantine our own workers. It’s appalling and shows there’s a lack of political will to make this happen,” she said.

“Until we understand how much it will cost, it’s really a moot announcement and it’s a waste of time working on it.”

A spokeswoman for the Andrews government said the government’s priority was to “secure a pathway for international workers under the Pacific Mobility Schemes and helping businesses attract local workers”.

“We continue to work closely with industry, the Tasmanian and the federal governments to progress applications, organise flights and finalise the details of quarantine for our Pacific Islander Mobility Scheme intake.”