Four skiers diagnosed with coronavirus have been quarantined in a ‘s***hole’ Austrian house with no heating, running water or soap along with six other British holidaymakers who tested all-clear for the killer bug.

The ‘negatives’ have been made to bring food to the ‘positives’ who are confined to a different floor of the house in Piesendorf.

Scientists fear the four confirmed cases contracted a more aggressive strain of the killer bug which a 61-year-old skier caught in Italy before joining the rest of the group in Austria.

The group were given 15 minutes to pack up their belongings last night before an ambulance arrived to take them 30 minutes from a luxury ski resort in Saalbach – where they were being quarantined – to the house in Piesendorf. 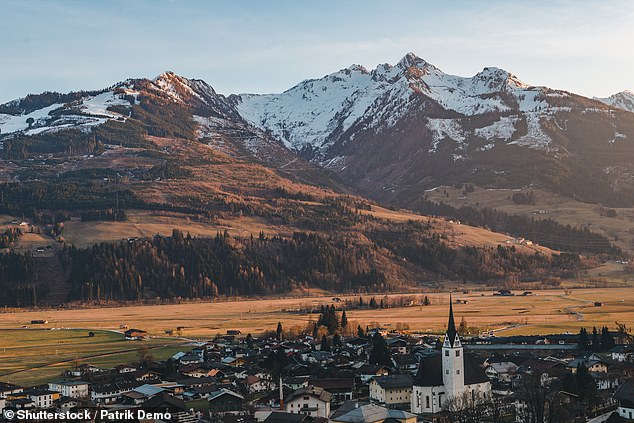 Four skiers diagnosed with coronavirus in Austria have been quarantined in a house in Piesendorf, Austria, (pictured) with no heating, running water or soap along with six other British holidaymakers who have tested all clear for the killer bug 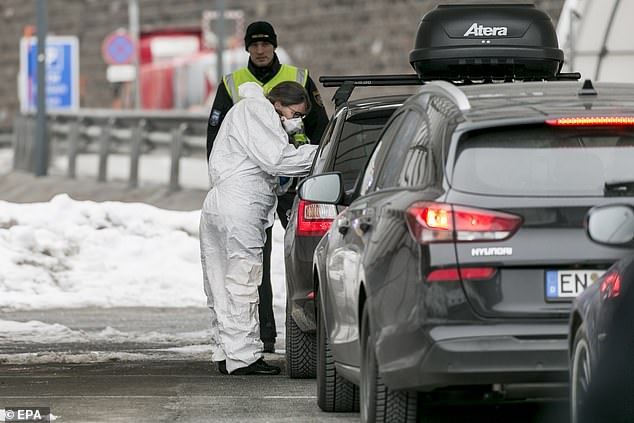 Austria – where the 10 men are being quarantined – shares a border with Italy where 9,000 people have been infected and 463 killed by the bug. Pictured: A doctor in protective gear checks the temperature of a driver at the Austria Italy border

There, they were ushered into a house with no refrigerator to safely store food and were all made to share double beds.

The partner of one of the quarantined men – who asked not to be named – said: ‘The new accommodation is an absolute s***hole.

‘No water, no heating, no refrigerator. The “positives” are on one floor and “negatives” on another.

‘The food is being delivered and left for them. The “negatives” have to take the food up to the “positives”. And they have no soap. There are no bins or tissues.’ 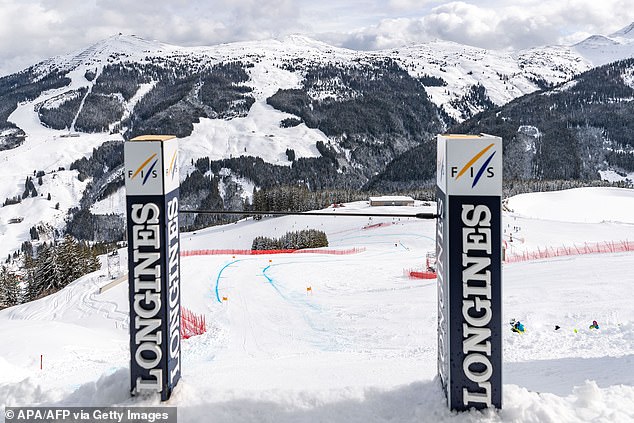 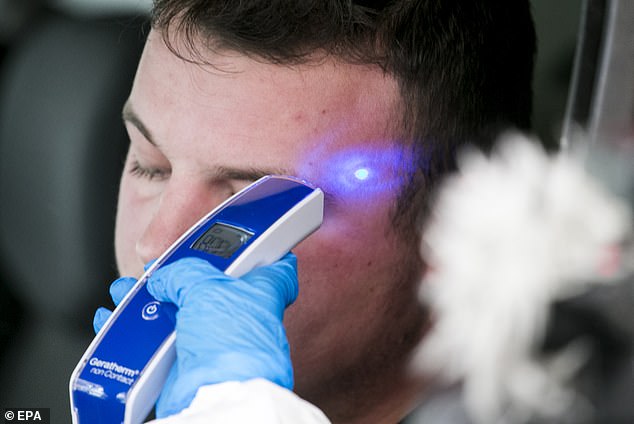 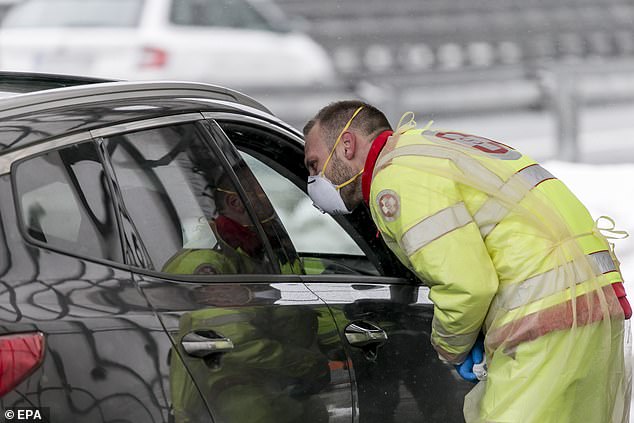 A medic checks the temperature of a car driver who is trying to cross the border from Italy into Austria, which currently has 99 confirmed cases of coronavirus

Saalbach is currently hosting the Alpine Skiing World Cup – a hugely popular event that attracts spectators from around the world.

Austria currently has 99 confirmed cases of coronavirus and shares a border with Italy where 9,000 people have been infected and 463 killed by the bug.

One of the infected, a 61-year-old skiier, was on holiday in Italy before meeting the rest of the group in Austria.

Mr Groake, an IT security manager from Leeds, yesterday said: ‘There is an ambulance outside. We originally said no to being moved.

‘We are moving to a house with double rooms. The positive and negative people will be split into in different bedrooms but we don’t know who’s got it or not.

‘I don’t want to share with someone just to find out they have [coronavirus].

Dr Richard Greil, who was in charge of the skiers while they were in hospital, said that all the cases seen in the region were coming from Italy, which he described as being ‘completely out of control.’

It is widely speculated that Italy has a stronger variant of the virus – known as the ‘L’ variant – but there is no concrete evidence for this. 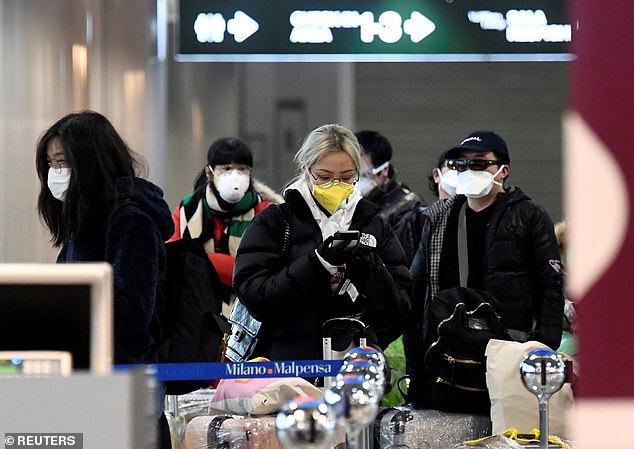 Passengers wearing protective face masks are seen in Malpensa airport near Milan, Italy. It is widely speculated that Italy has a stronger variant of the virus – known as the ‘L’ variant – but there is no concrete evidence for this

Scientists believe that the S-type was probably the original strain that moved from animals to humans and the second strain emerged shortly after that, with both versions now spreading.

The more aggressive appears to be the L-type which it is speculated is the type now prevalent in Italy.

Ravinder Kanda at Oxford Brookes University said: ‘There do appear to be two different strains.’

She added: ‘[The L-type] might be more aggressive in transmitting itself, but we have no idea yet how these underlying genetic changes will relate to disease severity.’

And Erik Volz at Imperial College London said: ‘I think it’s a fact that there are two strains. It’s normal for viruses to undergo evolution when they are transmitted to a new host.’

In Austria, news of the infected British group led to hasty attempts to stop panic and cancellations.

Local officials even originally said they were trying to get a charter flight to remove the rest of the British group, but they later backpedalled and said this was a misunderstanding. 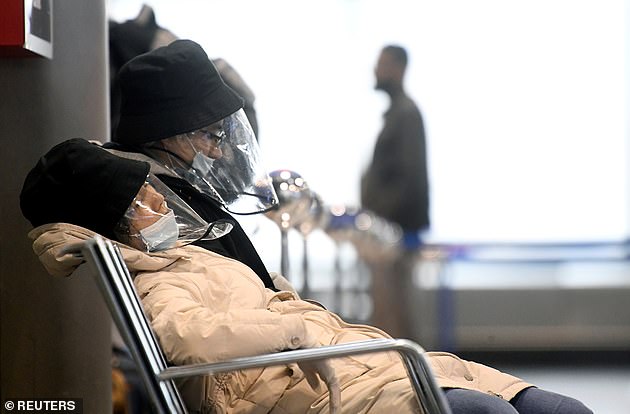 Passengers in Malpensa airport, near Milan, wait for their flight from the quarantined region of northern Italy yesterday 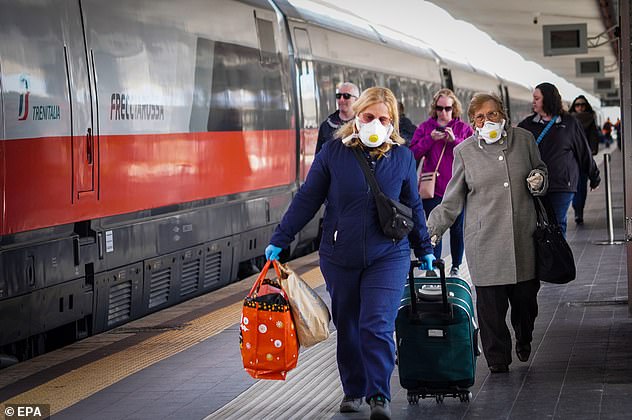 Dr Richard Greil, who is head of the department at the Salzburg Landeskliniken hospital dealing with quarantined patients earlier said: ‘The first British man who was hospitalised, a 61-year-old, is the more seriously ill of the three but he is definitely not acute.

‘The two other British men, aged 44 and 49, have only the very mildest of symptoms even though they are technically also infected. Under normal circumstances it would not be even necessary to move him to the hospital but in order to avoid a panic they have been taken to our facility.

‘As you can imagine the other guests and staff would not be happy about having infected people there.’

He stressed, however, that under normal circumstances, even though they tested positive, the lack of any significant symptoms would mean that house quarantine would normally have been satisfactory.

He said the hospital had special filtration systems to provide air and the highest security standards to prevent the infection from spreading.

The seven other people in the group are being kept together in the same hotel, reports suggest.

An official said they had decided it was not necessary to quarantine the other 35 hotel guests or the staff and hotel owner who had all tested negative for the disease.

They said this was because the group kept to themselves and ate in a separate room.

They said that the sick man had stayed in his own room which had not been cleaned while he was there, also meaning that cleaning staff were not in contact with him. 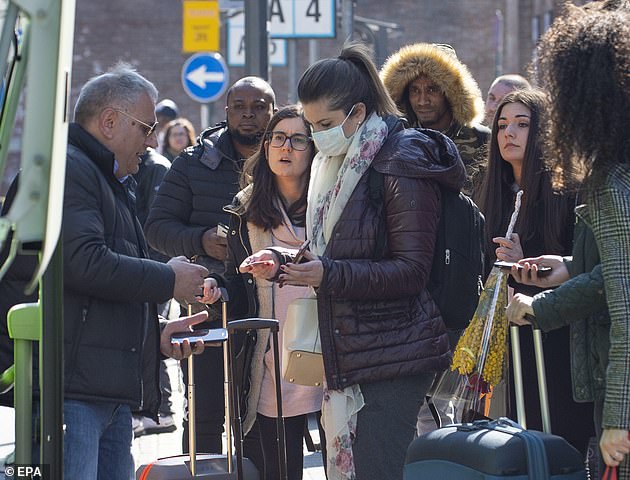 The more aggressive variant of coronavirus appears to be the L-type which it is speculated is the type now prevalent in Italy. Pictured: Mass panic swept in after the Italian government imposed a quarantine affecting 16 million people in the country’s northern region yesterday

Austrian officials said earlier that they had been trying to work out a way to fly the British group back home but that it was difficult because most airlines were not prepared to take them – even though they at the time showed no signs of the disease.

As the UK is not arranging special flights to remove infected tourists, the alternative would mean they had to wait the two-week quarantine period, which Austrian officials want to avoid in the heart of the tourist season.

The second option they said they were considering was to set up a quarantine area for suspected infected holidaymakers.

However, a statement by local council leader Bernhard Gratz said they were trying to arrange a charter flight to remove them from the tourist area or set up a quarantine zone.

This was later rejected by Salzburg regional spokesman Franz Wieser, who said there would be no charter flights organised to remove sick people from the region.

And there would also be no specialist quarantine circles set up.

The mayor of Saalbach-Hinterglemm, Alois Hasenauer, said they were keen to make sure there was ‘no hysteria and no panic’.

He also said that there had been some cancellations since news of the infection at the resort was made public, but not many.

Meanwhile, the virus is spreading in Salzburg, according to officials, with victims including a German tourist from the Frankfurt area aged 37.

He tested positive while visiting relatives in St Gilgen.

He has now been quarantined together with his family and one other person who was in contact with them, with a total of seven now in isolation.

The mayor of St Gilgen, Otto Kloiber, said that the German had only recently arrived and had not had contact with anyone else in the village.

Saalbach-Hinterglemm is one of our top ski resorts in the Austrian Alps, which has been consistently expanded and modernised and now has 167 miles of slopes and more than 70 lifts.

It lies in the Glemmtal valley which is also where the hotel is that the British group is quarantined in, which is about 53 miles from Salzburg.

Tags: Britons, Coronavirus, quara, with
You may also like
Celebrities News