British and American tourists are among hundreds of people stranded in Panama today after a ‘tribal’ festival ended with as many as 500 people being quarantined.

Panama’s government announced that visitors could not leave the country unless they could prove they had been there for at least 14 days.

That leaves hundreds of foreigners who went to the Tribal Gathering on the Caribbean beach of Playa Chiquita unable to leave the country, which now has 109 coronavirus cases.

James Baker, an organiser from Manchester, said the group had enough tents, food and medical support to last around a month if necessary. 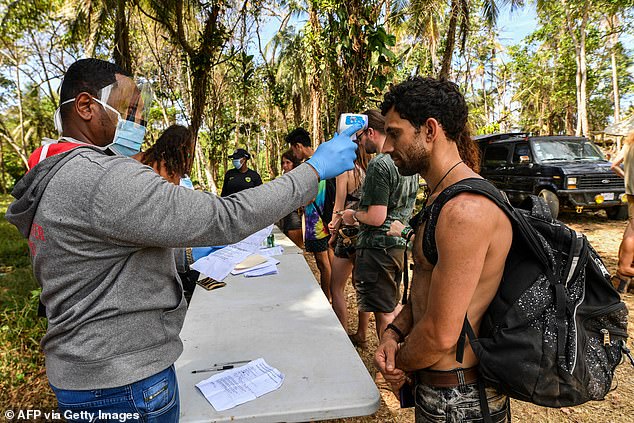 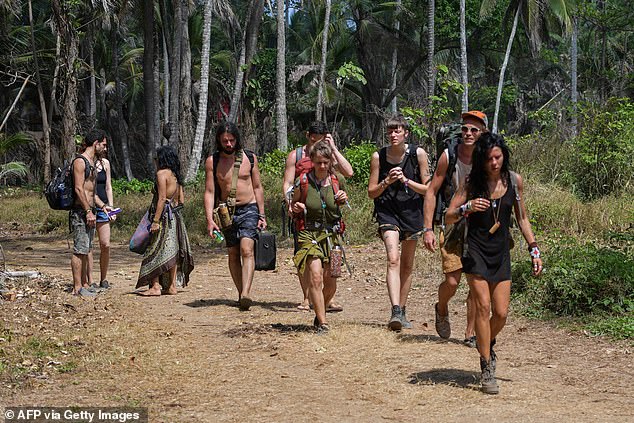 Tribal Gathering attendees leave the venue in Cuango yesterday, with some guests allowed to leave because they had been in Panama for at least 14 days 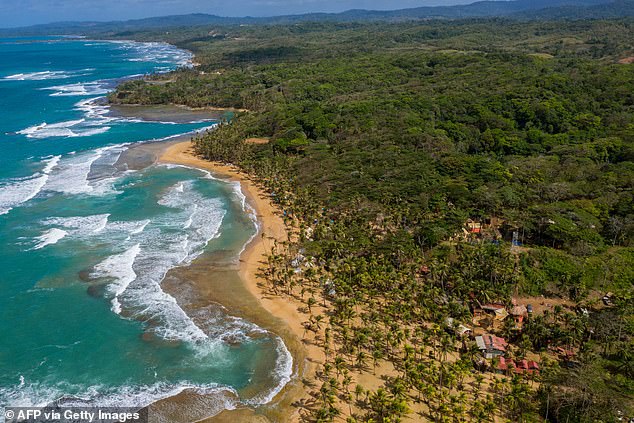 An aerial view of the Caribbean beach where the Tribal Gathering has been taking place, with some people now bracing for a longer stay

Around 2,300 people had been to the Tribal Gathering, which ran from February 29 to March 15 – longer than 14 days, meaning many have been able to leave.

But the remaining festival-goers may face difficulties getting home because of flight and transport cancellations related to the outbreak.

Mr Baker said two people who had fevers at the festival tested negative for coronavirus.

He said those attending the Tribal Gathering included people from Spain, Canada, the United States, Denmark, France, Britain and Hungary as well as Costa Rica, Colombia, Chile and Mexico.

‘The mood is generally good, a lot of people do obviously want to go home, so again, it’s about getting the help from the authorities so they can be taken back home as quickly and safely as possible,’ he said.

‘What we’re telling people to do is get in touch with their embassies to get their help, like we say, we need and request the help of all authorities and embassies,’ he said. 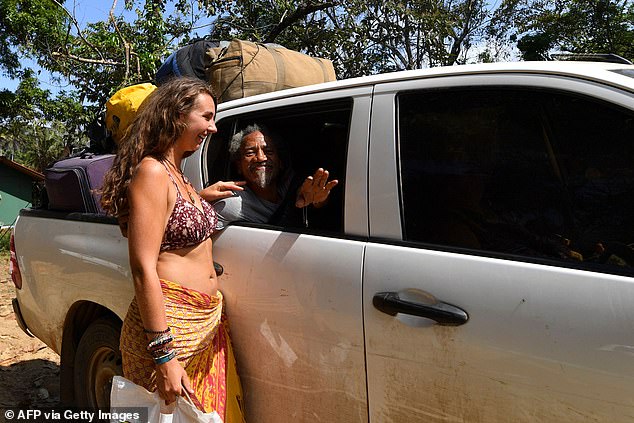 A woman speaks to a ban leaving the festival venue in the back of a car in Panama yesterday, with supplies loaded on the back of the vehicle 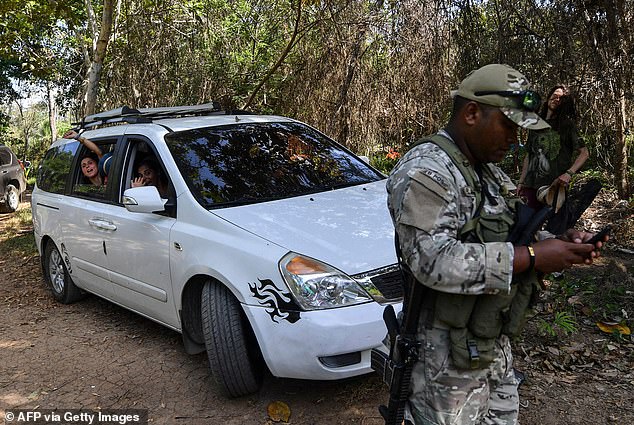 A Tribal Gathering attendee gestures from the rear window of a car as it leaves the venue, with a Panamanian soldier at the scene 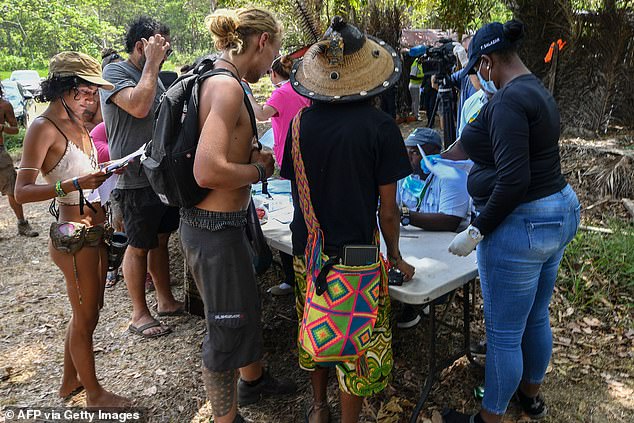 Panama’s health workers check attendees of the Tribal Gathering in Cuango, who say they have supplies to last a month if necessary

The UK Foreign Office says it ‘strongly encourages’ British visitors in Panama to ‘consider leaving’ in case all transport back to the UK is cut off.

‘Non-resident British nationals in Panama who wish to leave should contact their airline or tour operator,’ the UK government advice says.

Britons could face similar difficulties in Spain, where the government has ordered hotels to shut from next Tuesday onwards.

The FCO is advising British tourists to get out of Spain as soon as possible before they are ejected from their hotels.

Other British tourists are facing a similar struggle to get home from countries including Morocco and Cyprus.

Holidaymakers struggling to return home have accused airlines of leaving them stranded and demanding extortionate fees.

Tom Widdall, who is in Morocco with his heavily pregnant girlfriend, was due to fly home from Agadir to Manchester on Saturday, but his easyJet flight was cancelled. 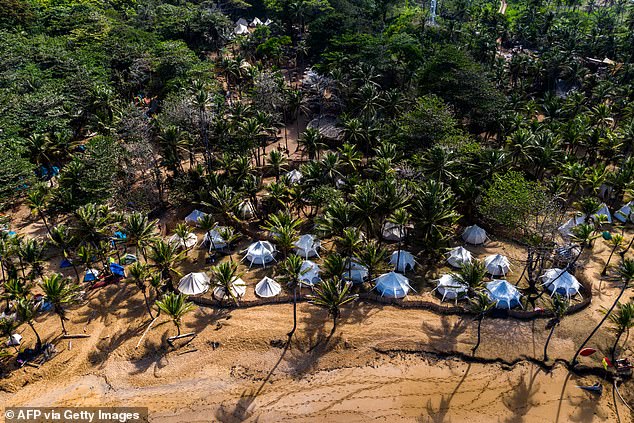 Part of the venue in Panama, which has also introduced a night-time curfew to cope with the virus outbreak 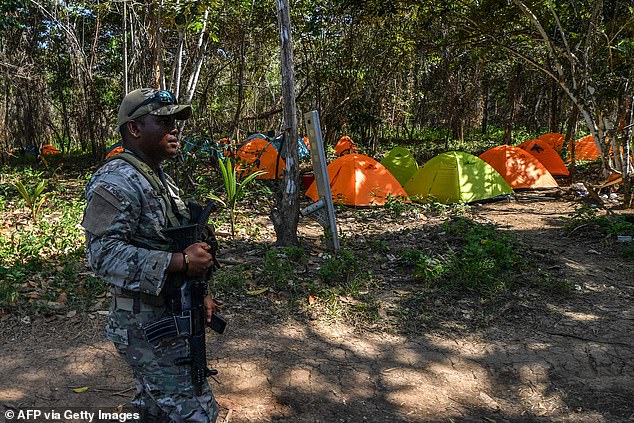 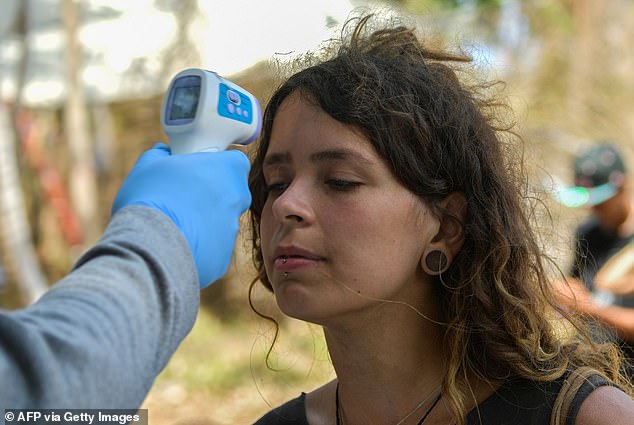 A woman has her temperature checked at the festival in Panama, which announced last night that it now has 109 virus cases 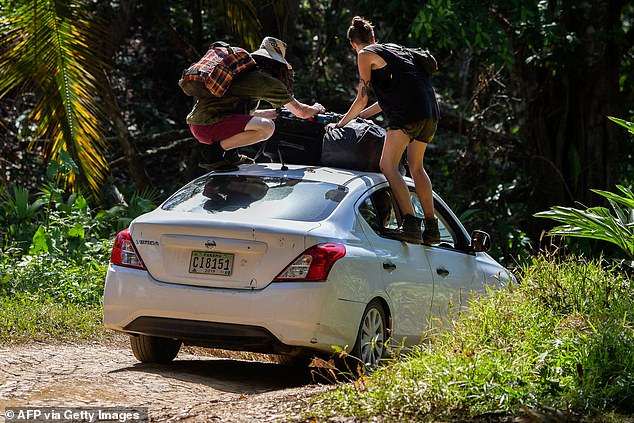 EasyJet told passengers it is ‘doing all we can to assist’.

Panama’s 14-day rule stops people who had recently been to high-risk countries from spreading the virus elsewhere.

At the same time, Panama’s government announced that the number of coronavirus cases in the country had risen to 109.

In addition, a 9pm-5am curfew is being imposed from Wednesday night, president Laurentino Cortizo announced.

Workers in essential areas such as hospitals and pharmacies are excepted from the curfew.

Police and firefighting, supermarkets and restaurant delivery, agriculture and food production, hotels and banks, media and telecommunications, and shipping and public transportation are also exempted.

Tags: Americans, amon, and, Are, Britons
You may also like
Celebrities News