‘You didn’t have to watch your father’s funeral through an iPhone’: British Bloomberg journalist blasts Pete Buttigieg over travel restrictions that stops foreigners living in the US visiting family but allows Americans to go to Europe freely

Transport Secretary Pete Buttigieg was grilled on Thursday by a British journalist who demanded to know why travel restrictions ‘with no scientific rationale’ were being enforced, and said it had forced him two days ago to attend his father’s funeral via Zoom.

Jonathan Ferro, co-anchor of Bloomberg Surveillance on Bloomberg Television, took Buttigieg to task over the policy, which he said was illogical.

Since March 2020, the US border has been closed to 26 European countries, the UK, Ireland, Iran, China and South Africa because of COVID fears. They were the countries with the worst outbreaks at the start of the pandemic. India, which is experiencing a terrifying COVID outburst – is now also on the list and so is Brazil.

People from any other country can fly to the US, so long as they have a valid visa and a negative COVID-19 test, and Americans can also enter the US from anywhere in the world so long as they also test negative.

Holders of certain work visas, including H1B or L1 visas, however – highly-educated professionals in the case of H1B visas, and executives who are transferred through their multinational companies on L1 visas – cannot fly directly from certain countries to the US. They must quarantine for two weeks in a third country, frequently Mexico.

‘I have spoken to scientists about this, and there is no scientific rationale for that policy,’ said Ferro. 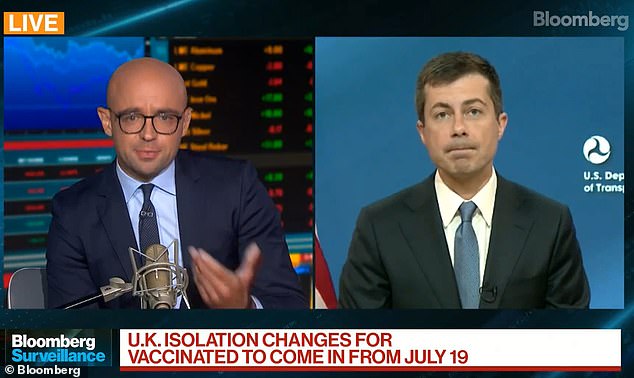 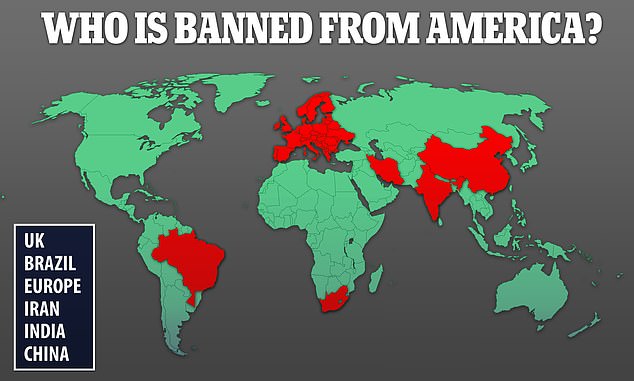 People from any other country can fly to the US, so long as they have a valid visa and a negative COVID-19 test, and Americans can also enter the US from anywhere in the world so long as they also test negative. That includes traveling from countries like some in Africa, where the vaccine roll-out is barely off the ground, and Nepal, where a frightening new variant has been detected

‘Why are you not changing the policy when we have scientists day after day say there is no scientific rationale for maintaining it?’

Since March 2020, travel between the UK and America has been mostly banned.

Americans can go to the UK now but they must quarantine for 10 days on arrival and take multiple negative COVID tests – for more than $200 – even if they’re vaccinated.

British people cannot come into the US, unless they have special circumstances that exempts them from the ban.

The ongoing ban has been slammed as ‘stuck in time’ and ‘outdated’ when considering the fact that both countries have now vaccinated more than 41 per cent of their populations.

Buttigieg, who ran for the Democratic nomination before supporting Biden, tried to argue that it was ‘complex’, and said they needed to be cautious.

Americans can currently travel freely to Europe and back, but Europeans cannot enter the U.S. unless they have a green card.

‘As transportation secretary, I am as impatient as anybody to see us move as quickly as we responsibly can toward more forms of reopening,’ Buttigieg said.

‘Right now what is going on is a set of working group processes.

‘So we have convened working groups with our international partners – one for the UK, one for the EU, one for Canada, one for Mexico – to determine the right pathway forwards.

‘A lot of this is based on what is going on with progress on the vaccines.

‘Obviously we see good news and bad news out there in terms of the variants – one moment you’re reading about a variant happening across world; the next you know, it’s becoming the dominant variant in the US.’

‘You didn’t have to watch your father’s funeral down the screen of an iPhone on Tuesday,’ he told Buttigieg. ‘I did. Because of your policies.

‘I expected you to bring up the science and I expected the quote that came from you to be used – because you used it a month ago, two months ago.’

Buttigieg replied: ‘I am among those who are impatient to see loved ones who live across the Atlantic.

‘The U.S. is going to be conservative in dealing with a phenomenon that has led to the deaths of 600,000 Americans.’

But Ferro insisted that the policy did not make sense.

‘Regardless of anything you say for the next couple of minutes it’s not going to justify it,’ he told the 39-year-old.

‘What I need to understand from you as a policy maker is why thousands of people who live in this country legally, and pay taxes, cannot go home to see loved ones and return directly.

‘And why you still repeat the same line again and again and again. It doesn’t make it true. You do not have a scientific rationale for this. You cannot back it up with science, sir.

‘Why are you not going away with policy makers and doing something?’

In May, the CEOs of 22 major airlines begged Joe Biden to give them a timeline that would allow them to reopen in July.

They said there are multiple things to be considered like staffing airline routes, checking that fleets of planes which haven’t been used for months are still safe, replacing thousands of rental cars that have been sold, and bringing back hotel staff.

But their pleas were ignored from the White House, which is yet to offer a tentative end date for the ban.

Buttigieg said the Biden administration was dealing with ‘imperfect tools,’ explaining that they were working on a country-by-country basis, rather than looking at the risk to individuals.

‘We are dealing with a country-based framework for assessing risk,’ he said.

‘When, in a perfect world, we would know all the information we needed to have for a traveler-based framework.’

‘With the stroke of a pen you could enable thousands of people in this country who work here legally and pay taxes to return home to loved ones,’ Ferro concluded.

‘And you can do that by making an equal treatment for people with an H1B, an L1, a green card, that are resident of this country.

‘That’s not difficult. That’s not easy. You didn’t have to watch your mum stand by your father’s casket at a funeral two days ago because you won’t do what I’m describing. It’s easy.

‘I hope you go away and make the changes so that thousands of people don’t have to go through what I did.’

Tags: b, Bloomberg, British, journalist
You may also like
Celebrities News