Rome: The mysterious death of a brilliant young Italian doctor has taken a dark new twist with claims that he was murdered by the Sicilian mafia.

Attilio Manca, 34, was found dead at his home in Viterbo, central Italy, in 2004, supposedly of a heroin overdose.

Monica Mileti, his friend, was convicted of administering the dose and jailed for five years. But this week an appeals court in Rome acquitted her of any involvement in the urologist’s death. Suspicions have turned instead to Cosa Nostra, Sicily’s mafia network. 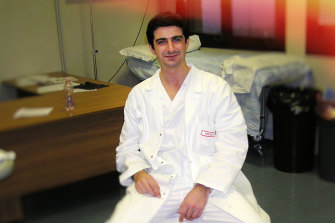 Attilio Manca, 34, was found dead at his home in 2004. He had previously treated a mafioso boss in hinding.Credit:Antimafiaduemila.com

Fabio Repici, a lawyer representing the victim’s parents, said they had always suspected their son was murdered.

Several pentiti – mafia informers – claimed Dr Manca, originally from Sicily, had been compelled to travel to Marseille months before his death to treat Bernardo Provenzano, a notorious Cosa Nostra chief, who was in hiding and suffering from prostate cancer.

“Bernie the Tractor” – so called for his propensity to mow down rivals, evaded capture for a record 43 years before his arrest in 2006. He died in 2016 in a prison hospital, aged 83. Five informers reportedly told judicial authorities the doctor was murdered to keep secret Provenzano’s whereabouts.

There were inconsistencies in the overdose theory – Dr Manca was left-handed, yet needle marks were found in his left arm. Nor were there any fingerprints found on the syringes that delivered the fatal overdose.

Giulia Sarti, an Italian MP on the parliamentary justice commission, which scrutinised the case, said: “The whole overdose theory is false and has now collapsed. Attilio Manca was never drugged or committed suicide; he was a victim of the mafia.”

Angela Manca, the victim’s mother, told Corriere della Sera newspaper: “We want truth and justice. We can’t allow the memory of my son to be besmirched in such a horrible way.”

Provenzano was born in Corleone, the Sicilian town synonymous with Cosa Nostra which gave its name to the fictional family in the Godfather films.

While on the run, he avoided communicating by phone, sending out “pizzini” – tiny handwritten notes to his lieutenants and collaborators.