Georgia Frances-King never imagined she’d savour the early-morning screeching of suburban cockatoos. Yet here she is, on a sunrise-facing balcony, and the clamour in Melbourne’s “big sky” sounds like soothing proof of home.

The literary agent and editor has been bouncing around with friends and family since coming home in November after three years in New York City. 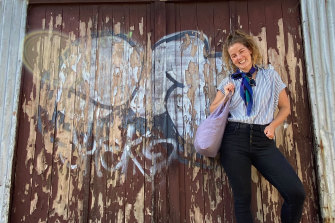 Georgia Frances-King is a literary agent and editor recently returned to Melbourne from New York.

She endured the first wave of COVID-19 that overwhelmed the city’s hospitals, infected neighbours and killed parents of her American friends.

British friends went back to Britain, French friends to France and “when the numbers started ticking up again, I thought, ‘I think I’m going to sit the second wave out’,” she says. 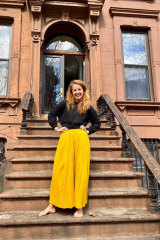 Georgia Frances-King on the steps of her Brooklyn apartment block. She’s now back home in Melbourne.

“It wasn’t a forced decision, but it was an easy decision.”

She is one of more than 480,000 Australians who have returned since the beginning of the COVID-19 pandemic – close to half the total number of Australians previously living abroad, according to estimates by Advance.org, a professional network for expats.

Many are now unexpectedly rediscovering – and relearning – their own evolving nation.

“Some of the Melbournisms like people planning a fair way ahead and even booking restaurants and things like that are all very different to Hong Kong,” says financial technology executive David Jenkins, who returned with his family in mid-2020 after 16 years in Asia.

“But I’d say probably the funniest thing is just communication. When you live in a place where English is the second or third language, you tend to be very efficient in the way that you speak. But when you come home to Australia, that actually sounds quite rude.

“I was in a [Melbourne] taxi and I just said, ‘turn left’. Normally, I would ask, ‘can you please take the next left?’ In Hong Kong, honestly, that would confuse a lot of people.” 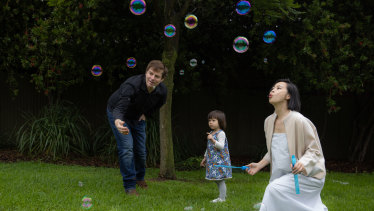 David Jenkins with wife Fay and their daughter Amelia in a Richmond park. Credit:Simon Schluter

Mr Jenkins is among the 16 per cent of returned Australians now working remotely for their overseas employer, according to an Advance.org survey.

His wife, Fay, an architect, is among the 15 per cent planning to build their own business.

They returned because of the mounting civil unrest between pro-China and pro-democracy forces in Hong Kong rather than COVID-19. Melbourne, they decided, offered a more stable childhood for their three-year-old daughter, Amelia.

“Also the natural environment: The parks, the fact that she can run around and chase insects and things. She loves that,” Mr Jenkins says. “Every time I see her doing that, I think ‘we made the right decision’.”

They are in the 37 per cent who plan to stay in Australia permanently. 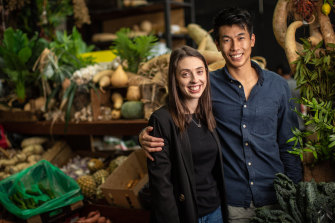 Jess Welk and Andrew Jiang have moved home to Melbourne permanently because of the COVID-19 crisis in the United Kingdom.Credit:Scott McNaughton

Mr Jiang’s secondment by his Australian firm was secure, but spiralling COVID-19 cases in the United Kingdom closed Ms Welk’s chances of ongoing contracts in her specialisation of property law.

“She was putting her feelers out in Australia for jobs and the feedback she was getting was a lot more positive than in London,” Mr Jiang says.

“This was about mid-December. At that time, we thought ‘it’s time to move back to Australia’.”

Ms Welk is among the 36 per cent of returned Australians who, according to the Advance.org survey, are working in a new job.

Ms Frances-King has shared many beers and coffees comparing COVID-19 experiences with Melbourne friends. It was a tougher lockdown here, she says. New York City never enforced a curfew or five-kilometre travel limit.

“But over there, [COVID-19] is very immediate and very much around you,” she says.

“That’s a big difference being back. You realise the mental struggle that a lot of Melburnians were having [in lockdown] versus, maybe, the more health-focused struggle in America.

“I’m very grateful to be home. I speak to friends in New York: ‘Guys, I actually saw a movie in a movie theatre the day. I send them photos of a bar I’m at. Australia really worked together to make this work.”

Tags: Australian, brain, gain:, half, of
You may also like
Celebrities News