Washington: Brad Hassig was swimming with his 10-year-old twin sons and their 11-year-old neighbour on a Tuesday afternoon when he suddenly started to drown.

Hassig, 46, was doing underwater breathing exercises in his family’s backyard pool in Mountain Brook, Alabama, while the kids played. He would go underwater and hold his breath for about a minute at a time before resurfacing, as a calming technique. 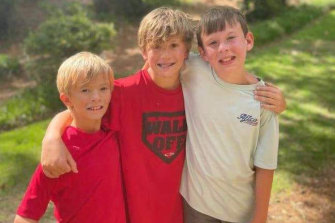 “It’s relaxing. I love doing breathing exercises,” said Hassig, adding that it’s a ritual he does often, and he has never had problems in the past. “I just like the peace of being underwater.”

This time, though, he didn’t re-emerge. One and a half metres below the surface, Hassig – who was the only adult home at the time – lost consciousness at about 4pm on June 14. It’s unclear how long he was submerged for, but the boys noticed soon enough. His son Christian put on his goggles and saw that his father was slumped over on his side, lying lifeless at the bottom of the pool.

“I could see his face was starting to turn blue,” said Christian. “It was very scary.”

“Daddy’s not okay,” he remembered yelling, between tears. From that point on, “we were just focusing on saving our dad’s life.”

He and his twin brother, Bridon, and their neighbour, Sam Ebert, collectively pulled Hassig – who weighs about 85 kilograms – up by his shoulders and brought him over to the pool steps. Their father’s phone was locked, and none of the boys had phones of their own, so Christian sprinted to the street to find help. 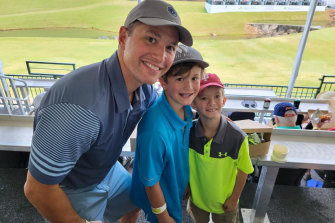 Simultaneously, Bridon started performing cardiopulmonary resuscitation on his father. Despite never having done it before, Bridon had recently seen the technique in two movies: Hook and The Sandlot – both of which feature CPR scenes. He and his brother have watched the films several times.

Although he was “overwhelmed and panicked” in the moment, Bridon said, the movies quickly came to his mind. He decided to try what he had seen on the screen, starting by leaning his dad’s head back, then doing chest compressions and mouth-to-mouth to the best of his ability.

“I just knew I need to do this,” he said, adding that shortly after he began doing mouth-to-mouth, Hassig woke up, and instantly coughed up foam, blood and water.

“It was probably the most emotional time of my life,” Bridon said.

Minutes later, paramedics arrived, as Christian had flagged down a driver on the street and called emergency services. A neighbour who is a cardiologist heard the sirens, and raced over. He helped check Hassig’s pulse and move him from the pool steps to the deck.

As Hassig’s eyes opened after the distressing event, “it was just chaos,” he said, adding that his wife was at work. “There were people everywhere.”

He went by ambulance to Grandview Medical Center in Birmingham, Alabama, where doctors diagnosed him with hypoxia (low oxygen levels in the body’s tissues), pulmonary edema (a buildup of fluid in the lungs) and shortness of breath.

His ailments were caused by the extended time period Hassig spent without oxygen, and he is expected to make a full recovery, he said. The incident was not triggered by an underlying condition, Hassig said. Doctors told him it was a result of his heart rate and blood pressure dropping rapidly underwater. After being monitored in the cardiovascular intensive care unit for 24 hours, Hassig was released to continue his recovery at home.

Although the circumstances were vastly different, Hassig’s experience was similar to Olympic swimmer Anita Alvarez’s recent mid-routine crisis, when she fainted and her coach dove in to save her. The incident happened just over a week after Hassig was rescued by his sons.

“I saw that, and thinking of her experience, it made me cry, but it also made me grateful,” said Hassig, a chiropractor, adding that he was relieved Alvarez also survived.

Hassig is still recovering mentally and physically from the traumatic ordeal, he said, explaining that he felt terrible for what he put his sons and their friend through.

After he got home from the hospital, he worried they might not want to swim again.

While Hassig said he will no longer be doing underwater breathing exercises, he decided to hop back in the pool only about a week after he nearly drowned in it.

“I’ve got to do this. I’ve got to show my boys that you’re brave, you face your fears, and you go on,” he said. As soon as he dunked his head, the kids felt comfortable swimming again, he said. “I’m glad I did that.”

In addition to the boys’ brave rescue that day, Hassig has also been heartened by the overwhelming support he has received from others.

“It’s humbling that your kids saved your life, but then you see friends, neighbours and the community. People brought meals and prayers and get-well cards,” he said. “To see that people care, that’s been amazing.”

Given that the summer pool season is in full swing, Hassig is in the process of arranging a community-wide CPR training course for adults and children. His goal now, he said, is to “potentially be able to save another life” through raising awareness.

The boys are more eager than ever to learn more about swim safety – and share their story with others. Had the two films with CPR scenes not been fresh in Bridon’s mind, his dad might not have made it.

“It’s really important, because you never know if that could happen to you,” Christian said. “It helps to know what to do.”