Boris Johnson attempted to sooth the holiday fears of up to five million Britons today over fears their Covid jabs could see them barred from Europe.

The European Medicines Agency (EMA) does not recognise a version of the vaccine produced by Covishield at the Serum Institute of India (SII), even though it is just as effective as AstraZeneca doses made elsewhere.

Holidaymakers given this vaccine could therefore be refused entry at EU border crossings when batch numbers are checked on digital Covid passports.

However Downing Street this morning hit out at the potential for a ban, saying the vaccine is identical wherever it is made.

And Boris Johnson used a press conference with German leader Angela Merkel to try to assuage fears as well.

‘I see no reason at all why the MHRA-approved vaccines should not be recognised as part of the vaccine passports, and I am very confident that that will not prove to be a problem,’ he said from Chequers.

The EU Digital Covid Certificate allows those who are fully vaccinated to move through Europe without having to quarantine or undergo further testing.

But it only recognises vaccines currently approved by the EMA: Pfizer-BioNTech, Moderna, Johnson & Johnson, and the Oxford-AstraZeneca vaccine made in Europe.

Britons will be able to determine whether they had the SII jab by looking at their batch number, which appears on vaccination record cards. 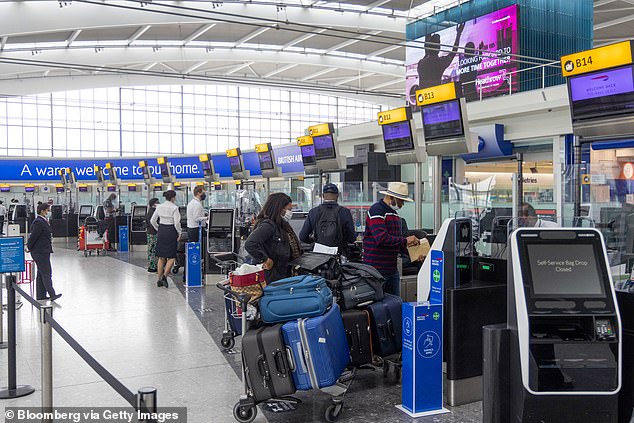 Up to five million British holidaymakers could potentially be banned from Europe because they were given Indian-made versions of the AstraZeneca Covid jab. Pictured: Stock image

The European Medicines Agency (EMA) does not recognise a version of the vaccine produced by Covishield at the Serum Institute of India (SII), even though it is no less effective than jabs made elsewhere. Pictured: Stock image 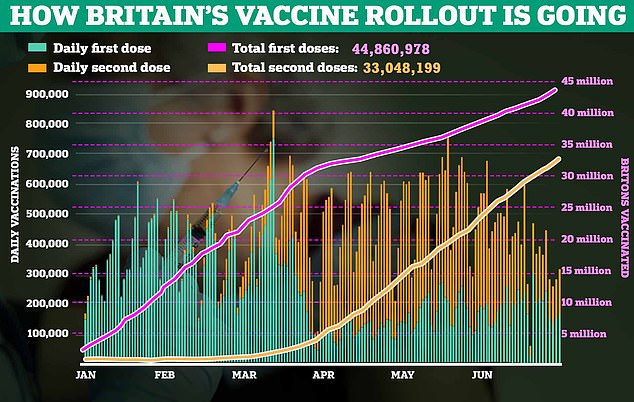 HOW YOU CAN FIND OUT IF YOU WILL BE AFFECTED

Every AZ vaccine administered in the UK will appear under the same name – Vaxzevria – in medical records and on the NHS app.

The only way you can find out if your jab was in India is by checking the batch number.

This appears on the vaccination record card you will have received when you got your jab.

For those who did not hold on to their card, they can find the batch number on their NHS Covid pass letter, which can be downloaded online.

The letter is used for travelling abroad or going to mass events in future, which may require proof of vaccination.

You can get your pass letter if you’ve had two doses of the vaccine in England.

To apply for a physical pass letter you can visit the NHS website by clicking here.

Or you can download a digital version on the NHS App or the online Covid Pass service.

UK Government experts said there is nothing to suggest the AZ doses made at the Serum Institute are any less effective than UK batches.

Professor Adam Finn, who advises No10 on Covid vaccines, said the EU issue was simply an ‘administrative hurdle’.

Both versions of the AZ vaccine have been shown to be 94 per cent effective at stopping Covid deaths and up to 92 per cent at reducing hospitalisations, even from the Indian variant.

However, the issue of British exclusion from the Continent is still largely theoretical because there are so few EU destinations on the ‘green’ travel list.

The EMA has not approved the Covishield jab only because its Indian manufacturers have not yet sought a licence for the vaccine in Europe, reports say.

There is no evidence the vaccine is any less effective than the Vaxzevria AstraZeneca jab, which is produced in the UK and Europe.

Despite the EMA refusing to accept the SII jab, nine European countries have reportedly told India they will accept travellers inoculated with Covishield.

According to sources at the Indian Foreign Ministry, Austria, Germany, Slovenia, Greece, Iceland, Ireland, Spain and Switzerland have disregarded the EMA’s dismissal.

Insiders added that Estonia has confirmed it will recognise all vaccines authorities by the Indian government.

Minister Subrahmanyan Jaishankar said he raised the issue of authorisation of the Covishield vaccine during a meeting with EU representatives in Italy this week.

Another insider said India has told the EU that it would lift quarantine for anyone carrying the EU Digital Covid Certificate if Indians were allowed equal access.

‘We have also conveyed to EU Member States that India will institute a reciprocal policy for recognition of the EU Digital Covid Certificate,’ the source said.

Friction has emerged elsewhere over the issue, with Covid vaccine facility Covax urging leaders to consider all people inoculated with products approved by WHO equally.

The Covishield jab was widely provided to people who live in Africa, and Covax says the EMA’s decision to not authorise it discriminates against low-income countries.

‘Any measure that only allows people protected by a subset of WHO-approved vaccines to benefit from the re-opening of travel into and with that region would effectively create a two-tier system,’ a statement said.

That would widen ‘the global vaccine divide’ and exacerbate ‘inequities we have already seen in the distribution of Covid-19 vaccines,’ it added.

A spokesperson for the European Commission said entry into the EU should be allowed to people ‘fully vaccinated with one of the vaccines authorised in the EU.’

The Department for Health has refused to say exactly how many doses of the Indian-made jab have been administered in the UK, but five million were imported in 2021.

A statement said: ‘As we continue to cautiously reopen international travel, NHS Covid Pass will be a key service that allows people to demonstrate their Covid-19 vaccination status.’

It added that all AstraZeneca doses used in the UK will appear under the European name –  Vaxzevria – on the NHS app, even if they were made in India.

They can, therefore, only be identified by the batch number.

Tags: £5m, Boris, confident
You may also like
Celebrities News