‘We didn’t win but it’s still the best day of my life!’: Emotional Mike Bloomberg vows to carry on his fight against Donald Trump even after ending his his $1 billion campaign following its Super Tuesday collapse

Billionaire Michael Bloomberg delivered an emotional farewell to his presidential campaign Wednesday – even as he vowed to deploy his mammoth operation to keep hammering President Donald Trump.

‘Today I’m sorry we didn’t win but it’s still the best day of my life and tomorrow’s going to be even better,’ Bloomberg told cheering staff members at his Manhattan headquarters.

His voice cracked at times as he recounted the efforts by his staff, who enjoyed pay and perks as they helped lift him up in the polls only to have former Vice President Joe Biden reemerge as the dominant Democratic candidate. 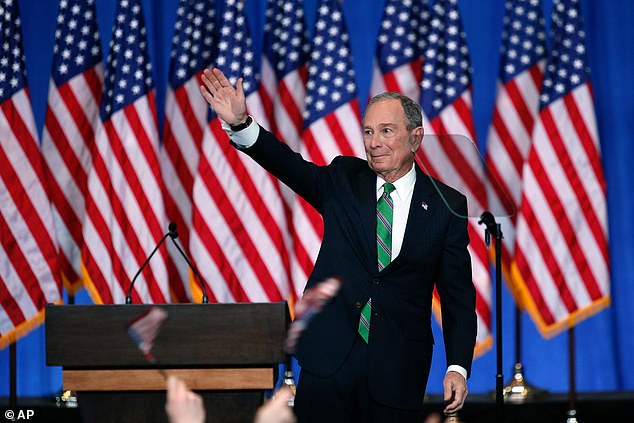 ‘You devoted your days and nights doing the most important job in America – defeating Donald Trump,’ he told them.

‘No campaign has ever achieved as much as you did in such a short period of time,’ he told them, saying they got 2 million votes after knocking on millions of doors.

His eyes moistened at the end of his remarks as he said he was ‘amazed at how many people have stood with me shoulder to shoulder.’ He endured a flurry of attacks late in his bid, both for being a billionaire rivals said was trying to ‘buy’ the election, and faced accusations of overseeing a hostile work environment towards women at the company he built. He was accused of overseeing a ‘racist’ stop and frisk policy as mayor in New York.

The data-centric Bloomberg said there was no path to victory any more. ‘I am clear eyed about our overriding objective, and that is victory in November. Not victory for me or our campaign but for our country,’ he said.

He said the goal was to defeat Trump and ‘staying in would make it more difficult to achieve that goal.’ It could have allowed him to split votes with Biden and give Bernie Sanders an expressway to the nomination. 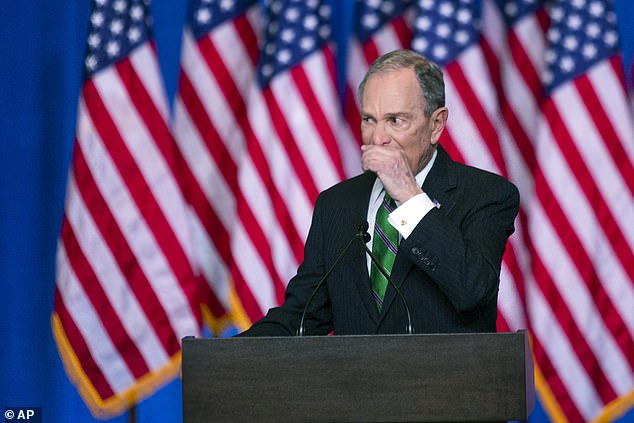 Bloomberg called Biden ‘my friend and a great American Joe Biden’ – earning applause from his staff, following reports Tuesday his advisors were lobbying him to get out of the race.

‘This really is the best, most creative, most hard-working campaign team ever assembled,’ he said.

‘And I have to say, there is no doubt in my mind we would’ve beaten Donald Trump in November. And you know who else knows that? Donald Trump. He’s been scared stiff of us and for good reason,’ Bloomberg added. ‘Because every time he hit us, we hit back twice as hard. And unlike his jabs, our punches packed the truth.’

He spoke at his headquarters shortly after Vermont Sen. Bernie Sanders tore into Biden’s voting records, indicating that the nomination fight is far from over.

It remains to be seen exactly how Bloomberg will deploy his personnel and financial resources. Campaign finance laws prohibit coordinating with a campaign, but he is generally allowed to engage in his own efforts to back candidates or issues.

The billionaire gained just 44 delegates by 10.11am, the time he announced his departure – but ran up a bill of $1 billion.

He immediately and whole-heartedly backed Biden, the night’s big winner, hinting that his vast fortune is now at the former vice-president’s disposal.

‘I’ve always believed that defeating Donald Trump starts with uniting behind the candidate with the best shot to do it,’ he said.

‘After yesterday’s vote, it is clear that candidate is my friend and a great American, Joe Biden.

‘I’ve known Joe for a very long time. I know his decency, his honesty, and his commitment to the issues that are so important to our country – including gun safety, health care, climate change, and good jobs.

‘Today I am glad to endorse him – and I will work to make him the next President of the United States.’