‘Congratulations fellas!’ President Biden video calls the Irish rugby team with his brother and sister after their emphatic win over New Zealand

Joe Biden and his brother Jimmy, 71, and sister Valerie, 76, video called the Irish Rugby team to congratulate them for their win over New Zealand.

‘We’re so damn proud of you, really and truly,’ the president said while holding a cell phone between his siblings and introducing them to the team.

‘When I was down in New Zealand not long ago I was bragging about you guys,’ Biden said. ‘They almost didn’t let me off the island, you know what I mean?’

He followed with: ‘Congratulations fellas.’

Laughing and cheering could be heard on the other line of the call in the two-and-a-half minute video of the talk.

The Biden’s are of predominantly Irish descent with ten of his sixteen great-great grandparents being born in Ireland.

‘Yesterday, the President and members of his family called the Irish Rugby Football Union to congratulate the team for their victory over the New Zealand All Blacks,’ the White House released in a statement on the call.

It added: ‘The President had written to Team Ireland on Friday to wish them luck ahead of the Test match in Dublin.’ 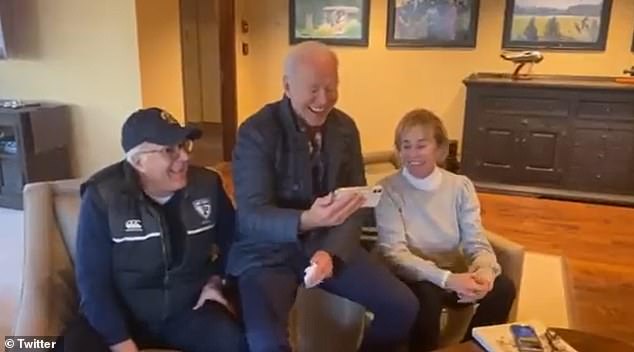 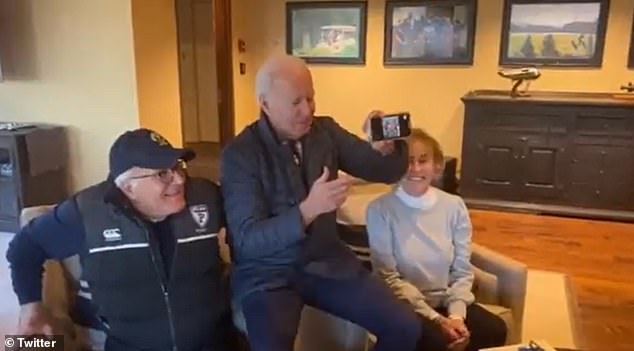 Biden introduced the team over video call to some of his family members, including his brother Jim (left) and sister Valerie (right) who were sitting next to him 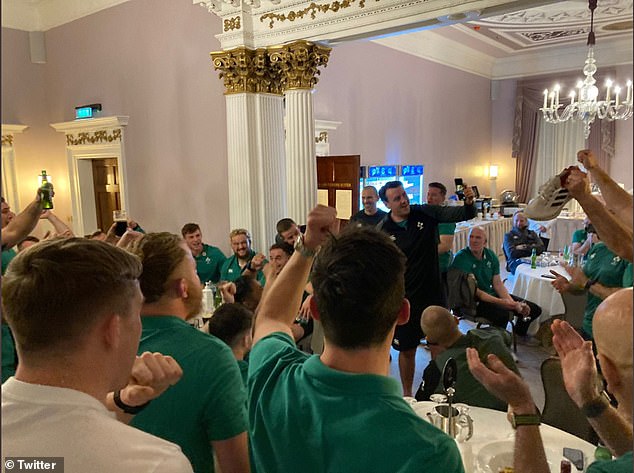 The team shown here on the other side of the call with Biden from JJ Bowles, a pub in Limerick

Biden returned to Washington on Sunday after spending the weekend in Camp David.

On Saturday, Ireland celebrated their greatest win of the Andy Farrell era so far as they deservedly held on to defeat New Zealand 29-20 in a pulsating Dublin Test match.

The Irish controlled much of Saturday’s frenetic contest against the world’s top-ranked side at a boisterous Aviva Stadium.

New Zealand, who lost influential fly-half Beauden Barrett to injury early on, arrived in the Irish capital in record-breaking form having scored an unprecedented 675 points and 96 tries in winning 12 of 13 fixtures this calendar year.

Although Ian Foster’s men struggled to contain the hosts, they remained within touching distance until the final whistle following scores from Codie Taylor and Will Jordan, while Akira Ioane had a try chalked off.

But they could have few complaints about the end result as Ireland impressively registered only a third win from 33 meetings with their opponents to partially avenge their World Cup quarter-final exit of 2019, which marked the end of Joe Schmidt’s reign. 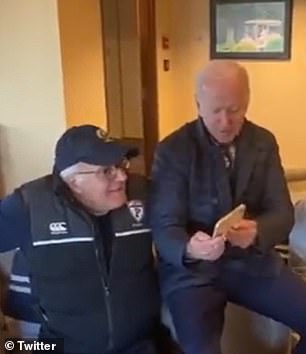 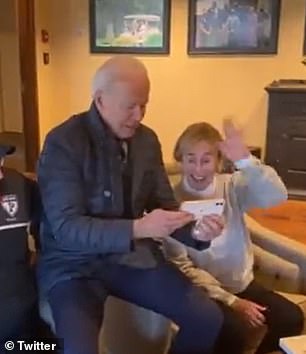 Biden introduced the Irish rugby team to his brother Jimmy, 71, (left) and his sister Valerie, 76, (right) 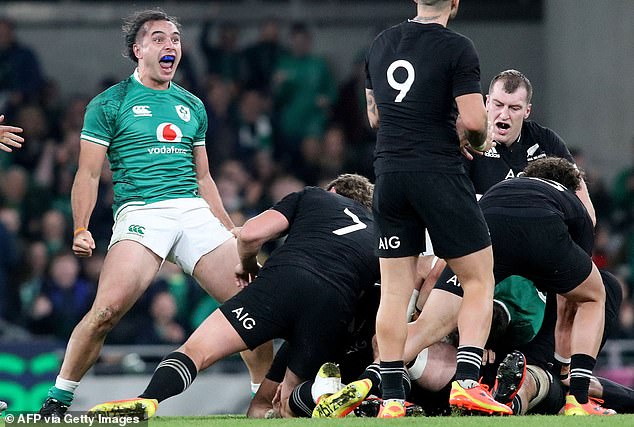 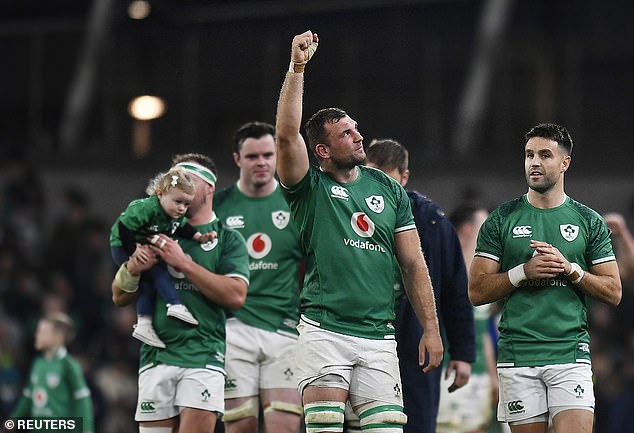 The Irish team celebrated their win on Saturday

Ireland’s build up included the disruption of undergoing additional PCR testing on Friday following the false alarm of a potential case of coronavirus for an unnamed player, in addition to a letter of support from United States President Joe Biden, who has Irish ancestry.

The home side met the Haka by taking a collective stride forward before a rendition of The Fields of Athenry broke out among the stadium’s first capacity crowd for a rugby match in almost two years.

Farrell’s men did not look to be unduly affected by the previous day’s COVID-19 episode and began like a team intent on building on last weekend’s impressive demolition of Japan.

Despite requiring a remarkable combined tackle from Garry Ringrose and Andrew Conway to stop Jordie Barrett crossing early on, they deservedly went ahead in the immediate aftermath of Taylor being sin-binned after catching Johnny Sexton’s head with a shoulder.

Quick ball from right to left culminated in Hugo Keenan teeing up former Maori All Blacks player Lowe – one of three native Kiwis in Ireland’s starting XV – to dive over in the left corner for the second-successive week.

The 15th-minute score increased the noise in the stands but was swiftly tempered by Barrett slotting a penalty to reduce the deficit after Sexton missed the conversion.

Ireland captain Sexton later received on-field treatment for an apparent leg issue before the scoreboard swung in the All Blacks’ favor in an action-packed three minutes.

After Ireland prop Tadhg Furlong had a try disallowed following incessant home pressure, the Kiwis broke and the returning Taylor latched on to Dalton Papalii’s pass to touch down, with Barrett adding the extras to ensure they led at the break.

Ireland continued to pen the visitors back but were lacking the clinical edge head coach Farrell called for at his pre-match press conference.

They improved considerably on that front early in the second period.

Hooker Kelleher bulldozed over to level the scores at 10-10 with his sixth try from only seven international starts.

Sexton struck the posts with his conversion but made no mistake seven minutes later after flanker Doris exploited a gap in the All Blacks defense to charge clear into their 22 and dot down to the delight of the lively home crowd.

Despite Ireland’s prolonged dominance, the three-time world champions refused to roll over.

All Blacks winger Jordan helped bring them to within just three points, chipping over the top and then receiving the ball back from Rieko Ioane to zoom clear and touch down.

Sexton departed gingerly for a head injury assessment 15 minutes from time and replacement Carbery soon kicked a penalty to make it 23-17 during an influential cameo.

New Zealand threatened to steal what would have been a unmerited victory when Akira Ioane dotted down. 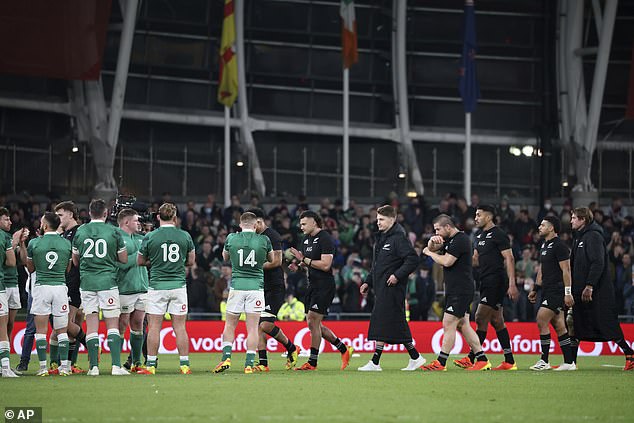 The final score on Saturday was 29-20

But that score was eventually ruled out for a forward pass and they had to settle for just the consolation of another Barrett penalty.

Ireland, who complete their autumn campaign at home to Argentina next weekend, will embark on a three-Test tour of New Zealand next summer and were not to be denied.

A couple more penalties from Carbery guaranteed a seventh-successive win, prompting a deafening noise from the delirious terraces followed by a lap of honor.

Tags: Biden, Calls, Irish, ru, the, video
You may also like
Celebrities News