Transport Minister Rita Saffioti revealed in parliament on Tuesday the government had also entered into a $327 million contract with Finnish telecommunications giant Nokia and Networks Australia—$121 million more than the Huawei deal. 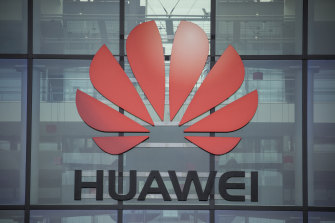 The WA government will pay a Huawei led consortium $6.6 million over a failed Metronet contract.Credit:Bloomberg

“After significant negotiation, both parties agreed that Huawei could not fulfil its contractual obligations and the contract was terminated in September 2020,” she said.

“The Public Transport Authority has recently reached a termination settlement of $6.6 million with the Huawei–UGL consortium.”

The PTA cancelled the contract because trade restrictions imposed by the United States created a force majeure event, meaning both parties could walk away with minimal costs.

The deal was to build 80 mobile towers along Perth’s railway corridors in a consortium with UGL to upgrade Metronet’s ageing analogue communications system, with work estimated to have been completed by the end of last year.

The network would be used for communications between train drivers and Metronet’s headquarters, but could also be used to support body-worn cameras, CCTV and live tracking of personnel and assets.

The US introduced restrictions in 2019 over concerns Huawei breached trade sanctions with Iran.

However, the WA deal faced further scrutiny after Huawei technology was banned from Australia’s 5G network over security concerns.

In 2020, the company faced allegations it could covertly access mobile networks around the world through backdoors designed for use by law enforcement agencies.

Later that year, a UK parliamentary inquiry found there was evidence of collusion between Huawei and the Chinese Communist Party. Huawei has maintained it is not influenced by the CCP.

Saffioti said it was “extremely unfortunate” the project was caught up in a China-US trade dispute.

“We still need to procure a new digital radio network for our rail system, particularly as it is required to enable the rollout of the train control and signalling project, with that project currently under procurement,” she said.

“The high-capacity signalling program of works will replace the existing Transperth rail network signalling system with one that allows for increased service frequencies to meet the rail demand that is forecast under long-term transport planning.”

A closed tender process started in September 2020 between Nokia and Telstra–Ericsson, with Nokia the successful bidder.

Saffioti said the new system was expected to enter service in phases during 2025.