Publicist Lionel Midford confirmed the “saddest news” on Monday night, describing Parkinson as a “legendary recording artist with a powerful and soulful voice”.

“Doug Parkinson passed away suddenly at home,” he said in a statement. “Doug Parkinson was widely considered one of the most unusual and influential singer/songwriters in the history of contemporary music.” 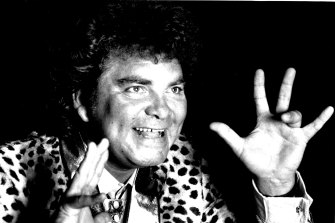 Douglas Parkinson has died at home in Sydney. Credit:Fairfax archive

Parkinson began singing as a schoolboy, forming Strings and Things and then The Questions in the 1960s, the latter supporting The Who and Small Faces on a national tour.

He formed Doug Parkinson in Focus, recording a cover of The Beatles’ Dear Prudence in 1969 which earned him worldwide fame.

The rocker’s son, Daniel Parkinson, told The Sydney Morning Herald and The Age on Monday night that his father was “one of the greatest professional musicians of this country”.

“He had, I think, an especially high standard of music – playing and proficiency,” he said.

“He was very demanding in terms of what he expected from musicians and what he gave out on stage. He was always an absolute professional … that’s the thing I’ll remember about him.”

Parkinson, who called Collaroy home, had a number of upcoming shows in various states including at the Thebarton Theatre in Torrensville, South Australia on Thursday.

He is survived by his wife, Suzie, and their sons, Daniel and John.