Australia closes the border: Non-residents are banned from entering the country from 9pm tomorrow – as PM says 80 per cent of virus cases were brought in from overseas

The Prime Minister has closed Australia’s borders to prevent the spread of coronavirus.

From 9pm on Friday night, only Australian permanent residents and citizens will be allowed to enter the country.

Scott Morrison said he made the drastic move because 80 per cent of Australia’s 636 coronavirus cases have come in from abroad.

The ban, which has no end date, is likely to cause chaos for thousands of temporary residents who live and work in Australia, such as people on skilled work visas.

The ban does not apply to direct family members of permanent residents and citizens. 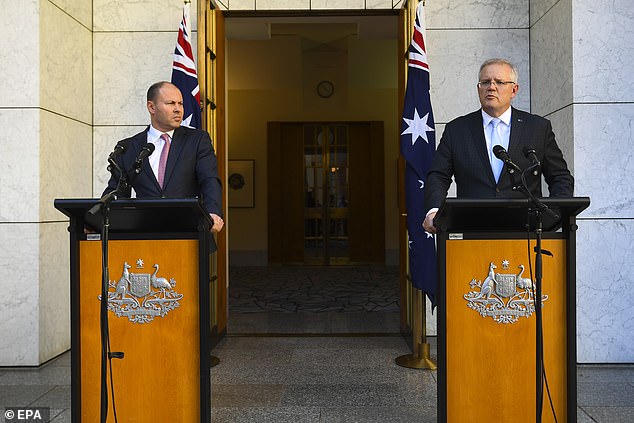 From 9pm on Friday night, only Australian residents and citizens will be allowed to enter. Pictured: Scott Morrison (right) and Treasurer Josh Frydenberg today

Announcing the ban, the Prime Minister said: ‘We will be resolving to move to a position where a travel ban will be placed on all non-residents, non-Australian citizens coming to Australia, and that will be in place from 9pm tomorrow evening.

‘For Australians, of course, they will be able to return and they will be subject, as they already are, to 14 days of isolation upon arrival back in Australia.’

‘So, the overwhelming proportion of cases in Australia have been imported.’

Mr Morrison said the world-wide travel ban was an extension of existing bans on people coming from Italy, South Korea, Iran and China.

‘Measures we have put in place have obviously put an impact on that and this is a further measure now that that can be further enhanced,’ he said.

New Zealand has made the same move, also shutting the border to non-residents.

Prime Minister Jacinda Arden urged more than 600,000 New Zealanders living in Australia not to go home because that may increase the spread of the virus.

Ms Ardern and Mr Morrison consulted each other before agreeing to shut the borders.

‘Those in remote parts of the world, that can prove challenging but for those in other places, it is our intention to ensure we can maintain flights to enable them to come home as soon as possible.’

‘I also want to say to Australians that there are no issues with Australians’ food supply. What there is an issue with is the behaviour of Australians at supermarkets.

‘Frankly there are some Australians not giving Australia a very good name at the moment with their behaviour.

‘I understand they’re anxious. But for the next six months we need to work together,’ he said.

New Zealand Prime Minister Jacinda Ardern has closed the country’s borders to all but residents and citizens to stop the spread of coronavirus.

‘We need to continue to make further decisions and further restrictions,’ she said during the announcement on Thursday.

The ban will be in place for planes landing in New Zealand after 11.59pm on Thursday. 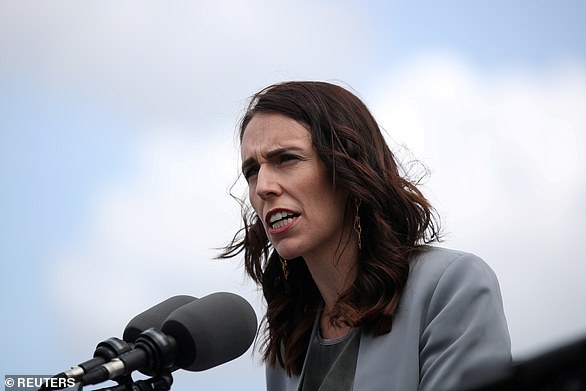 She said the more than 600,000 New Zealanders living in Australia should stay and not travel.

‘While we do not have community transmission, it is in Australia. It is in everyone’s interest that they stay put,’ she said.

Ms Ardern said all cases of coronavirus in the country had come from overseas, and had not been transmitted between people in New Zealand.

Only New Zealand citizens and permanent residents – and their children and partners – will be able to enter the country.

Ms Ardern said there will be exemptions for specific people including health professionals.

‘I’m not willing to have risks here and that’s why we’re making this decision,’ she said.

There are 28 confirmed cases of coronavirus in New Zealand.

Interest rates cut to a record low of 0.25% as the Australian dollar plummets to lowest in 17 YEARS amid coronavirus panic

The Reserve Bank has cut interest rates to a new record low of 0.25 per cent as the Australian dollar sank close to 55 US cents for the first time in more than 17 years.

For the first time ever, the central bank has explicitly signalled it will buy government bonds to inject liquidity into the financial system under a radical policy known as quantitative easing.

It is also providing $90billion worth of credit to banks so they lend to small and medium-sized businesses during the coronavirus crisis. 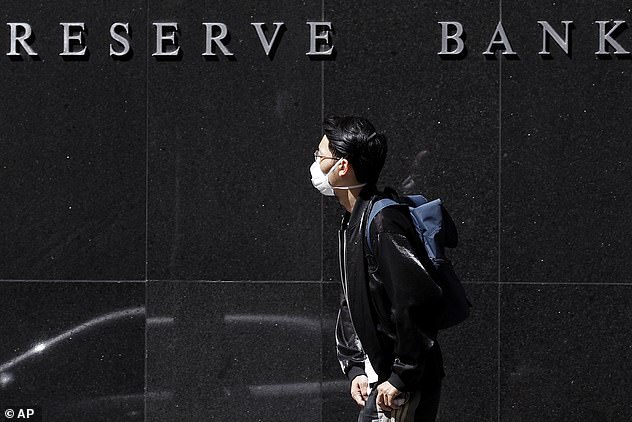 The Reserve Bank has cut interest rates to a new record low of 0.25 per cent as the Australian dollar sank close to 55 US cents for the first time in more than 17 years. For the first time ever, the central bank has explicitly signalled it will buy government bonds to inject liquidity into the financial system under a radical policy known as quantitative easing

In an uncharacteristic move for a central bank governor, Philip Lowe fronted the media at 4.30pm, Sydney time, after financial markets had closed and delivered an address for the TV cameras on the COVID-19 crisis.

‘We are clearly living in extraordinary and challenging times,’ Dr Lowe said.

‘The coronavirus is first and foremost a very major public health problem.

‘But it has also become a major economic problem, which is having deep ramifications for financial systems around the world.

‘Understandably, our communities and our financial markets are both having trouble dealing with a rapidly unfolding situation that they have not seen before.

‘We are doing what we can to lower the cost of credit.’

Prime Minister Scott Morrison also confirmed the government was working with the banks so they don’t repossess the homes of borrowers who lost their jobs.

‘That’s exactly the sort of thing we’re working on,’ he said. 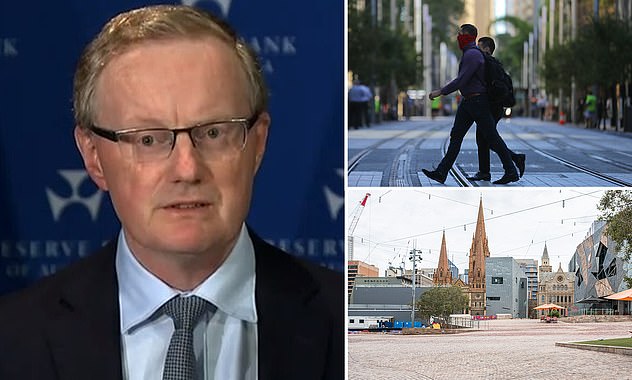 In an uncharacteristic move for a central bank governor, Philip Lowe fronted the media at 4.30pm, Sydney time, after financial markets had closed and delivered an address for the TV cameras on the COVID-19 crisis. ‘We are clearly living in extraordinary and challenging times,’ Dr Lowe said.

The RBA had already reduced the cash rate to 0.5 per cent at its regular meeting this month in a bid to stimulate the economy, as the global COVID-19 pandemic threatens to spark the first recession in 29 years.

The central bank met again just two weeks later on Thursday, outside of its usual meeting on the first Tuesday of every month, to announce the cash rate would be cut by another quarter of a percentage point.

Dr Lowe acknowledged coronavirus was a threat to the economy.

‘The coronavirus is first and foremost a public health issue, but it is also having a very major impact on the economy and the financial system,’ he said in a statement on Thursday announcing the rate cut.

A cash rate of 0.25 per cent means Australia’s official interest rate is just one cut away from being at zero.

The Australian dollar bounced on the announcement, jumping from a near 18-year low 55.41 US cents to 55.57 US cents by 2.32pm Sydney time, or two minutes after the RBA announcement. 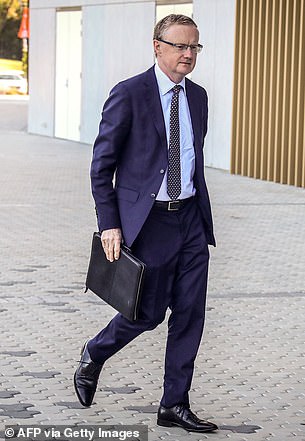 ‘The current situation of extreme uncertainty and economic fragility makes it difficult to expect housing market activity to lift against the historically low cost of debt,’ it said.

‘As the coronavirus pandemic broadens, and the probability of an Australian recession increases, consumer confidence is trending lower from an already weak position.

‘This will likely weigh on high commitment consumer spending decisions, such as buying or selling a home.’

Interest rates have been cut three days after the Reserve Bank of New Zealand cut its equivalent cash rate by a more dramatic 75 basis points to 0.25 per cent.

The US Federal Reserve this week also slashed its target federal funds rate by a full basis point to zero to 0.25 per cent.

Digital Finance Analytics principal Martin North said quantitative easing, while designed to encourage lending, would do little to stimulate demand as indoor groups of 100 or more people are banned in Australia.

‘It may not be the right tool,’ he told Daily Mail Australia on Thursday.

‘Quantitative easing is about supporting the financial system, it’s trying to put liquidity into the system but the real economy isn’t working and we’re trying to address the wrong problem.’

Mr North, an economist, said there was a danger of a weaker Australian dollar making imported components for production more expensive.

He feared an increase in imported fertiliser prices could make food more expensive and spark a surge in inflation.

‘Any raw materials that we bring into the country, for example fertilisers, they’re going to be a lot more expensive,’ Mr North said.

‘The cost of that is going to be a lot higher, it’s going to have a series of knock-on effects. So the cost on the economy is dramatic.’ 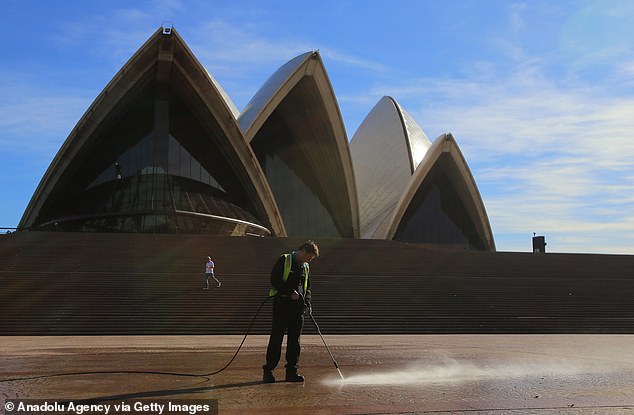 The RBA had already reduced the cash rate to 0.5 per cent at its regular meeting this month in a bid to stimulate the economy, as the global coronavirus pandemic threatens to spark the first recession in 29 years. Pictured is the Sydney Opera House without the usual crowds

Tags: 'No, Australia, border:, shuts, the
You may also like
Celebrities News