One of Melbourne’s most significant street art laneways will be destroyed under a proposal for a 41-storey development near the Queen Victoria Market.

Blender Lane was once the epicentre of Melbourne’s street art movement and international and local artists featured on the walls of the laneway included French street artist Blek le Rat, British artist Moose and Australian Rone. 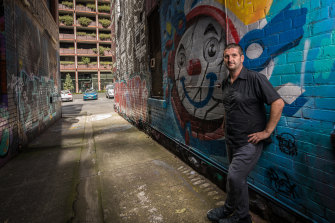 Artist Adrian Doyle in Blender Laneway which is slated to be destroyed under a development proposal.Credit:Scott McNaughton

Adrian Doyle, artist and director of The Blender Studios, said the planned destruction of art in the laneway was typical of the disregard by developers for what made Melbourne special.

“The wall is significant,” he said. “It’s part of the history of Melbourne that once lost will never be regained. These people are making their money and running but leaving us a shitter city and at what point do we say no?”

Owners GU Investments and Burbank Holdings have proposed the partial demolition of the laneway and buildings at 100-106 Franklin street to build a $250 million tower with retail space, office space, apartments and basketball court.

Doyle warned the development was another blow to Melbourne, with increasing amounts of street art and laneways being lost to redevelopment. 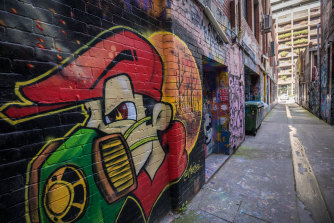 Blender Lane was once the epicentre of Melbourne’s street art movement. Credit:Scott McNaughton

“We’re just no different than any other city any more and taking away these things is making us almost banal like any airport,” he said.

“It’s the sights and smells and the sounds of Melbourne that make it so beautiful and this chapter in Australian art history is the largest art movement in Melbourne’s history ever and changed art.”

Doyle said the most significant art in Blender Lane was protected beneath a layer of anti-graffiti coating and the work captured the beginning of the street art movement in Melbourne from the early stencilists to new muralism.

“Street art particularly is ephemeral by nature,” he said. “For me to sit there and go ‘you can’t do this, or you can’t do that’ is hypocritical, but having said that, if they were only to rub off all that dirty paint and look what’s hidden underneath that beautiful anti-graffiti coating which covered the whole back area, they would be absolutely mind blown.” 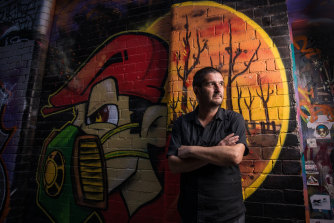 Developer Landream’s proposal by architects Bates Smart would double the width of Blender Lane and give an additional 103 square metres in public space.

Mitchell Crawford, senior development manager at Landream, said the construction would maintain the area’s history through the preservation and restoration of the Burbank House building on 100 Franklin Street and through design references that paid tribute to the site’s former use as refrigeration pioneer James Harrison’s Victorian Ice Works in 1859.

“The widening will also allow for further activation of the laneway, offering the opportunity for outdoor seating and new perspective of the existing and ever-evolving street art,” he said.

The development proposal goes before the City of Melbourne next week and deputy lord mayor Nicholas Reece said the council was aware of the significance of the street art in the laneway. 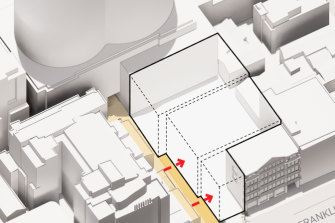 “Every cool kid in Melbourne knows Blender Lane. The tourists go to Hosier Lane but the cool cats go to Blender Lane,” he said.

Cr Reece said the planning system did not recognise walls that were popular with street artists as something that needed to be taken into account when making decisions on planning applications.

The Keith Harding mural in Collingwood is the only protected street art on the Victorian Heritage Register in Melbourne, with no protections in the CBD, even for Hosier Lane.

Cr Reece said the council also had to consider the rights of the building owner.

“They may not be too happy at excessive protection or a limit on their development rights just because one of the walls has become popular for graffiti and street art,” he said.

The development would extend Blender Lane and connect a series of laneways, creating a pedestrian precinct through to the Victoria Markets.

“There’s a tricky balance between protecting outstanding examples of street art and enabling the continued evolution of what is by nature an ephemeral art form,” Cr Reece said. “Street artists create the work knowing it is up for a good time not a long time.”

Tags: 'No, at, Do!, point, Say, We, what
You may also like
Celebrities News