Highly valuable art acquired during more than 50 years of marriage was sold in a matter of hours in a record-breaking auction, following a New York couple’s divorce.

Real estate mogul Harry Macklowe and his wife Linda were ordered by a court in 2018 to sell their blue-chip art collection and split the proceeds, amid their divorce proceedings. The art collection spanned decades and included works by Jackson Pollock, Mark Rothko and Cy Twombly. 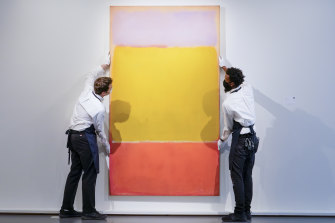 The “Macklowe Collection,” as it became known, garnered $US676.1 million ($923.95 million) in sales late on Monday in the presence of more than 300 art lovers, according to auction house Sotheby’s. The eye-watering figure is based on each of the pieces being a “consummate masterpiece,” it said.

“There is no question that the market raised its hands tonight, not just for masterworks, but in honour of the art of collecting at its highest level,” Mari-Claudia Jimenez, Sotheby’s chairman, managing director for global fine art, said in a statement.

“Acquired over the course of half a century, the collection reflects decades of pursuit, honing and refining, driven by immense patience and an innate understanding of quality,” Sotheby’s said about the auction in a statement.

The Macklowes married in 1959 and filed for divorce in 2016. Linda Macklowe, a long-time collector and curator, was appointed an honorary trustee of the Metropolitan Museum of Art in 2016 for her “dedication” to art and education, the museum said at the time, hailing her vast postwar and contemporary art collection.

In 2019, Harry Macklowe married Patricia Landeau and made headlines when he erected large images of himself and his new wife on the side of one of his New York buildings.

The Macklowe Collection comprises 65 works in total. More than half were sold on Monday and the remainder will be auctioned in New York in May 2022, Sotheby’s said.

Among the 35 artworks, the most valued was Rothko’s No. 7, from 1951 that sold for $US82.5 million after an eight-minute bidding battle. It was the second-highest price for a work by the late abstract artist and the first time the painting had come to auction. The identity of the buyer of the painting, composed of three luminous and distinct bands of colour, was not known but it provoked fierce phone bidding from people representing Asian clients, Reuters reported. 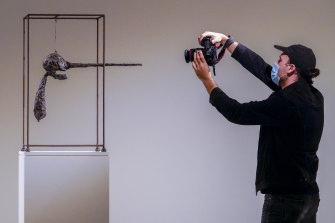 Made of bronze, steel and iron, “the nose” sculpture is emblematic of the 20th century sculptor’s works of craggy, emaciated figures.

American artists did well, too. Pollock’s Number 17, 1951 part of his Black Pourings or Black Paintings series, fetched $US61.2 million, an auction record for the artist and more than double its $US35 million estimate. Pop artist Andy Warhol’s Nine Marilyns silk-screen from 1962, made shortly after Marilyn Monroe’s death, sold for $US47.3 million and depicts the Hollywood actress in nine impressions in a sequence across three rows.

The collection had been estimated to earn around $US400 million with Monday’s total exceeding many in the art world’s expectations.

“I am very, very pleased and happy,” Harry Macklowe told Artnet after the auction. “I feel very privileged.” His ex-wife Linda was also in attendance but did not speak to press, Artnet said. 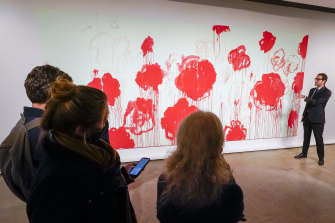 Monday’s auction marks a revitalising moment for the international art market, which has weathered the coronavirus pandemic. Sales plummeted in value by 22 pre cent in the art market in 2020, according to a report by Art Basel and UBS.

Participants from 25 countries took part in the historic auction, Sotheby’s said, with presale exhibitions of the collection attracting more than 27,000 visitors in places such as Shanghai, Tokyo and London.

“The Macklowe Collection stands in a league of its own as the greatest collection of Modern and Contemporary Art ever to come to the market,” Patrick Drahi, Sotheby’s owner, said in September announcing the auction, wherein he predicted, “The sale will make history.”

Tags: Art, auctioned, coup, in, new, York
You may also like
Celebrities News