Get ready for a white weekend! Arctic blast is set to send temperatures plunging to -5C with up to 9cm of snow expected across Scotland, north west and central England

An Arctic blast is set to send temperatures plummeting to -5C this weekend and blanket parts of Britain in snow while thousands of homes remain without heating a week after Storm Arwen destroyed power lines across the country.

The Met Office said a flurry of snow is set to hit Scotland today, before eastern parts of the country are covered in 9cm of the white stuff tomorrow.

Eastern parts of Scotland are predicted to have highs of 2C today while western Scotland could reach 4C – before temperatures fall as low as -5C at the weekend. Weather maps shared by WXcharts.com suggest that even 12cm of snow could fall early next week.

Steven Keates, Media Advisor and Marine Meteorologist at the Met Office, said: ‘It’s fairly typical early December weather for the next few days. It’s generally quite cold, with a bit of snow around.

‘Snowfall can be seen mainly over the higher ground for the most part and is unlikely to cause too many problems.’

He added: ‘We are not really expecting any issues for the morning commute, but don’t be surprised to run into a bit of sleet or wet snow on the commute across East Anglia/SE England. There is a scope for some snow across central/eastern England this morning, maybe the odd cm on the grass, but it looks short-lived and may soon turn back to rain.

‘Some snow over the mountains in the north, maybe as far south as Wales, from the showers on Saturday.’

The Army has been deployed to help thousands of people who are still without power a week after Storm Arwen ripped through the country.

Around 130 troops have been sent to carry out door-to-door checks and offer welfare support in north-east of Scotland, where 1,600 Scottish and Southern Electricity Networks customers remained off supply at 7am on Friday. 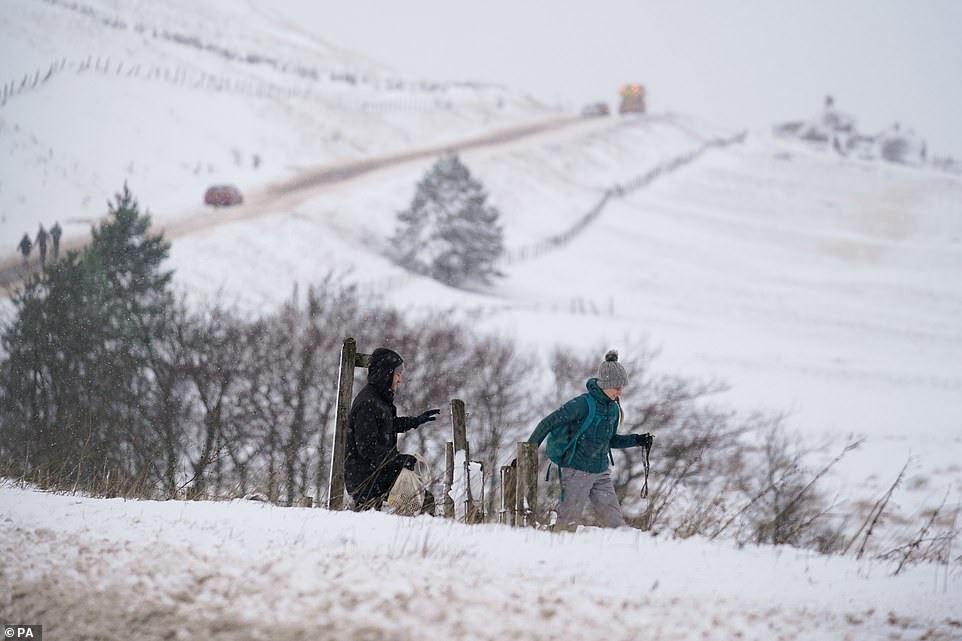 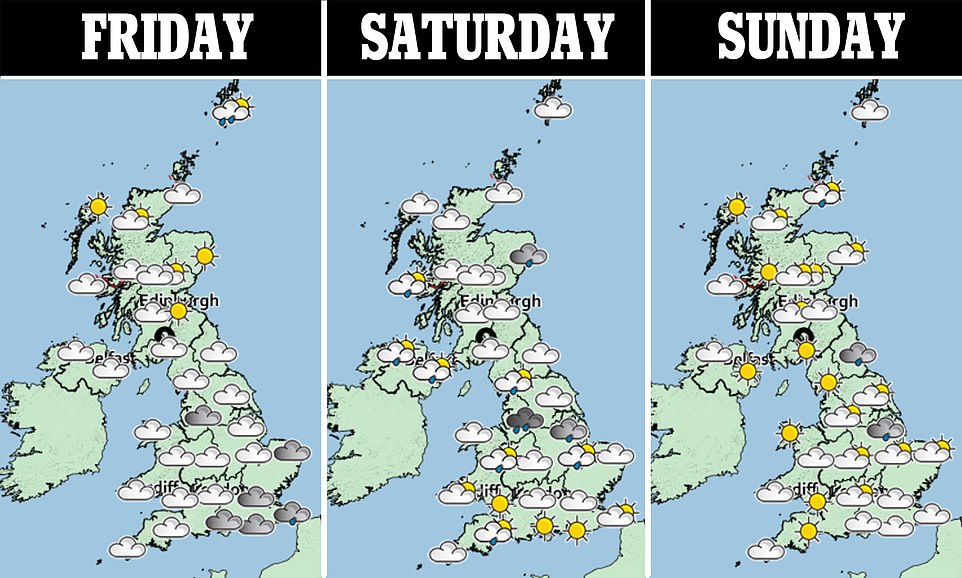 The Met Office said a flurry of snow is set to hit Scotland today, before eastern parts of the country are covered in 9cm of the white stuff tomorrow. Eastern parts of Scotland are predicted to have highs of 2C today while western Scotland could reach 4C – before temperatures fall as low as -5C at the weekend 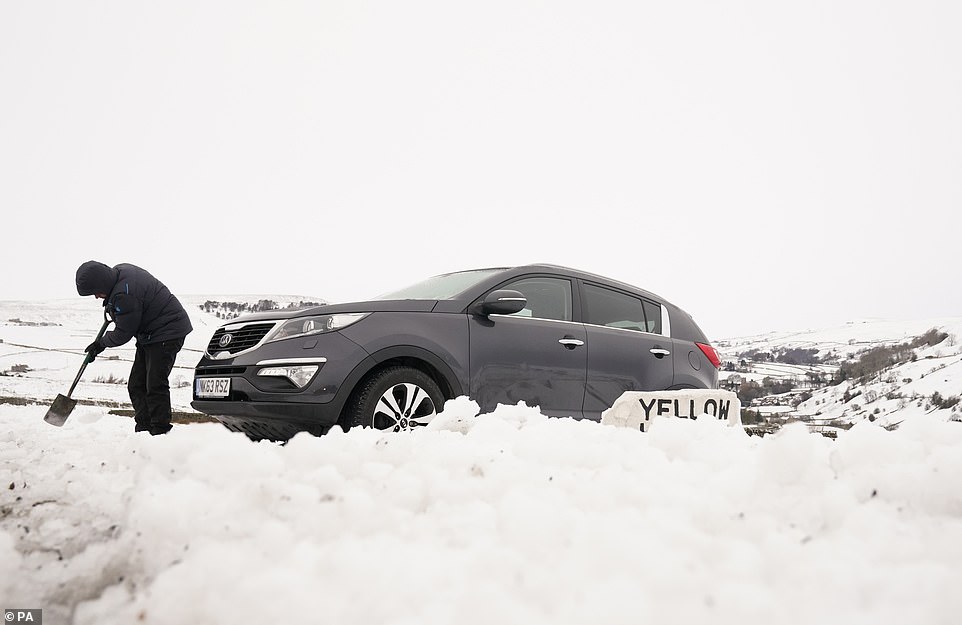 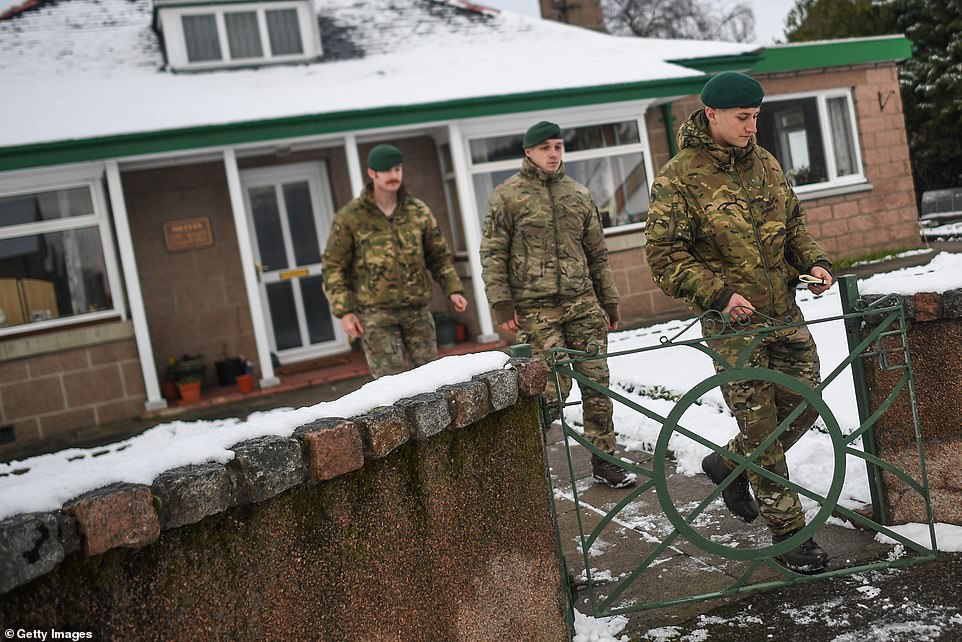 The Met say there will be snow on hills this weekend which will then spread further into the start of next week.

And those hoping for a White Christmas could be in for having their festive wishes come true. Bookmakers Coral said there was a 67 per cent chance of snow falling somewhere in Britain on Christmas Day.

The Met Office said weather is ‘likely to become more settled around Christmas and towards New Year with increased chance of overnight frost and fog during clearer spells’.

South of the border, Durham County Council said around 100 servicemen and women will be based in Weardale to help local people.

Northern Powergrid, the electricity distribution network operator for the North East, Yorkshire and northern Lincolnshire, said 6,000 customers remained off supply at 11pm on Thursday, though power has been restored to 234,000 others since Storm Arwen swept across the country on Friday November 26.

Jim Savage, chief executive of Aberdeenshire Council, said SSEN told him it hopes to get the number of customers off power down to 1,000 on Friday, though some may not be reconnected until the weekend.

He told BBC Breakfast: ‘It’s been a really tough week for families and communities across all of Aberdeenshire. There has been an amazing effort of support from communities and emergency services here to make sure people are safe as we look to get the power back on as soon as we can.’

He added: ‘SSEN have got many hundreds of their staff out on the ground and have been going through all of the lines they’ve got and fixing and repairing as they go, and in the meantime many other services are making sure the communities are safe, they’ve got what they need in terms of whatever food and heating and support and accommodation we can provide.

‘I think the really unfortunate thing is we think there’s still going to be people who are going to be off into the weekend, so we continue to ramp up and do whatever more we can do to support people in what has been a very extended period of time with that national infrastructure having gone down.’ 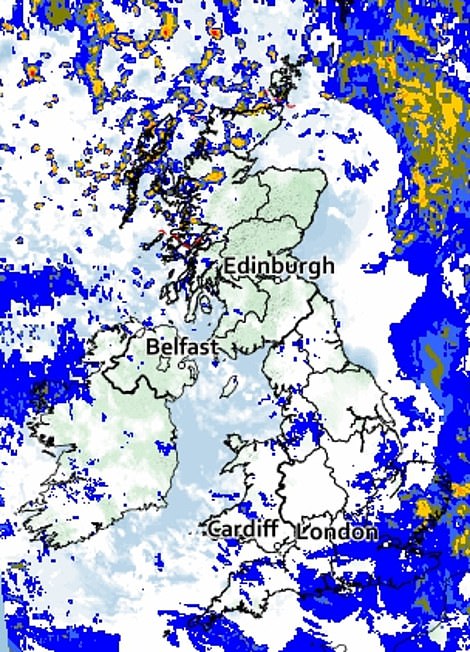 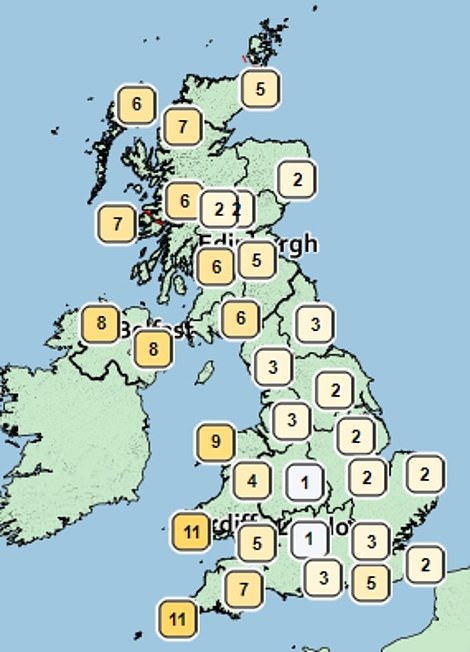 Steven Keates, Media Advisor and Marine Meteorologist at the Met Office, said: ‘It’s fairly typical early December weather for the next few days. It’s generally quite cold, with a bit of snow around. Snowfall can be seen mainly over the higher ground for the most part and is unlikely to cause too many problems’ 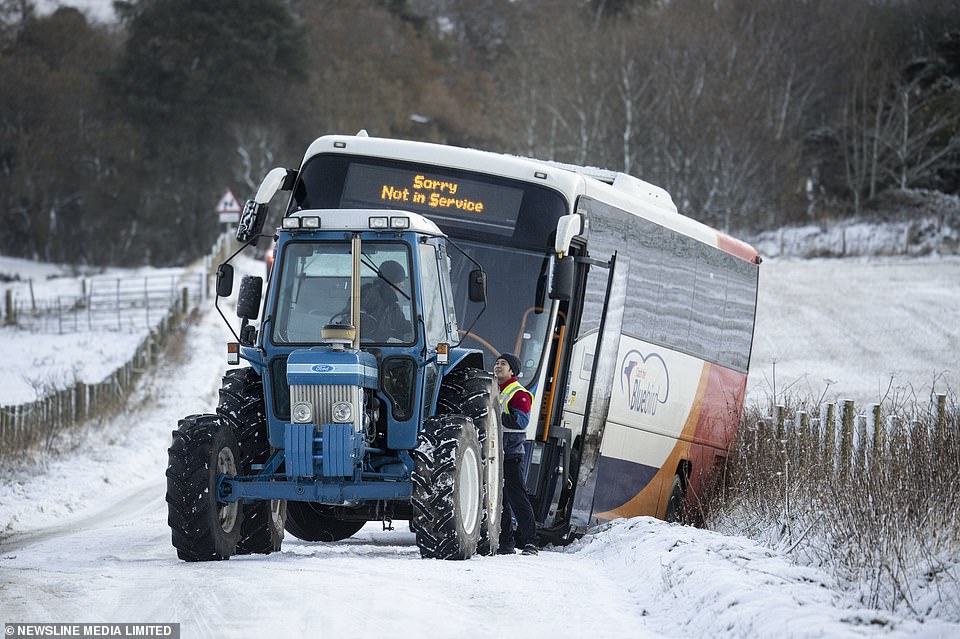 A tractor tries to help a bus driver after the vehicle came off the road in icy conditions near Stonehaven, Aberdeenshire 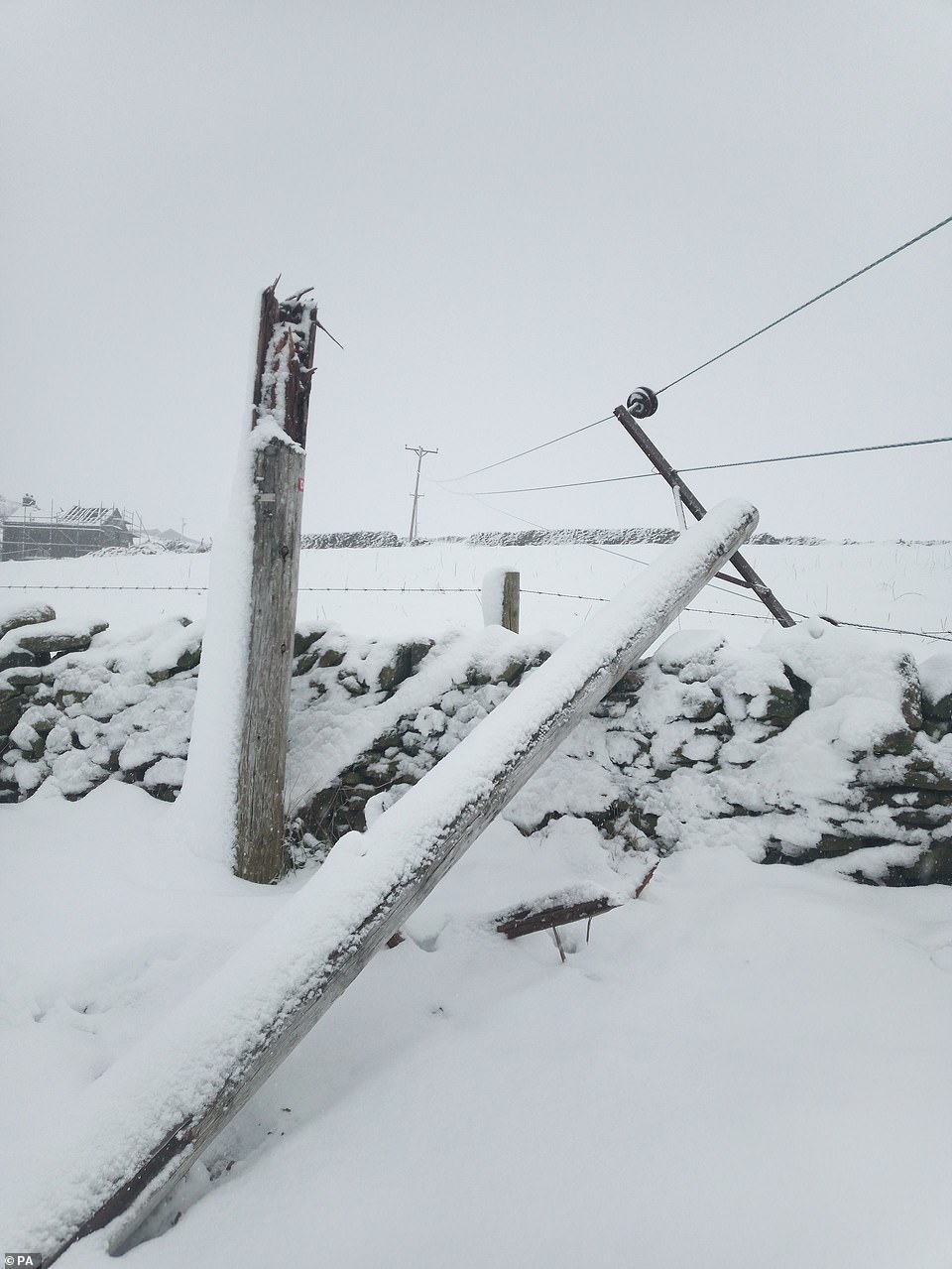 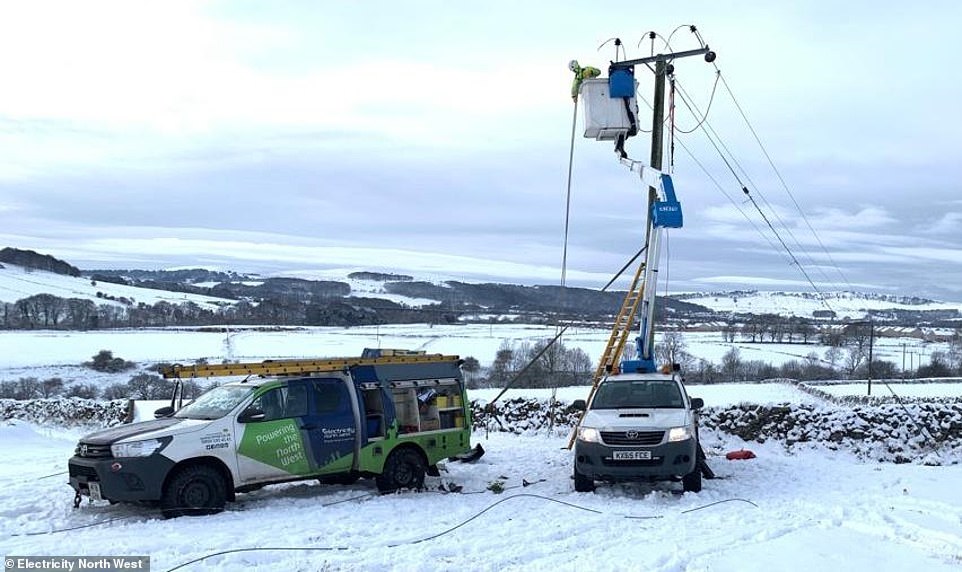 Prime Minister Boris Johnson said around 130 troops have been sent to the Grampian region of northern Scotland, where 3,000 homes have no heat or light after 100mph gales caused damage to power lines 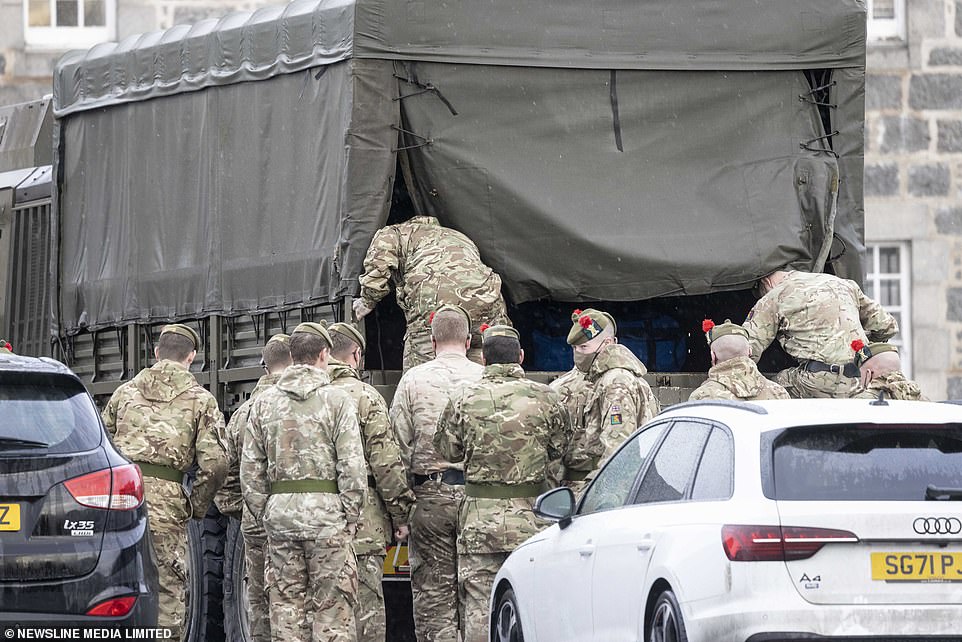 SSEN said power has been restored to more than 129,000 customers since Storm Arwen first struck, causing what managing director Chris Burchell described as ‘catastrophic damage to the electricity network’.

The company said properties still without power are mainly located in rural and isolated communities, with Aberdeenshire the main area still affected.

Defence Secretary Ben Wallace said: ‘We are always ready to provide extra support to civil authorities across the UK in their time of need and it’s great to see units based in Scotland supporting their local communities.

‘Our dedicated armed forces will conduct door-to-door checks on people in their homes, providing essential support to those impacted by Storm Arwen.’

John Hewitt, chairman of the LRF’s strategic co-ordinating group, said: ‘We are doing everything we can to support residents who are affected by the disruption to power supplies, from providing emergency supplies to simply checking in to make sure everything is OK.’

He added: ‘We are very grateful to the Ministry of Defence that they have approved our request for support and that we already have troops on the ground helping our communities.’

The council said servicemen and women, based in St John’s Chapel in Weardale, will carry out door-to-door visits to check on residents’ wellbeing and ensure any help and support is provided where needed.

They will also provide updates on work to restore the power supply and gather feedback on any issues of concern.

By Jacob Thorburn For MailOnline

Dramatic footage has captured the moment a farming couple were forced to dig their sheep out of a 10ft snowdrift during a snap blizzard caused by Storm Arwen.

Kate and Nev Barker worked for hours to find their missing flock on Saturday, November 27, after heavy snow hit their farm in Staffordshire farm, near the Peak District.

They realised three ewes were entombed under the snow and had to act quickly to save them. 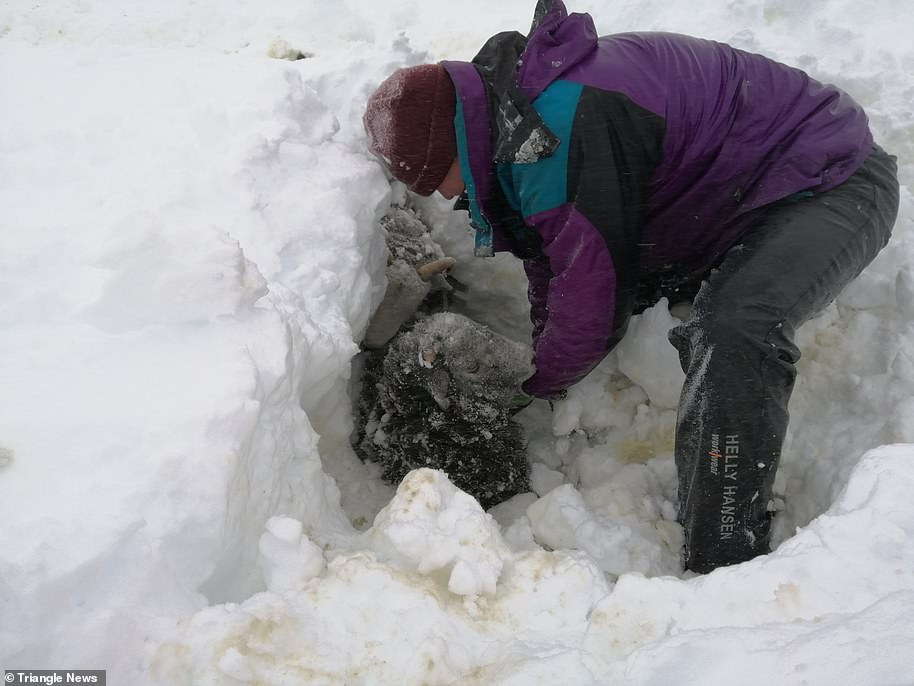 Farmers Kate and Nev Barker worked for hours to find their missing sheep on Saturday, November 27, after heavy snow hit their Staffordshire farm near to the Peak District 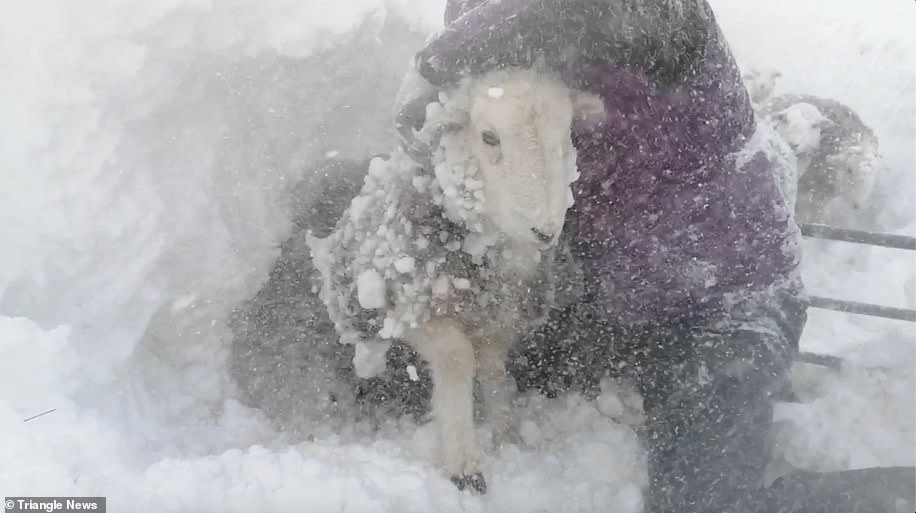 Temperatures plummeted to around 24.8F (-4C) over the weekend as a thick blanket of snow and ice smothered much of the Midlands and north-western England.

In the footage, Nev can be seen battling through the ‘brutal’ weather as he desperately digs a hole for a confused sheep to escape through.

He encourages the animal towards him, clapping and shouting: ‘Come on, come on’, but the couple’s efforts appear to be in vain as it remains slumped on the ground.

After several minutes, the ewe finally emerges. Its ice-encrusted wool indicates it had been trapped under the mountain of snow for several hours.

Kate, 49, and Nev, 48, run a smallholding near Leek, and own 50 sheep which are kept for breeding and wool.

As Storm Arwen rocked northern England at the end of last week, the pair were initially unperturbed about their flock of Herdwicks, which are renowned for being hardy.

But on Saturday morning they realised that after 10 feet of snow fell during the night, only 37 of their sheep were accounted for. 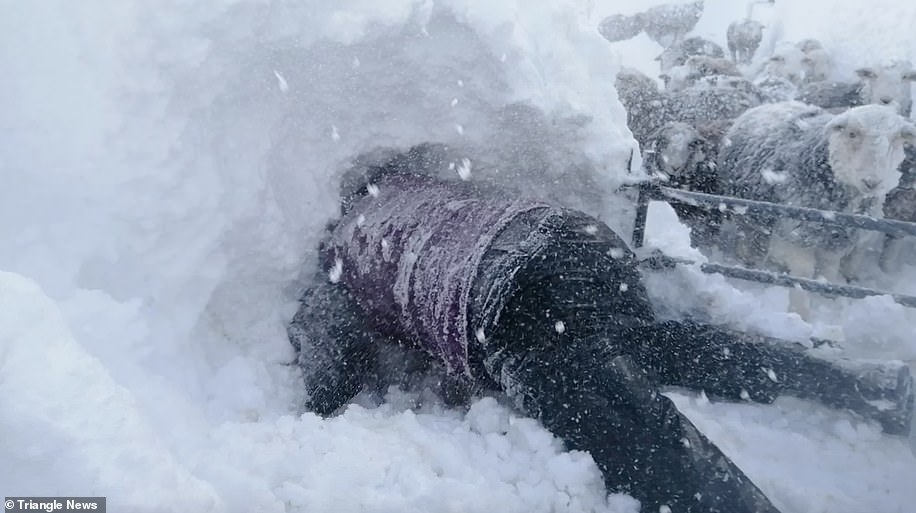 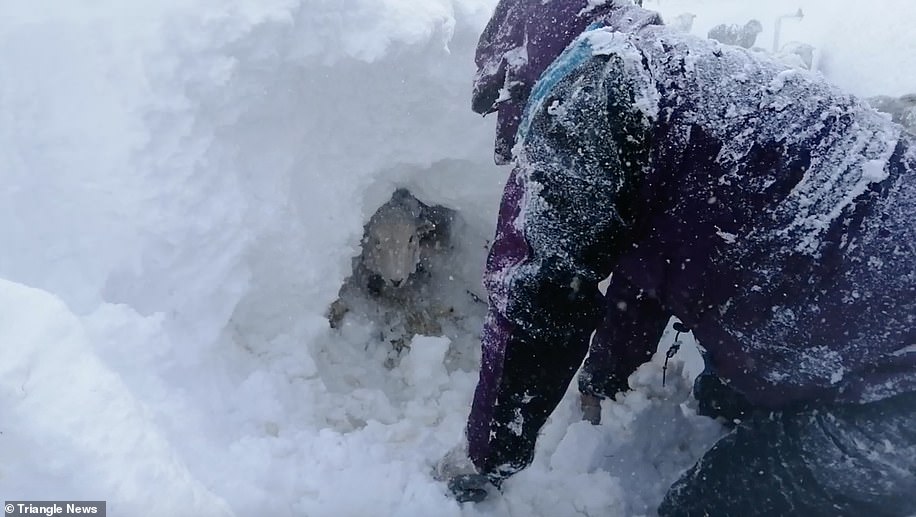 Nev calls ‘Come on, come on’ to the sheep but the couple’s efforts initially appear to be in vain 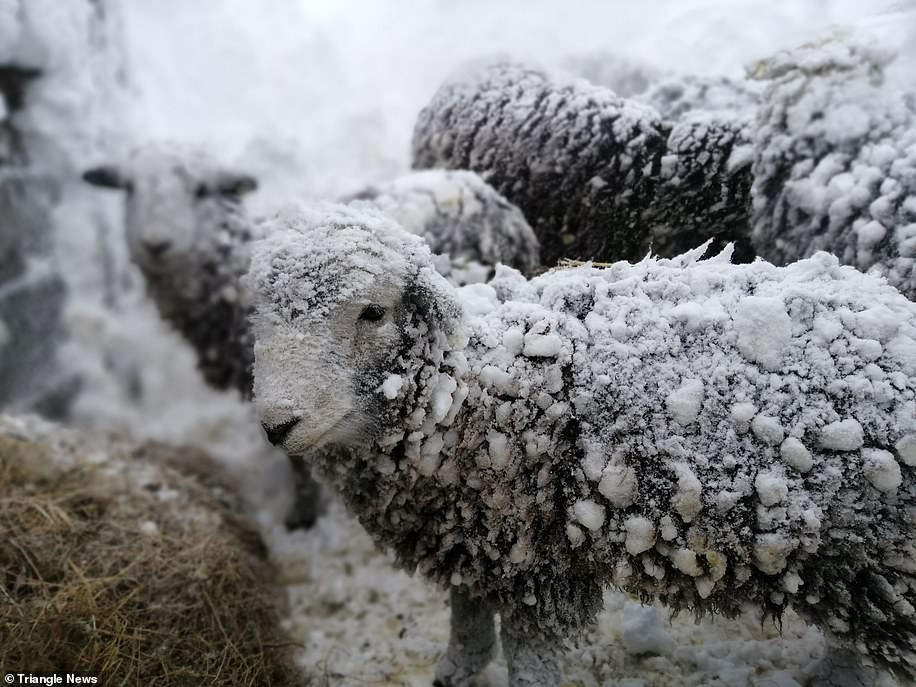 After the pair woke up on Saturday they realised that after 10 feet of snow fell during the night, only 37 of their prize four-legged possessions were accounted for

After walking around their acreage Nev and Kate became increasingly worried for the missing members of the flock.

‘The access into our fields was just thick with drifts,’ Kate said.

‘We were up to our waists, it was that deep we were just sinking. Panic set in.

‘We clambered over to the sheds and found most of them huddled there.

‘We dug the back of the shed out to gain access, so the flock could get some relief from the elements, and some hay and water. Your instinct just kicks in.’ 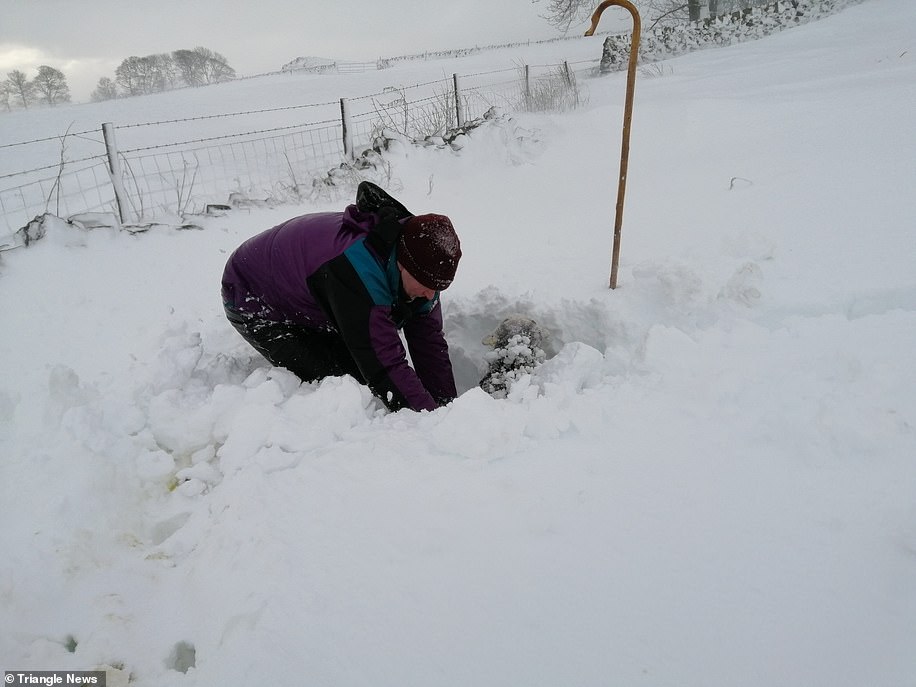 But some of the flock were still unaccounted for, so the pair used a crook to poke the larger snow drifts (above) looking for their sheep 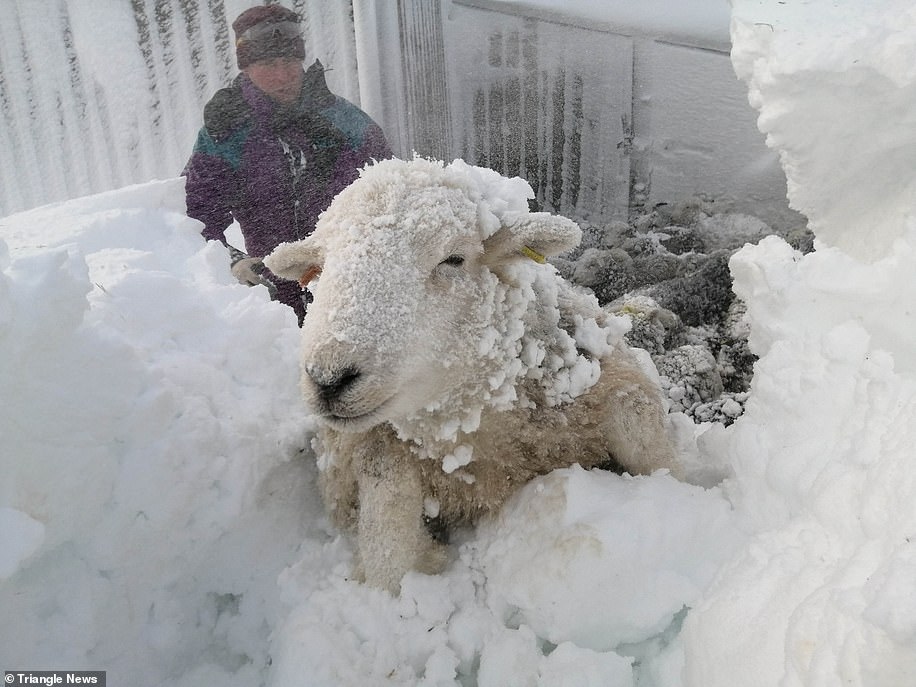 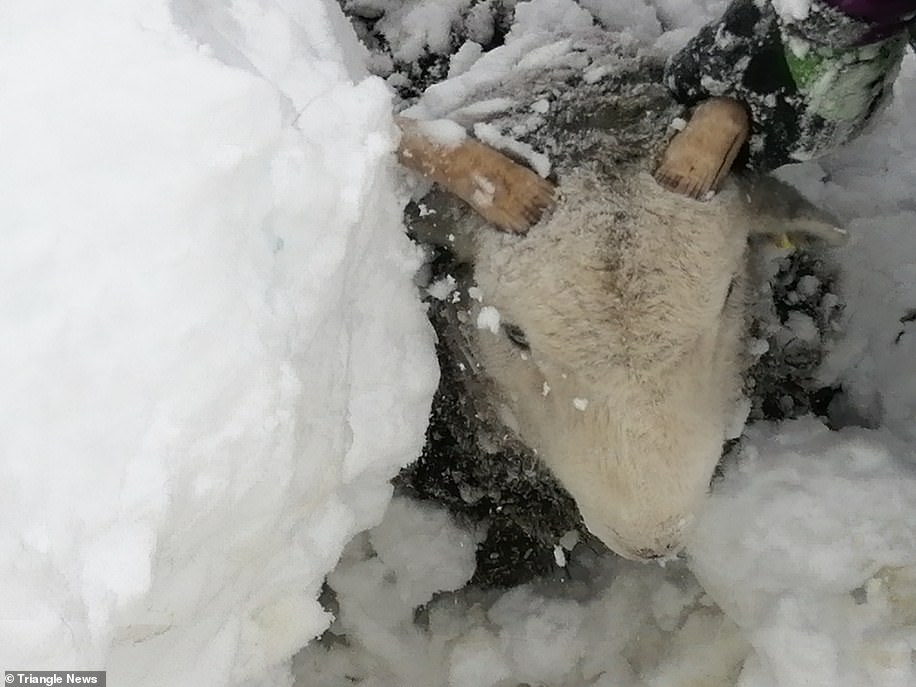 But some were still missing, so the pair used a crook to poke the larger snow drifts looking for their sheep.

They eventually found three ewes entombed in a drift that was more than 10ft high.

Video footage shows Nev digging out the first ewe with his hands, before enticing her out.

It took several minutes before she was brave enough to leave the igloo she had been stuck in.

Two further sheep were huddled behind her and all three were taken to the sheds to recuperate. Amazingly they were all unharmed. 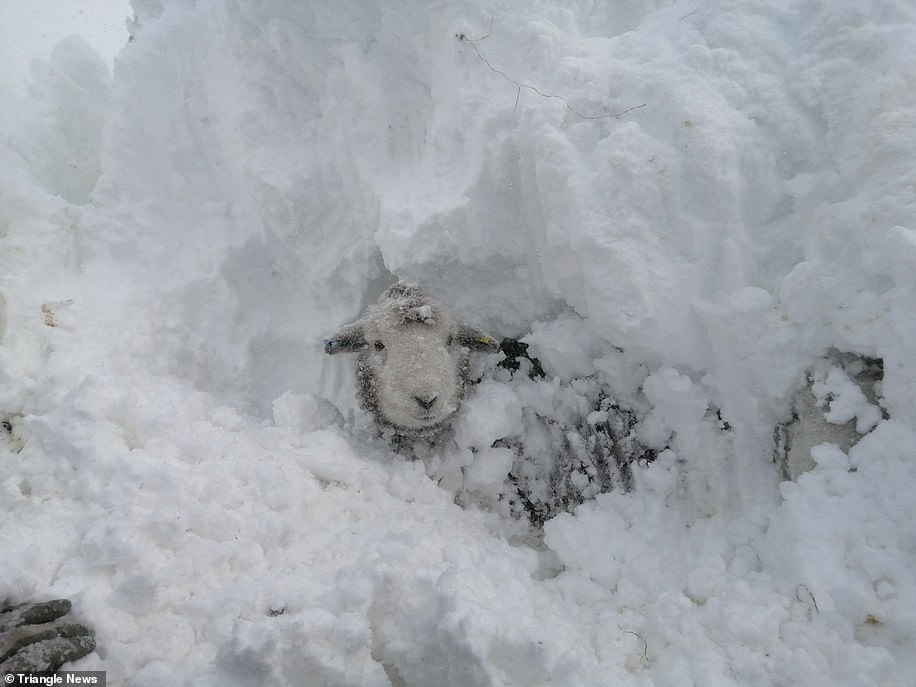 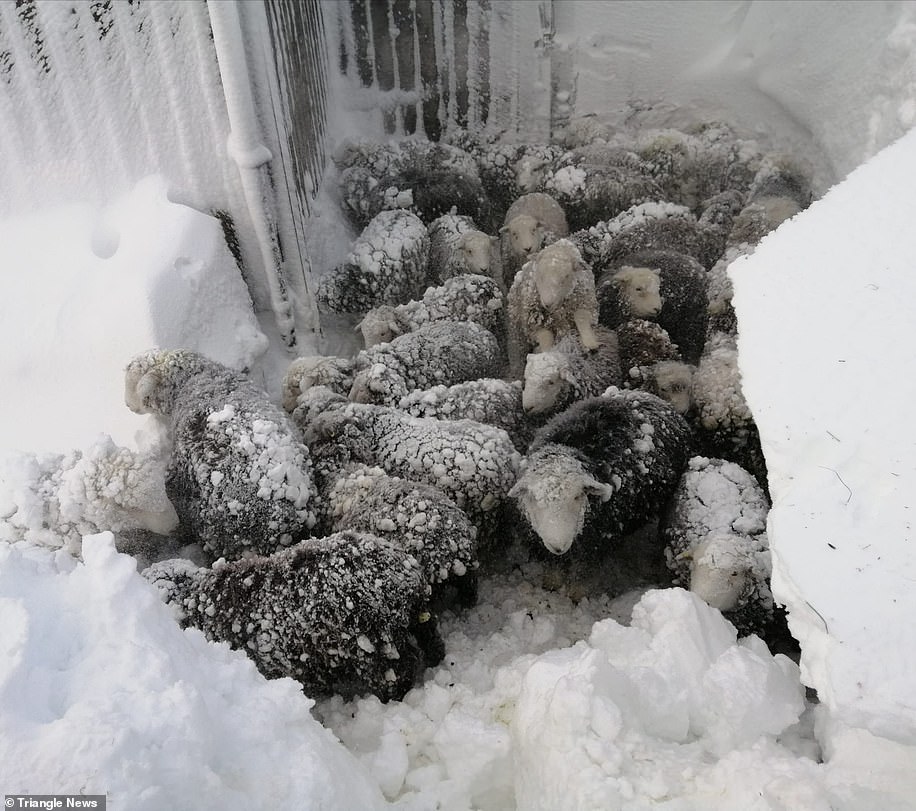 Conditions did not return to normal until Tuesday, November 30 after Storm Arwen causes 10ft high snowdrifts

Another group of rams – only visible because of their horns poking out the top of the drifts – also had to be dug from a similar situation in a different field.

Nev is a joiner while Kate was formerly a countryside ranger.

Their smallholding is on the edge of the Peak District National Park, where temperatures dropped to 24.8F (-4C) over the weekend.

Nev said they treated their sheep like members of the family – and couldn’t bear to see them stuck.

He added: ‘It’s literally like you’ve got your pet dog stuck in the snow, and all you want to do is get them out and make sure they’re ok.’

‘The conditions were brutal,’ Kate added. ‘But amazingly they’re OK and now running around the fields like nothing ever happened.’ 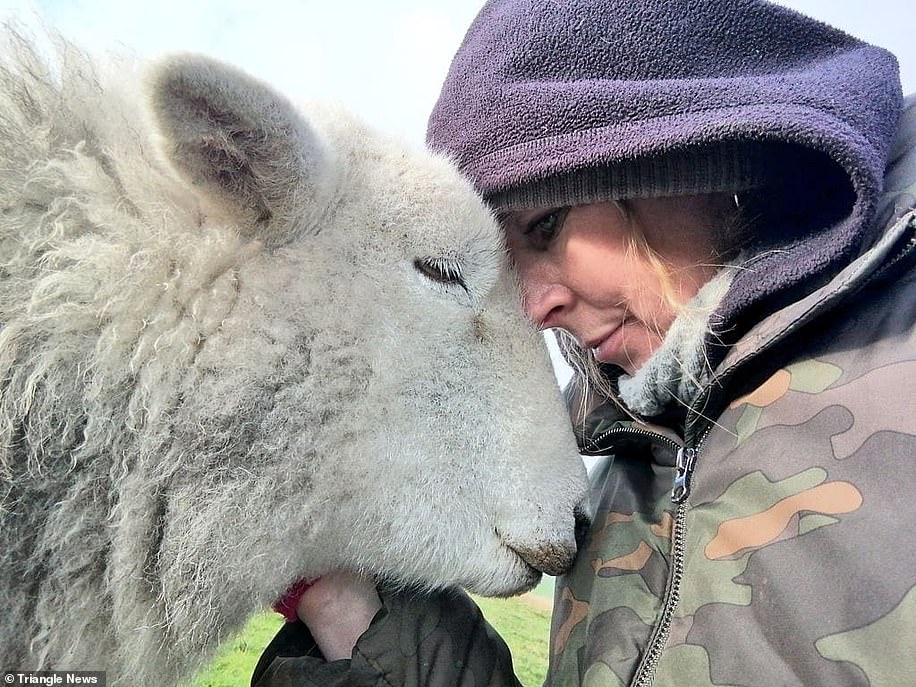 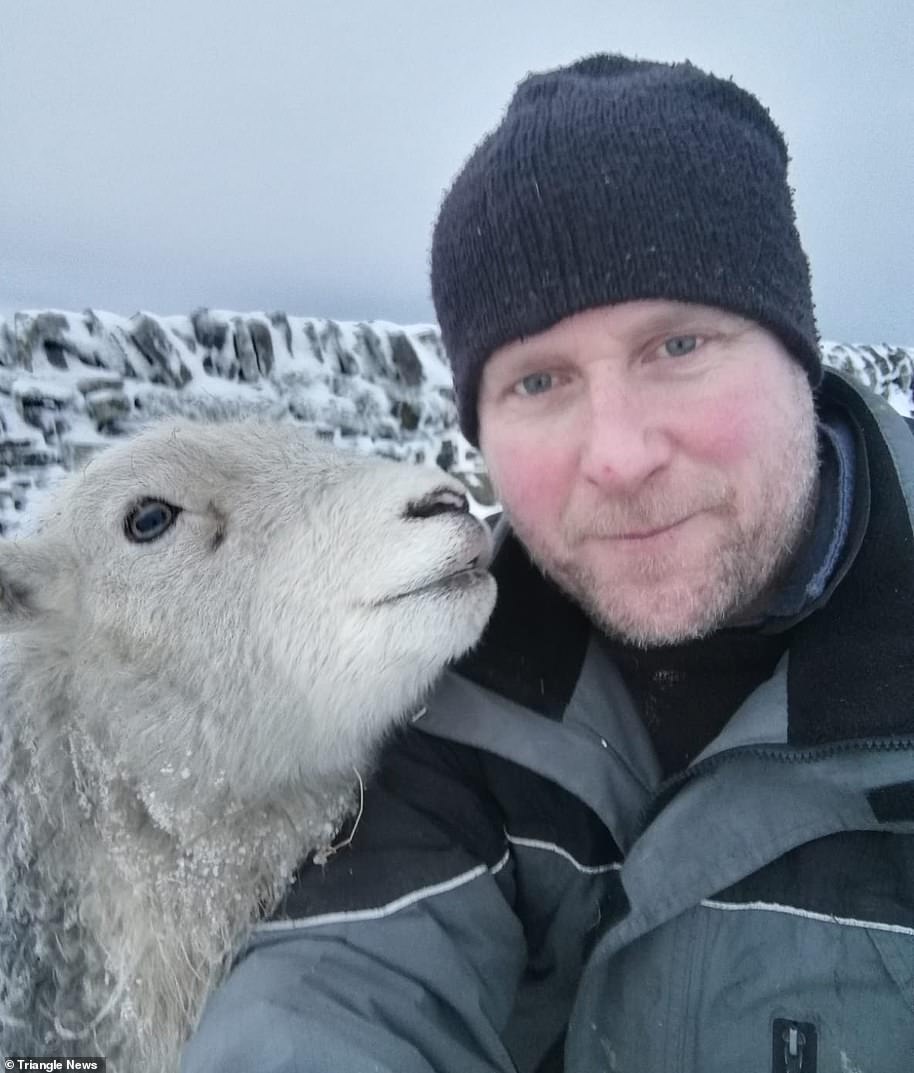 Nev Barker (pictured) works as a joiner. On Saturday, he crawled on his hands and knees to rescue sheep that had got stuck under a barrage of snow 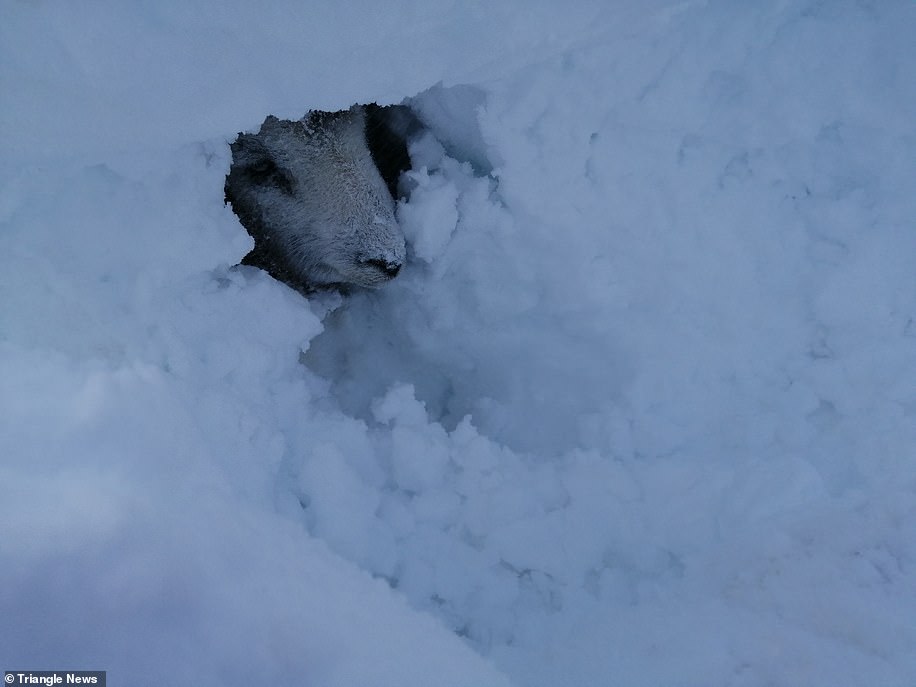 After walking around their acreage Nev and Kate became increasingly worried for the missing members of the flock. Pictured: A sheep sticks its head out from under a pile of snow