A powerful undersea earthquake has struck north of New Zealand, prompting a tsunami watch in the region.

The magnitude 7.7 quake struck off the coasts of Vanuatu and New Caledonia just after midnight on Thursday local time (1320 GMT), sparking tsunami warnings for surrounding nations.

It was centred at a depth of six miles southeast of the Loyalty Islands, about 415 kilometres (258 miles) east of Vao in New Caledonia, according to the US Geological Survey.

‘Hazardous tsunami waves from this earthquake are possible within the next three hours,’ the NWS Pacific Tsunami Warning Center said.

Smaller waves were forecast for other nations in the region including Australia, the Cook Islands and American Samoa.

The quake was not expected to cause significant damage or fatalities on land. 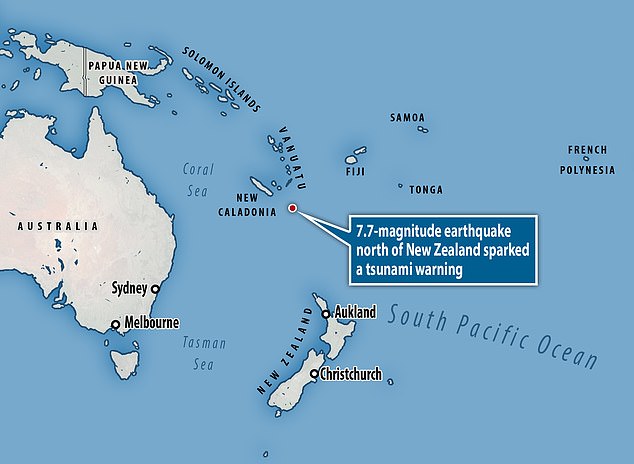 A magnitude 7.7 quake struck off the coasts of Vanuatu and New Caledonia just after midnight on Thursday local time (1320 GMT), sparking tsunami warnings for surrounding nations

There were no initial reports of casualties or damage from the quake, which was initially recorded by USGS at magnitude 7.5 before being revised to 7.7.

The region is prone to earthquakes because it sits along the Pacific ‘Ring of Fire’, a horseshoe-shaped series of seismic fault lines around the ocean.

It comes as a 6.2-magnitude earthquake struck off the coast of Indonesia’s Sumatra Island Wednesday.

The strong offshore quake hit about 217 kilometres south-southwest of the city of Bengkulu at a shallow depth of 10 kilometres at 7:52 pm local time (1252 GMT).

There was no tsunami warning or immediate reports of damage.

A further 40,000 people were directly affected by the earthquake on January 15.

Eight of the victims died when Mitra Manakarra Hospital in Mamuju partially collapsed, with 60 people being evacuated to safety in time.

Some sought refuge in the mountains, while others rushed to cramped evacuation centres, witnesses said.

Tags: 7.7-magnitude, earthquake, strik
You may also like
Celebrities News