New York: The star of Veep and Seinfeld brought some bite to her role at the Democrats' virtual convention. 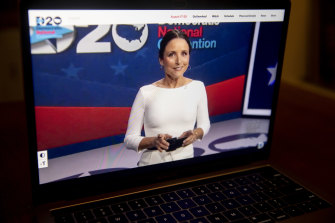 Promotion of the “30330” text address for information on Biden's campaign provided fodder for two jokes at Trump's expense. She said 30330 “would be the President's golf score if he didn't cheat.”

She also said “an easy way to remember 30330 is that's the year Donald Trump will finally release his tax returns. If we all vote, there's nothing Facebook, Fox News and Vladimir Putin can do to stop us."

Louis-Dreyfus' lines stood in contrast to an otherwise warm-and-fuzzy night where the chief goal was to establish Democratic president candidate Joe Biden as a man of character and empathy.

Louis-Dreyfus said she was so struck by Biden's warmth and kindness when he called after she received a cancer diagnosis that it made her cry.

“Our current president has made me cry, too, but it's never had anything to do with his warmth and kindness,” she said.

After a segment on Biden's faith, Louis-Dreyfus made reference to Trump's photo op holding up a Bible after demonstrators near the White House were cleared away for him.

“Joe Biden goes to church so regularly he doesn't even need tear gas or a bunch of federalised troops to help him get there,” she said.

She targeted Pence in a reference to the seeming difficulty — either intentional or not — that some Republicans have had pronouncing Democratic vice-presidential candidate Kamala Harris' first name.

“I cannot wait to see her debate our current Vice-President, Mika Pints,” she said. “Or is it Paints?”

Later, it was “Vice-President Poonce.”

Louis-Dreyfus predicted Trump would attack her on Twitter as “a washed-up, horse-face, no-talent has-been with low ratings.”

“Well, with all due respect, sir, it takes one to know one,” she said.

Not everyone was laughing.

“Remember when Julia Louis-Dreyfus used to be funny?” tweeted the conservative website The Daily Caller.

Tags: 30330, Golf, President's, sc, the
You may also like
Celebrities News