Fears have been raised for 142 Britons on board the Grand Princess cruise ship after 21 people were diagnosed with coronavirus.

Vice President Mike Pence, who is in charge of the US response to the crisis, revealed that 19 crew members and two passengers had the virus on Friday.

President Trump subsequently raised the prospect that all 3,500 passengers and crew could now be quarantined on board – despite a failed quarantine on board the Diamond Princess last month which sickened 700 people and led to six deaths. 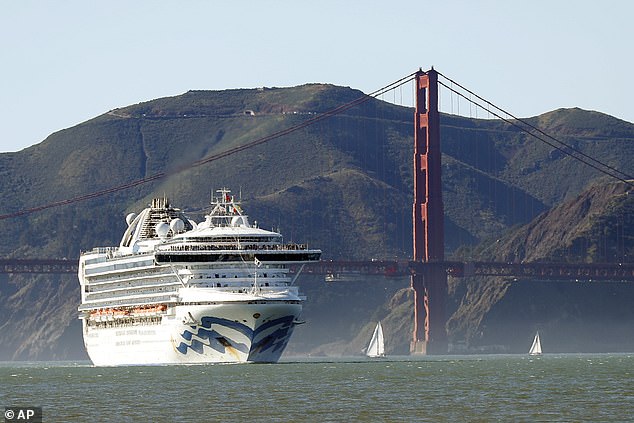 The Grand Princess cruise ship passes the Golden Gate Bridge as it arrives from Hawaii in San Francisco. Twenty-one people on board have tested positive foe the coronavirus 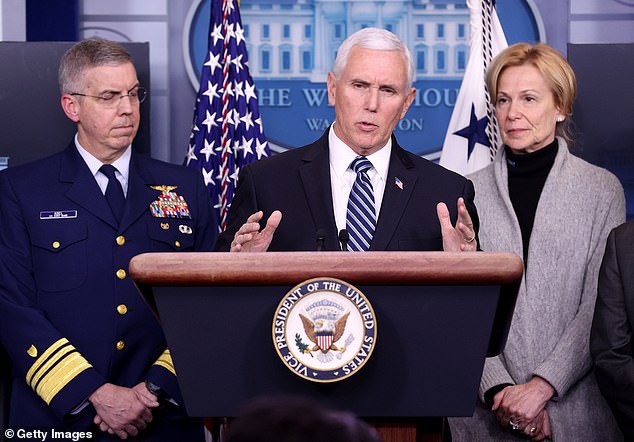 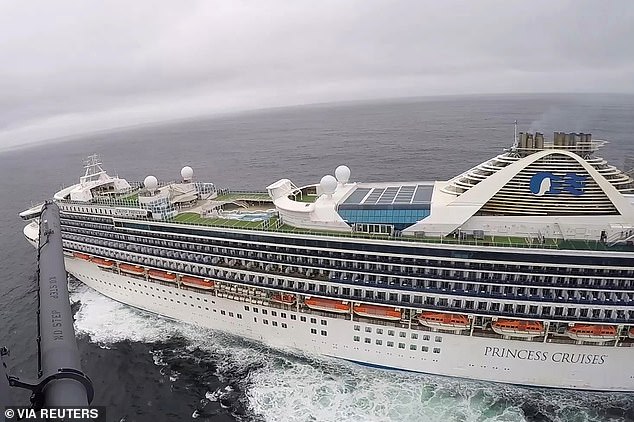 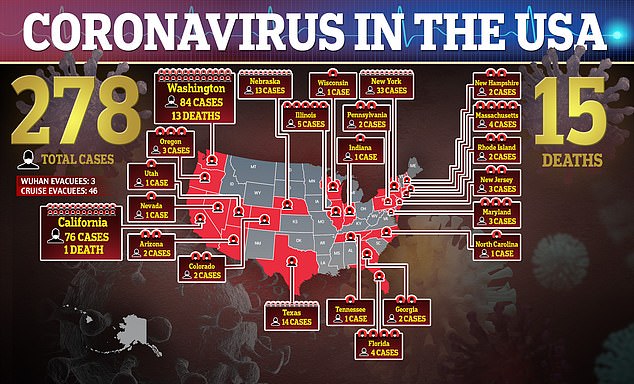 Horrified passengers only learned that nineteen crew members and two tourists aboard Grand Princess cruise ship had tested positive for coronavirus when Mike Pence announced the cases at his press conference.

Forty-six people on board were swabbed and 21 of them tested positive, Vice President Mike Pence revealed in a White House press conference Friday.

The ship has been kept in a holding pattern in the Pacific Ocean off San Francisco for nearly two days and will now move on to a ‘non commercial port’ where the all the passengers and crew will be unloaded and tested.

Friday’s test results come amid evidence the vessel was the breeding ground for a deadly cluster of at least ten cases during its previous voyage.

The news came as a shock for many passengers who only found out about the positive test results from Pence’s press briefing, a passenger told CNN via video call.

‘We apologize but we were not given advance notice of this announcement by the US federal government,’ the ship’s announcement broadcast was heard in the video. ‘It would have been our preference to be the first to make this news available to you.’

The Grand Princess cruise ship ,with some 3,500 people on board, will not dock in San Francisco and was ordered to stay at sea on Wednesday evening after several dozen people on board began to show symptoms.

Pence said the federal government is working with California officials on a plan to bring the ship to a non-commercial port this weekend and the 2,300 passengers, mostly Americans, and another 1,000 crew members, will be tested for the virus.

‘We have been in discussion with Gov. (Gavin) Newsom,’ Pence said.

Federal officials have been working with the state and ‘we have developed a plan to bring the ship to a non-commercial port,’ he added.

‘All passengers and crew will be tested for the virus. Those that will need to be quarantined will be quarantined. Those who will require medical help will receive it.’

‘The general risk to the American public remains low,’ Pence said but added that elderly Americans and those with pre-existing conditions should use caution, especially when traveling.

Confined to their cabins, passengers aboard a mammoth cruise ship off the California coast awaited coronavirus test results Friday amid evidence the vessel was the breeding ground for a deadly cluster of at least 10 cases during its previous voyage.

On Thursday, a military helicopter crew lowered test kits onto the 951-foot (290-meter) Grand Princess by rope and later retrieved them for analysis as the vessel waited off San Francisco, under orders to keep its distance from shore.

Princess Cruises said 46 of the more than 3,500 people on board were tested and results revealed Friday that 21 of them tested positive.

Twenty-four others tested negative while one test was inconclusive.

On Friday, President Trump claimed that he would prefer the passengers and crew to remain on the ship so they don’t add to the rising American cases.

‘I have great experts, including our vice president, who’s working 24 hours a day on this stuff,’ Trump told reporters.

‘I don’t need to have the numbers double because of one ship that wasn’t our fault. And it wasn’t the fault of the people on the ship either.

‘I can live either way with it,’ he continued.

‘I’d rather have them stay on, personally. But I fully understand if they want to take them off. I gave them the authority to make the decision’ 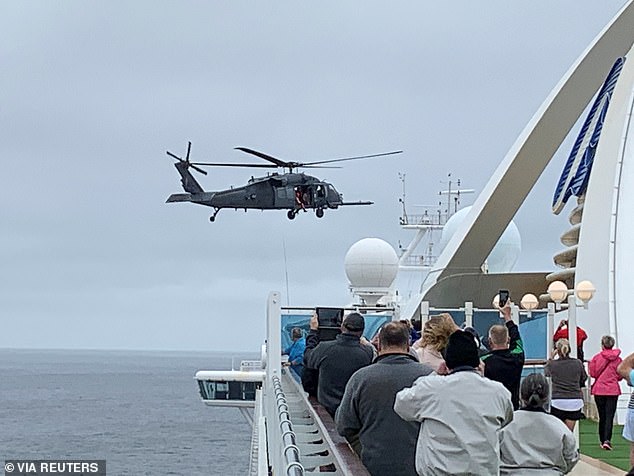 Passengers on board the Grand Princess cruise ship, which had previously carried two passengers who contracted the coronavirus, watch while a U.S. military helicopter hovers 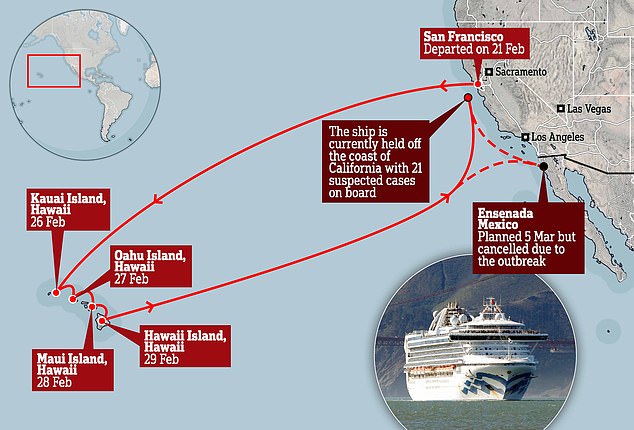 The Grand Princess is currently 400 miles off San Francisco and heading for port having returned from Hawaii after 11 passengers and 10 crew reported symptoms of coronavirus. Tests for 21 people on board, including 19 crew and two passengers, have tested positive

The testing began after it was reported that a passenger on a previous voyage of the ship, in February, died of the disease.

In the past few days, health authorities disclosed that at least nine other people who were on the same journey were also found to be infected. And some passengers on that trip stayed aboard for the current voyage.

The only people tested were those who were showing symptoms or who had been on the previous trip.

‘The ship will not come on shore until we appropriately assess the passengers,’ California Gov. Gavin Newsom said Thursday.

The ship off California was returning to San Francisco after visiting Hawaii.

A Sacramento-area man who sailed aboard the Grand Princess last month during a visit to a series of Mexican ports later succumbed to the coronavirus, according to California authorities.

Others who were on that voyage have also tested positive, with seven cases in Northern California and two in Canada, authorities said.

However, Mexico’s top epidemiologist denied that the passenger who died in California was on a ship that visited Mexican ports. Dr. José Luis Alomía Zegarra said the man was on a different cruise that did not stop in Mexico. 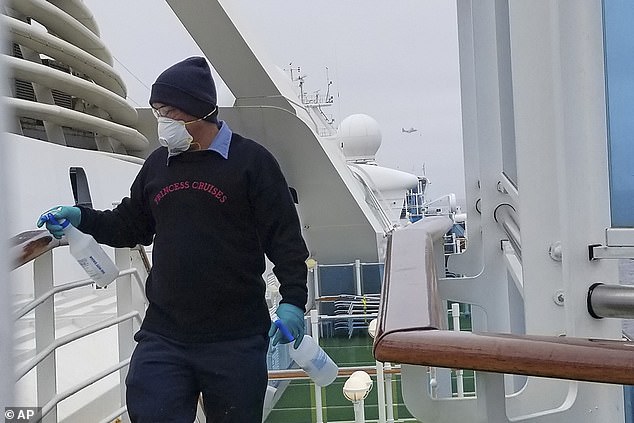 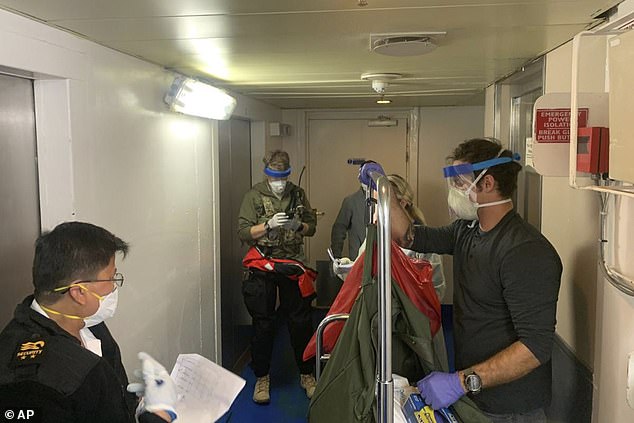 A group of medical personnel with the 129th Rescue Wing, working alongside individuals from the Centers for Disease Control and Prevention, don protective equipment after delivering virus testing kits to the Grand Princess cruise ship off the coast of California

Three dozen passengers on the Grand Princess have had flu-like symptoms over the past two weeks or so, said Mary Ellen Carroll, executive director of San Francisco’s Department of Emergency Management.

An epidemiologist who studies the spread of virus particles said the recirculated air from a cruise ship’s ventilation system, plus the close quarters and communal settings, make passengers vulnerable to infectious diseases.

‘They´re not designed as quarantine facilities, to put it mildly,’ said Don Milton of the University of Maryland.

‘You´re going to amplify the infection by keeping people on the boat.

‘My advice is to get people off and into a safer quarantine environment than a cruise ship,’ Milton said.

Michele Smith, a Grand Princess passenger, posted video on Facebook of the helicopter that arrived at the ship. Another video showed a crew member wearing gloves and a mask and spraying and wiping a handrail.

‘We have crews constantly cleaning our ship,’ Smith was heard saying.

In a post, Smith said she and her husband were not quarantined and were told that only the people who had been on the Mexico voyage or those showing flu-like symptoms had to isolate themselves.

‘Spirits are as high as can be under these circumstances. We are blessed to be healthy, comfortable and well-fed,’ she wrote.

Meanwhile, the U.S. death toll from the coronavirus climbed to 15, with all but one victim in Washington state, while the number of infections swelled to over 200, scattered across about half the states.

President Donald Trump has signed an $8.3 billion measure to help public health agencies deal with crisis and spur development of vaccines and treatments.

Worldwide, the virus has infected more than 100,000 people and killed over 3,400, the vast majority of them in China. Most cases have been mild, and more than half of those infected have recovered.

WHAT YOU NEED TO KNOW ABOUT BEING TESTED FOR CORONAVIRUS

On Tuesday, Vice President Mike Pence announced that any American can be tested for coronavirus as long as a doctor approves it.

The move appears to expand upon previous criteria needed for testing by the Centers for Disease Control and Prevention (CDC).

But how do you determine if you have symptoms of COVID-19 and when you should see a doctor?

We break down everything you need to know about being tested for the virus that has infected more than 120 Americans and killed at least nine.

WHAT ARE THE LATEST GUIDELINES FOR BEING TESTED?

There are three groups of people that the CDC recommends get tested.

1. People with symptoms such as fever, cough or shortness of breath who have been in ‘close contact’ with someone confirmed to have coronavirus

2. Patients with symptoms who have traveled to areas affected by the virus within the last 14 days

3. Those with symptoms who need to be hospitalized and no other cause for their illness is found. They don’t need to have a travel history or exposure to another patient

HOW DOES THIS DIFFER FROM THE PREVIOUS CRITERIA?

When the CDC first began testing, only those with a travel history to China – where the outbreak emerged – or those who had been exposed to a confirmed coronavirus patient were tested.

However, the agency says its criteria for testing is always ‘subject to change as additional information becomes available.’

WHAT TO DO IF YOU NEED A TEST?

Health officials strongly advise that anyone who believes they may be infected not show up unannounced at their doctor’s office in case they expose others to the highly-contagious disease.

Instead, the CDC suggests immediately calling your physician or healthcare provider.

‘Your healthcare professional will work with your state’s public health department and CDC to determine if you need to be tested for COVID-19,’ the CDC’s website states.

If you are suspected of having the virus, you will most likely get tested at a hospital.

The test involves getting a swab of the patient’s nostril and throat. If the patient has a wet cough, a sample of sputum (a mixture of saliva and mucus) will also be collected.

WHY HAS IT BEEN DIFFICULT FOR PEOPLE TO GET TESTED?

There have been multiple reports of people not having accessing to get tested.

The first batch of test kits that the CDC sent to state and local health departments were faulty, which led to a delay.

Secondly, the CDC had strict criteria for testing, which led to missed diagnoses of people who caught the virus from so-called ‘community spread,’ meaning it’s unknown how they were infected.

A third reason is that some health departments did not leave the decision to test up to doctors as the CDC suggested.

For instance, the Massachusetts Department of Public Health initially required doctors to call a hotline to determine if their patients met CDC criteria for testing.

Then, before the test could be administered, it had to be authorized at the State Public Health Lab.

WILL IT BE EASIER TO GET TESTED NOW?

Since the CDC’s testing fiasco, several health departments have either received new kits from the federal agency or made their own.

Additionally, the US Food and Drug Administration expanded its Emergency Use Authorization (EUA) policy so allow more labs can apply for approval to test for the virus.

The CDC that 75,000 test kits are currently available and more are being manufactured.

FDA Commissioner Dr Stephen Han told reporters on Monday that close to one million people would be tested by the end of the week.

But figures from the Association of Public Health Laboratories show that likely no more than 100,000 people would be tested by week’s end.

Tags: 21, cases, Coronavirus, found, on
You may also like
Celebrities News