Saturday Night Live has been on a bit of a hot streak over the past year or so. After Eddie Murphy’s triumphant return in December 2019, the show gracefully tackled the coronavirus (COVID-19) pandemic with three at-home shows. Now Saturday Night Live has wrapped its final show of 2020, when can fans expect to hear “live from New York, it’s Saturday night” in 2021? 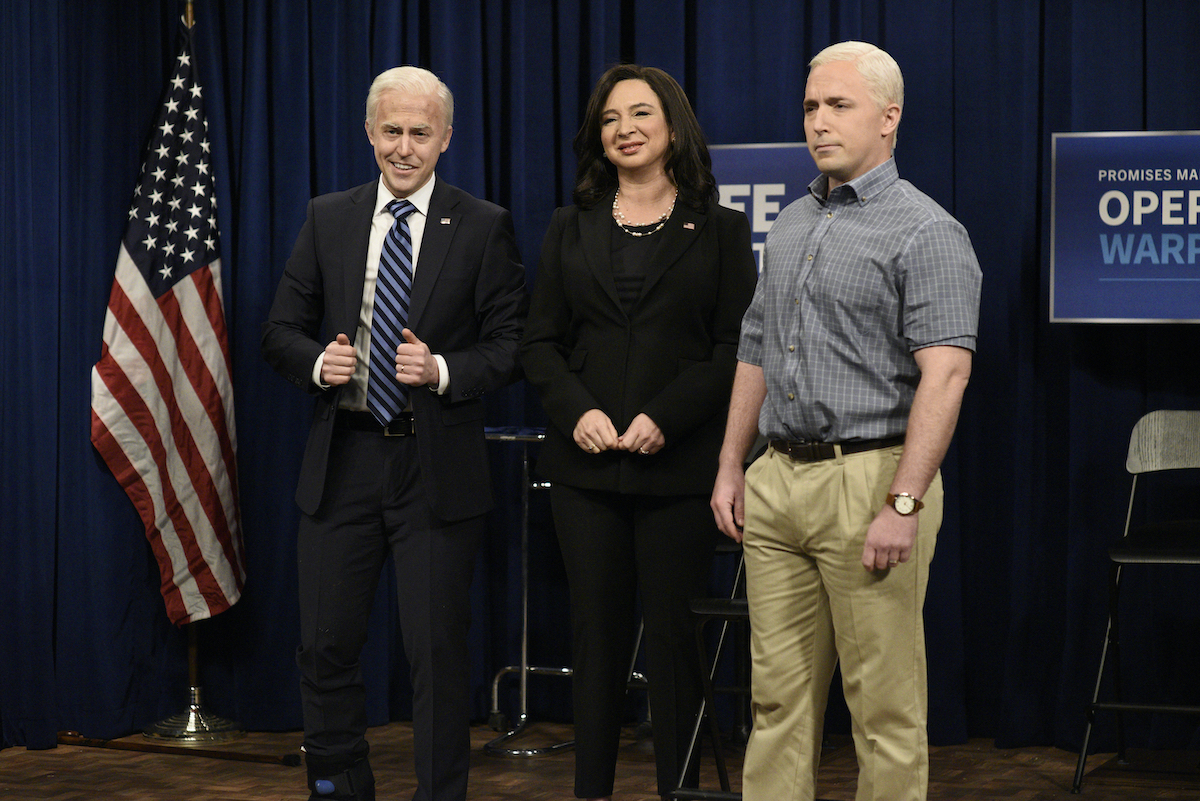 Saturday Night Live concluded the first half of season 46 with host Kristen Wiig and musical guest Dua Lipa. For fans, Wiig’s return to the show that made her a star was certainly highly anticipated. While it’s debatable whether it met expectations, the mid-season finale did answer one question. Going in, Jim Carrey confirmed he completed his run as Joe Biden.

And rather than leave viewers wondering who would play the president-elect in 2021, SNL revealed the answer upfront. As it turns out, cast member Alex Moffat — who joined the show in 2016 — has been tapped to play Biden as his presidency begins. Of course, there’s no clear indication just yet when SNL fans will be able to catch Moffat’s Biden next. Or is there?

During the episode’s “Weekend Update” segment, hosts Colin Jost and Michael Che routinely take on the latest political news. After all, the Donald Trump administration has given SNL a much-needed boost these past few years. But as Jost announced during the segment, “barring a reverse Christmas miracle, this is the last ‘Weekend Update’ with [Trump] still in office.”

Biden’s inauguration is set to take place on Jan. 20, 2021. So by that rationale, the following Saturday, Jan. 23, 2021, could indeed be the date in which SNL season 46 resumes. Moffat’s Biden could easily be a cold open waiting to happen, as the series ushers in a new political era. Although NBC hasn’t confirmed this, fans can likely count on it, as it fits with previous seasons.

Of course, since Trump’s administration has been a ratings-getter for SNL, the question remains how it will make the most of a Biden administration. During Biden’s time as vice president, then -cast member Jason Sudeikis did a fine job playing him. But since his departure from the show, three other men have either failed to lock into a longtime gig or earned mixed reviews.

In particular, Carrey’s six-week run as Biden on SNL proved to be divisive. For as big a star as Carrey is, critics felt the actor didn’t have a very strong interpretation of his Biden. Carrey reportedly lobbied for the part. But many felt he merely rehashed material from his In Living Color days. Here’s hoping Moffat makes Biden his own when SNL Season 46 returns in 2021.