Ahead of Friday’s premiere of the Apple TV+ musical series, Schmigadoon!, ET has an exclusive sneak peek of guest star Martin Short appearing as a leprechaun and explaining the rules of the titular magical town to recent arrivals Melissa (Cecily Strong) and Josh (Keegan-Michael Key).

After going on a misguided backpacking trip to fix their relationship, the couple stumbles upon the little town full of singing people. And while initially delighted by the song and dance upon their arrival, they soon learn that leaving isn’t as simple as crossing back over the bridge from which they came.

As Short’s character explains, or rather sings, “Once he has entered Schmigadoon, it’s true that he won’t be leaving soon. Within borders he are bound until, at last, true love is found. But till he finds it, he must stay, where life’s a musical everyday.”

That’s right, they’re stuck in a parody of the Golden Age of musicals, with the series paying homage to several of Rodgers and Hammerstein’s productions, including Carousel, Oklahoma! and The Sound of Music.

Meanwhile, Short is just one of many A-list stars to appear in the first six episodes. 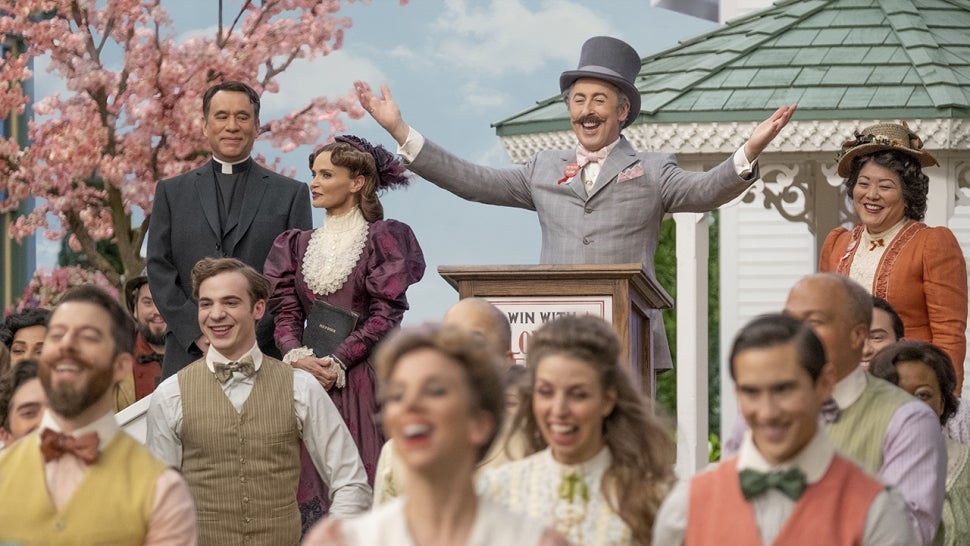 When asked about her “amazing” co-stars, Strong told ET it was “so funny watching Kristin play this type of character — [a villainous, conservative townsperson] — because it’s very not Kristin. So it was just a Masterclass.”

Tveit, who counts Carousel as one of his favorite musicals, said the cast creators Cinco Paul and Ken Daurio managed to assemble “was really incredible.”

“It was just like all the way down the line, they got all these people to kind of all come together and make this musical,” the actor noted. “You never get to work with that many of that level of talent on a musical usually. So this is really really special.”

Cameron, who is starring in her first major series after breaking out with Disney’s Descendants franchise, couldn’t believe all the names added to the cast.

“I was like, ‘What’s happening? How did we get all of these people in one place?’ Because of the project, obviously. It’s so amazing,” she recalled, gushing that being on set was a joy. “We’re all dancing, we’re making each other laugh. It was exactly like playing in paradise.”