Katie Holmes’ romance with Emilio Vitolo Jr. fizzled out in April (via Us Weekly), and fans of the “Pieces of April” actor are eager to see who she dates next. From the beginning of her career, there’s been a spotlight on Holmes’ love life. When she landed the role of Joey Potter in “Dawson’s Creek,” she also met the guy she would describe as her “first love” during a 1998 Rolling Stone interview.

Holmes didn’t come right out and say that she was talking about co-star Joshua Jackson, but it was pretty obvious that “The Mighty Ducks” actor meant a lot to her. “He’s been in the business so long, and he’s really helped me,” she said. Holmes moved on and got engaged to “American Pie” star Chris Klein in 2003, but they never made it to the altar, per People. A little over a year after they ended their engagement in 2005, she wed another experienced actor. Who could forget Tom Cruise shocking Oprah and becoming an enduring internet meme by jumping on a couch to demonstrate the intensity of his love for Holmes?

But by 2012, their marriage made in tabloid heaven was over. Holmes then made a surprising move by dating Cruise’s “Collateral” co-star Jamie Foxx. The couple kept their six-year relationship mostly under the radar before it ended in 2019, and now fans want to see Holmes with someone else who worked with Foxx. 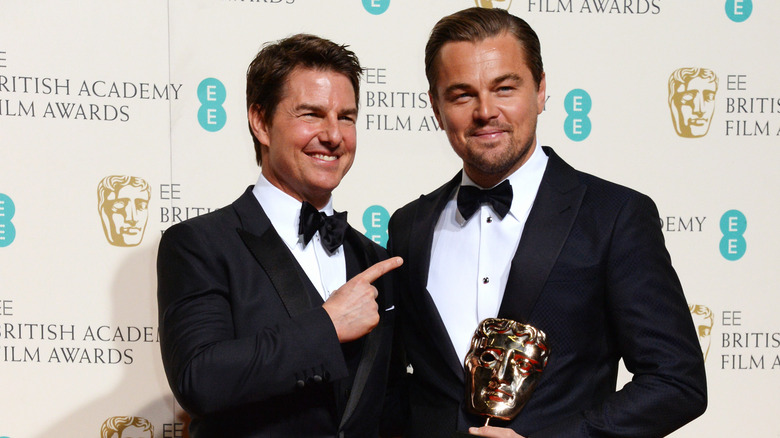 Nicki Swift conducted a poll of 643 people in the U.S. to see who they think Katie Holmes should date next, and they believe her best suitor would be Oscar winner Leonardo DiCaprio. The “Titanic” star sank the competition with 35.15% of the vote. He beat out Brad Pitt, who received 27.22% of the total vote. Lenny Kravitz came in next with 15.09%, followed by Drake with 14.15%. Common finished last with a share of 8.40%.

Holmes and DiCaprio have actually hung out before. According to Entertainment Tonight, they sat together at Jamie Foxx’s 50th birthday party in 2017. But while Foxx’s “DJango Unchained” co-star and Holmes would make one powerful Hollywood pairing, DiCaprio has been dating “Mickey and the Bear” star Camila Morrone for the last three years. Like many of DiCaprio’s past romantic partners, Morrone is a model and is significantly younger than him. However, she told The Los Angeles Times that the 23-year age difference doesn’t bother her. “I just think anyone should be able to date who they want to date,” she said.

Fans have come to expect DiCaprio’s relationships with the likes of Gisele Bündchen, Bar Refaeli, and Nina Agdal to fizzle out, but an insider told E! News that he and Morrone are “serious” and have settled into a “domestic life.” In other words, he probably won’t be looking for a new leading lady anytime soon.

Tags: fans, Ho, Is, Katie, this, Want, who
You may also like
Celebrities News