Stacey Solomon and Joe Swash are two of the many stars who fans think could be contestants on the second season of The Masked Singer, which is currently airing on ITV. Today, the pair joined Loose Women for their first interview since announcing their engagement over the festive season but as anticipation heightens ahead of Saturday’s third instalment of the singing contest, it seems one or both of the duo could be one of the next to be unmasked after they didn’t quite manage to play down the possibility.

So far, Spice Girls star Mel B and pop sensation Sophie Ellis-Bextor have both been unmasked as Seahorse and Alien respectively.

Fans were stunned to see the iconic singers on the show and it seems the line-up is even bigger and better than season one provided.

With 10 contestants still remaining, fans are trying to search for clues which may lead them to work out who is behind each costume.

On Thursday lunchtime’s edition of Loose Women, two friends of the show were given the chance to address rumours they were part of the cast. 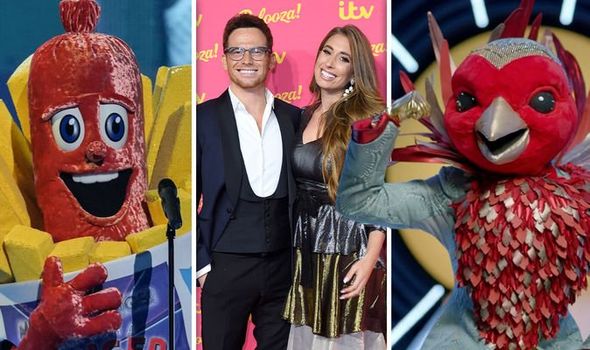 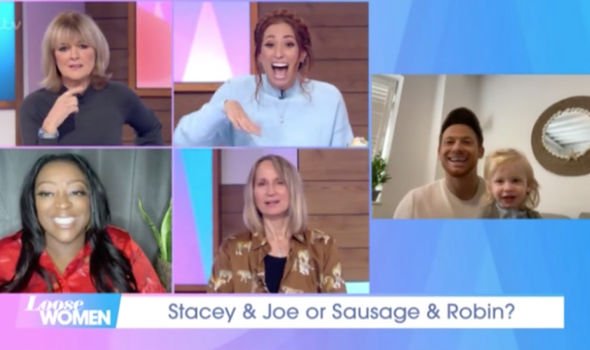 After opening up about their engagement, Jane Moore couldn’t help but ask them about the show.

She quizzed: “Obviously the Masked Singer is on telly at the moment, a huge show, are we seeing a Sausage and a Robin going down the aisle?”

And Joe, who joined from the pair’s home, joked: “Well, I’ve been told I’m a Bushbaby, I’m a Blob, the other day I was a Robin. 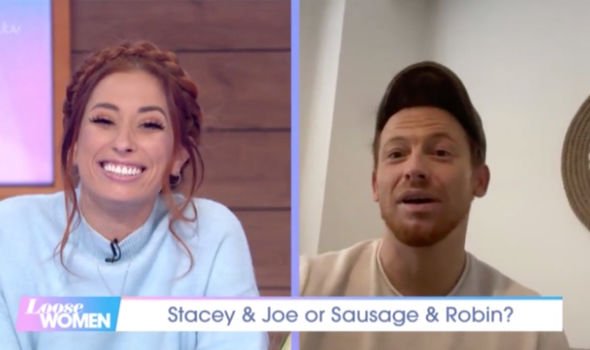 “I can’t sing or dance ladies!” He insisted before a clip was played of Robin’s first performance.

But with Joe another face who fans think might well be hiding behind the mask, could he be playing down his involvement?

The attention soon turned to Stacey, with Jane commenting: “So that’s who they think is Joe, now let’s have a quick look at Sausage.”

“That’s not you, is it?” Jane probed, with Stacey quick to downplay the speculation: “I wish!”

“It looks like you but it isn’t you.” co-star Carol McGiffin said, but Stacey was left confused by the remark, laughing: “It looks like me? A giant hotdog?”

Joe fuelled the rumour mill once more, adding: “To be fair, the Sparrow has got some good moves!

“So I could be the Sparrow, to be fair,” Joe said – seemingly referring to the Robin.

Could one – or both – halves of the much-loved couple be unmasked in the weeks to come after refusing to deny their involvement?

Aston remains the favourite to be unmasked as Robin, with bookmakers Ladbrokes placing him at 4/7 odds.

Jessica O’Reilly of Ladbrokes said: “Aston’s only got one shot to win The Masked Singer, but the odds suggest his recognisable voice and ability to hit the high notes is going to see him unmasked next.”

She added: “The rest of the competition looks fairly wide open, bar the exception of Lenny Henry as the Blob, and punters could be kept guessing for a long time yet over the likes of Swan, Sausage and Grandfather Clock.”

The Masked Singer airs Saturdays at 7pm on ITV.

Tags: entertainment, the masked si, TV
You may also like
Celebrities News