On the CBS comedy “Ghosts,” young couple Samantha (Rose McIver) and Joe (Utkarsh Ambudkar) inherit a decaying country estate and decide to convert it into a bed and breakfast — the only problem is that it’s inhabited by the spirits of all the people who have died on the property over the past several centuries. The eclectic group of ghosts includes a Prohibition-era crooner (Danielle Pinnock), a 1700s militiaman (Brandon Scott Jones), a ‘60s flower child (Sheila Carrasco), a ‘90s yuppie (Asher Grodman), a sarcastic Lenape tribesman from the 1500s (Román Zaragoza), and others who provided a wealth of opportunities for Heather Pain, who costume designed the series pilot.

They also provided major challenges, given that each character — like their counterparts in the show’s British predecessor — would be wearing whatever costume Pain conceived for them for the duration of the series. “I had to ask myself, ‘How do you create characters that are going to stand up over time?’” Pain told IndieWire. “You have to tell the story, but you’re also thinking ahead in terms of the different scenarios the writers might come up with later. What if the characters go outside? How can we replicate the costumes if they have stunts?”

Pain’s first step was rigorous research, as showrunners Joe Port and Joe Wiseman wanted each character to be faithful to their time period. For Carrasco’s and Pinnock’s characters, respectively, that meant turning to inspirations like Janis Joplin and Bessie Smith. “I looked at what they wore and tried to figure out what it was about their clothes that would stick in somebody’s mind, and then I approached my characters that way,” Pain said. “What would be iconic for this person?” In the case of Pinnock’s Alberta, that meant pearls, feathers, and dazzling colors; as the aptly named Flower, Carrasco is dressed in a macramé top, peasant skirt, and tinted glasses.

For many of the ghosts Pain had photographic reference points, but for characters whose deaths were further in the past, she had to work to maintain authenticity. “Obviously there were no cameras around in the time of the Lenape character [Sasappis],” Pain said, “so I had to really dig deep. I contacted a couple different tribes in Oklahoma to ask them questions, I read a plethora of books, and I talked to Jacqueline West, who designed the costumes for ‘The New World.’ It was challenging creating that character for television, because everything had to be natural fabric — there were no wovens back in that time — and sometimes they wore very little clothing.” 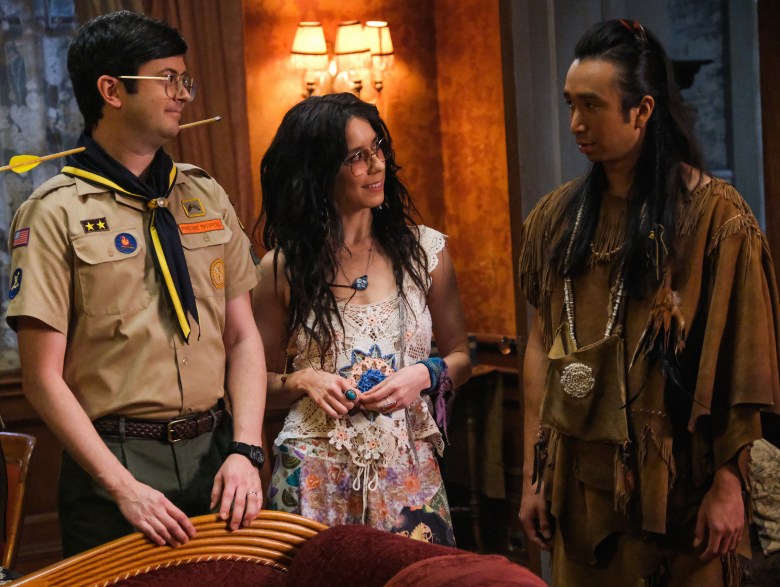 Because so many scenes in “Ghosts” revolve around ensemble scenes with the spirits, Pain had to be careful to not only design costumes that were right for each character but that worked in conjunction with each other on screen no matter who was in the frame. “Whenever I begin work on a costume, I always look at the production design,” she said. “What is the setting? Where are they going to be? In this case the house was really traditional with dark wood and deep earth tones.” That meant Pain could use certain colors to make characters like Hetty, the lady of the manor, pop against her surroundings. “Hetty was in teal, and then it was important to me to bookend that with Alberta and make her really strong as well. I came to her color by playing off of Hetty’s costume, and then I wanted Flower’s dress to be a pattern with colors that tied everyone together.”

The show’s leads, Samantha and Joe, required a more conventional contemporary approach, but Pain was no less rigorous in her thought process regarding these characters than she was with their deceased roommates. For Joe, her starting point was his career as a chef. “When you look at people in general, I often feel that whatever their profession is has a standard look,” Pain said. “A banker is going to dress different than a florist… it’s almost like everyone has a sort of uniform. So for Joe, I looked at different chefs and what they wore and tried to give him clothes that would make him seem more casual and at ease.” Pain added that for all of her characters she creates a specific color palette, both to help differentiate the actors from each other and because “in life, people tend to stick to certain colors.” 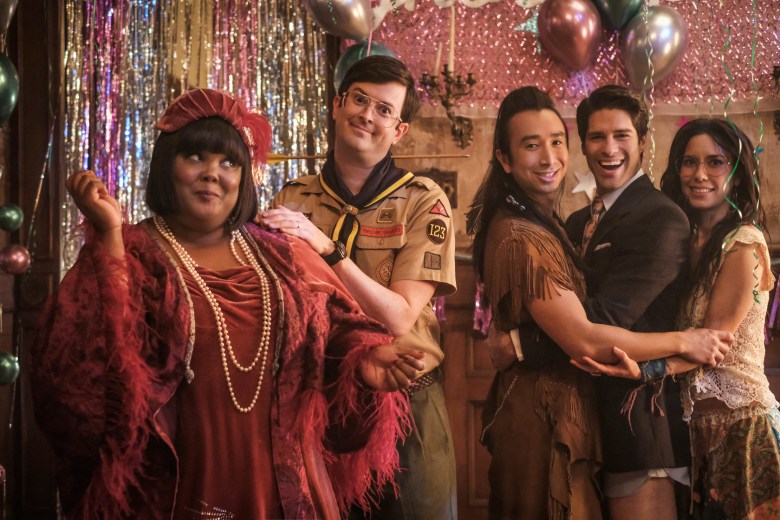 Ultimately, Pain felt that the demands of the “Ghosts” pilot put her in touch with the feelings that made her want to design costumes in the first place. “When you think about the movies you love, whether it’s ‘Badlands’ or ‘Blade Runner’ or ‘Pretty in Pink,’ you look at what someone is wearing and that is their character,” she said. “It’s such an integral part of shaping who they are. This show was closer to one of those feature films in terms of the richness of how it was shot and the opportunities it provided — it wasn’t your run of the mill contemporary clothing, where you’re just out shopping. It was a lot of research and a lot of digging deep, which was different from what I had been doing the past couple of years, and that made me really excited. As a costume designer, you always want to push yourself to do new things.”