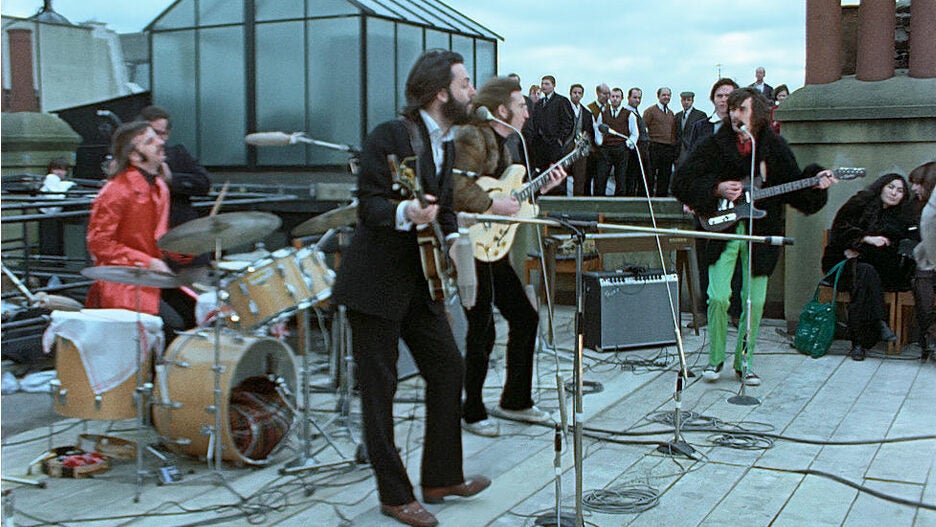 For the last couple of years, filmmaker Peter Jackson had assured Beatles fans who have waited over 50 years for a “Let It Be” reboot that his version was going to be more about the joy and camaraderie, and less about the in-fighting and tensions that were eating away at the Fab Four during the January 1969 recording of the group’s final studio album. But there were conflicts, and that’s what makes Jackson’s seven-hour-plus homage into a historical event worth watching. Classic conflicts that inspire great cinema.

Now The Beatles are characters in their own movie, “The Beatles: Get Back.” There’s the hero (Paul McCartney), the affable confidant whose presence calmed the waters (Ringo Starr), the faltering antihero (John Lennon) and the villain who gains redemption (George Harrison).  Jackson took 60 hours of never-seen 16mm film and 140 hours of audio and miraculously transformed this into a fly-on-the-wall homage to friendship, conflict and artistry.

For those of us who made it through the entire docuseries, the gems will resonate longer than the opening chord of “A Hard Day’s Night,” as when McCartney’s eyes brim with tears as he pondered the future of a Beatles without George Harrison, and the fuel that Lennon’s disdain and distance poured on that fire. McCartney took the reins from deceased manager Brian Epstein and urged everyone back to work. Ringo was the glue that seemed to hold The Beatles together, and it was never more evident than when he sat silently with McCartney in a studio meeting — you could feel the supportive vibe. Harrison was emerging as a world-class songwriter and had drawn a line in the sand when it came to following McCartney’s musical direction — he was willing to sink the ship and not go down with it. And of course, the scene in the studio commissary where original director Michael-Lindsay Hogg planted a hidden mic in a table flowerpot — and we overheard Lennon taking McCartney and himself down a few pegs for their treatment of Harrison. Lennon’s concern for the band was later dashed in a conspiratorial chat with Harrison on bringing in Allen Klein to manage the group’s affairs.

Jackson’s promise of the joy is here. We see how “Get Back” originated as a protest song against former U.K. Health Ministry Secretary Enoch Powell’s “rivers of blood” and toxic legacy of division. Let’s not forget that The Beatles were the first to insist that they not play to segregated audiences. Lennon’s recognition of Martin Luther King Jr. — “he’s fantastic” — gave us a clue to the activist that he was to become. The Beatles grew and their music fertilized the growth of a generation that warmed themselves at the campfire of their artistry.

All of the angst and in-fighting resolved into what is arguably the most iconic live performance in history — the rooftop concert performed not in an ancient Tunisian amphitheater or aboard the QE2 ocean liner, but simply on the roof of their own office building and studio, with London at their feet. They disrupted business and it was a joy to watch city residents looking up as if The Second Coming was about to happen and they were not quite able to see how the world ends.

Through it all, the original director of the historic footage, a young cigar-chomping Michael Lindsay-Hogg, was the man behind the curtain who created this Oz. The original “Let It Be” documentary was his vision, and Jackson’s “Get Back” features him prominently as a character in the drama he helped to orchestrate. Jackson lets Lindsay-Hogg take a prominent position, and you can feel his angst as the days started passing by and he was no closer to his goal – the goal that was being shattered by conflict and ego. Yet, Lindsay-Hogg hung in there, and that’s the real reason why “Get Back” shines. He documented the end of an era. Peter Jackson exhumed it from the ashes and created art, and an inspirational guide to how art can steer us in the direction of culture. The Beatles did that, and “Get Back” shows them in the most human light.