Production of Clare Crawley’s season of The Bachelorette came to a screeching halt on Friday, Mar. 13, 2020, due to coronavirus (COVID-19). All 30 eligible guys were at the Hyatt Regency in Westlake, CA, when the news broke. Sadly, Chris Harrison revealed that the cast might not be the same when the show picks back up in a few weeks or months. 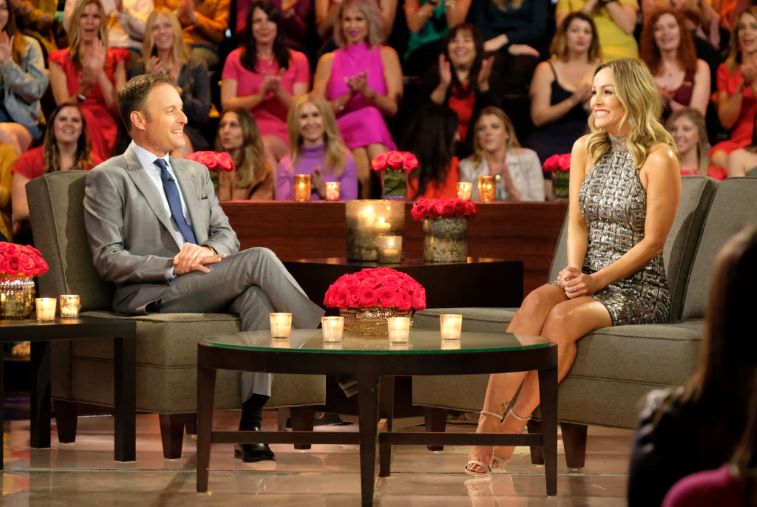 With the coronavirus forcing people around the world to stay home, many celebrities have taken to social media to try to boost morale and continue to engage with their fans. Harrison’s girlfriend, Zima, is an entertainment reporter and producer for ET. She also hosts and produces a webcast focused on The Bachelor called “Roses and Rose”.

#BachelorInParadise DREAM CASTING TIME – let’s mentally escape and think of summer, when hopefully we are largely back to normal (note: we must stay home as much as possible now! #SIP) ?☀️? Chris Harrison reveals who he thinks would be perfect for #BIP from Pilot Pete’s #TheBachelor season; I honestly think it could be the wildest season of Paradise ever. Who do you want to see on the beach, and what couples do you think would work? ?? p.s. new #RosesAndRosé up today! Will keep you posted on timing ?❤️? #TAMMY !!! ? and let Chris and I know if you want another Instagram live tonight, we want to keep things fun and interesting during the #corona times — SIP (shelter in place!) and keep it CHIC! #coronavirus

The couple has gone on Instagram live twice since the pandemic caused social distancing. They are calling their lives, “Fireside chats,” and they answer plenty of fan questions. Zima opened the Mar. 17, 2020 installment by telling fans that she didn’t brush her teeth yet today.

Harrison and Zima were very down-to-earth about what is going on in the world and what they are doing to keep themselves occupied while being quarantined.

The morning after Peter Weber’s season finale of The Bachelor, ABC posted the photos of 32 men on The Bachelorette Facebook page. Fans went wild over their ages. Only nine of the men were over the age of 30. One guy was even 23-years-old. However, when production was canceled on Mar. 13, 2020, ABC took the photos down.

“So many people are talking about Clare and her season,” Zima said in the fireside chat. “Clare went on Instagram live and asked for people to submit their applications today.”

2020 energy ⚡️ Edit: What needs to be said, Is that this “energy” was hard earned for me this past year. And this photo is to remind MYSELF how hard I’ve worked and fought for my peace and happiness. And the truth is that I probably wouldn’t have posted it in the past.) But guess what… 2019 was awful tough. I don’t show it often, but there were so many days where I wanted to just crumble. But my CHOSEN family, and 2 sisters fought right along side me when I was struggling. (Ya I said it) And I am forever forever grateful!! They held me up when the weight of my moms diagnosis crushed my soul. We fight together. So ya, here’s my 2020 energy⚡️, and who cares if I gained weight, earned a few more wrinkles and have a goofy looking chipped front tooth! I worked hard for this happiness. Thank you for coming to my TED talk ?

Crawley has always said she dates younger guys, but her friend, Michelle Money, did an Instagram live video earlier requesting that no guys younger than 29 be cast for the season.

“The thought that everybody is going to come back again is probably very slim,” Harrison said. “There will be some different guys. There may be completely different guys.”

Zima and Harrison went on to say that people take off of work and rearrange their lives to go on the show. It is hard for individuals to go through that effort again several weeks or months later.

“I’m all for it,” Harrison said when he heard Crawley was asking for more applications for her season. “Keep casting new guys! Is Clare going to date a 23 year old guy? No, she’s not!”

It’s interesting to hear that Harrison doesn’t believe Crawley will date a 23-year-old, but one was initially cast on her season. It looks like the postponed production might work out for the best for Crawley.

What a difference a week can make. The world and our lives have changed drastically, that is a fact. But how we handle this moment is still up to us. Be responsible and vigilant and encourage others to do the same. Be kind, loving and courteous. Be good neighbors and good citizens. We need this now more than ever. There will be a time we can get back to our insane political bickering but this is not that time. Be smart, use common sense and educate yourself. We will all get through this together. How we choose to get through this together is up to each one of us. Choose wisely! God bless you all

“We are just like you, Bachelor Nation,” Harrison continued. “Who do we miss? Clare was always that woman that we thought would be a great Bachelorette. The timing never worked out — so this is it. We finally got our wish.”

Clare Crawley is sticking around and ready to find love. However, it looks like an entirely new cast will be coming her way in the next few weeks or months to come.

Read more: ‘The Bachelorette’: Fans Are Rooting for the Older Men on Clare Crawley’s Season — Spoiler Alert — There’s Not Very Many

Tags: Bachelorette, the
You may also like
Celebrities News