Earlier this year, newly-minted author Priyanka Chopra released a memoir, “Unfinished,” in which she discusses her late father, Dr. Ashok Chopra, who died from cancer in 2018. She later memorialized him with a tattoo, which is featured prominently on the book’s cover. Did you know the actor also has several other tattoos as well?

In her book, Chopra recalls the moments of despair following his diagnosis. Revealing on Oprah Winfrey’s talk show “Super Soul,” (via The Indian Express), that “I flew my dad to Singapore, New York, Europe, India, everywhere, just to do whatever I could to prolong his life,” Chopra told Winfrey that her father’s death went as deep as impacting her relationship with faith.

Luckily, Chopra had two mild salves in the form of her career and in 2017, in meeting now-husband Nick Jonas. “I was fortunate to be able to continue working, which was my salvation,” Chopra wrote in “Unfinished,” via GQ India, continuing, “I’m not saying there weren’t a few bright spots, times when I delighted in the world around me. Mercifully, there were, and meeting Nick — however briefly — was one of them.”

Chopra’s tattoo tribute to her father carries immense weight, so get the details on all of her body art below. 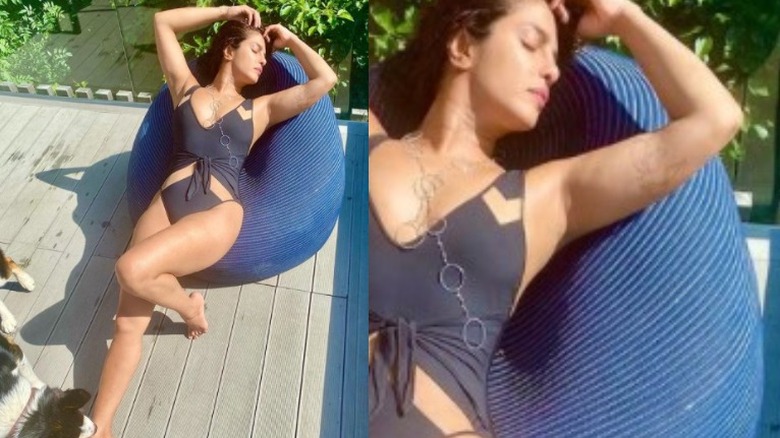 Anyone who has scanned the cover of Priyanka Chopra’s memoir, “Unfinished,” has seen the tattoo prominently featured on the side of the actor’s right wrist. “Daddy’s Lil Girl,” the ink reads in cursive — a memorial of the tight-knit relationship she shared with her late father.

On July 18, she revealed even more ink. Chopra’s 39th birthday festivities included an impromptu sunbathing photoshoot of her and her dog Panda, as seen on her Instagram in a two-slide photo series. In the sun-soaked snapshots, Chopra lounged in a sleek one-piece swimsuit, displaying a fairly new tattoo inside her upper left arm. According to Laughing Colours, fans have guessed the ink is everything from a map of Asia (where Chopra is from, and where she got her start in Bollywood) to a map of Pangaea (the super-continent that existed before the seven continents were separated, per Live Science).

Chopra also bears tattoo tributes to her and husband Nick Jonas’ three dogs, which, other than Panda, comprise of chihuahua Diana and German Shepherd Gino. Per the Daily Mail, Chopra flaunted three inked paw prints on her right ankle in Jonas’ June Instagram Story, each representing a four-legged member of their family. It seems like whatever Chopra’s map tat may signify, the Jonas family and their dogs are set for global domination into our collective hearts.