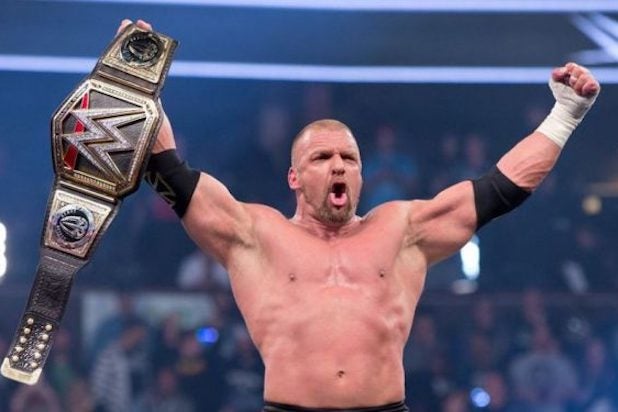 The tradition of Vince McMahon’s pro wrestling company gifting a title belt to champions of other sports dates back eight year and actually started with baseball, Paul “Triple H” Levesque told TheWrap ahead of Sunday’s Super Bowl LV. The seed for the idea, however, was planted well before then.

During his many, many championship reigns through WCW, WWF and WWE, stars from other major sports would regularly stop Levesque and ask him if they could take pictures with the title. Levesque would oblige, and the (other) highly paid, worshipped and decorated jocks would regress into giddy fans. A major professional wrestling (and to some degree, boxing and MMA) title belt has that kind of effect on people — the symbolism of the leather strap isn’t lost on even the most accomplished athletes.

It’s true. Rodgers, who won the 2011 Super Bowl, does not point to his ring finger when feeling himself — he pantomimes strapping on a championship belt. The Super Bowl XLV MVP is sending a message to his current and future opponents, and possibly trying to get WWE’s attention on a make-good.

“David Ortiz — Big Papi — was a huge fan. Still is. Here’s a guy with all this bling, he’s got the earnings and the giant chains and everything. It’s part of who he is,” Levesque said. “When they won the World Series, he was such a big fan and was so into them, we [sent him a] title. He wore it nonstop and just put it over like a million bucks.”

The next time Levesque would see the same major sports stars on the road, it wasn’t so much another photo op they were looking for — they wanted their own WWE Championship Belt. Witnessing how much the title meant to these athletes (and surely seeing the marketing potential), WWE obliged. In 2014, the company sent a championship belt to LeBron James, who immediately purchased the titles for everyone else on his team. More requests began pouring in, and soon, the WWE Championship belts started showing up regularly in victory parades.

“It just took on a life of its own, and we went with it,” Levesque, who is now WWE’s executive vice president of global talent strategy & development, and the owner of eight WWE Championships (among other world titles), said.

Sure did. These days, a WWE Championship Belt is “another thing you expect to get when you become ‘It,’ when you become the champion,” Levesque said. Rocking one over your shoulder after winning the big game is the new “I’m going to Disneyland,” he added.

Antoine Winfield Jr., who posed with the Buccaneers’ custom title belt during Sunday’s postgame press conference would surely agree. (You can see that photo below.)

While the belts may not hold the same value as the diamond-drenched Super Bowl rings, WWE sends what Levesque called “actual WWE Championships” out to the winning team. Years removed from sending a replica to Ortiz, these modern-day belts come with custom side plates, which take a few weeks to manufacture, Levesque told us. WWE orders side plates for both Super Bowl teams so the belt is ready to wear right after the final whistle. That “rush process” can be the most expensive part, he said.

“They are hand-done. It’s a few thousand dollars,” Levesque said.

Here’s a cleaner shot of the custom title:

As if there wasn’t already enough crossover between WWE and the NFL, in his tweet, Triple H refers to the fact that April’s WrestleMania 37 is set to take place in the same stadium — Raymond James Stadium in Tampa, Florida — as Sunday’s Super Bowl.

Rob Gronkowski, who caught two of Tom Brady’s three touchdown passes last night, spent some of his short-lived NFL retirement in WWE. The tight end even captured the 24/7 Championship during his brief tenure.

So yeah, Gronk “will know what to do with it” — if he can ever pry the belt away from his teammates, that is.