The genre trappings are fun, but the film has a lot to say about how we will shape our lives post-pandemic 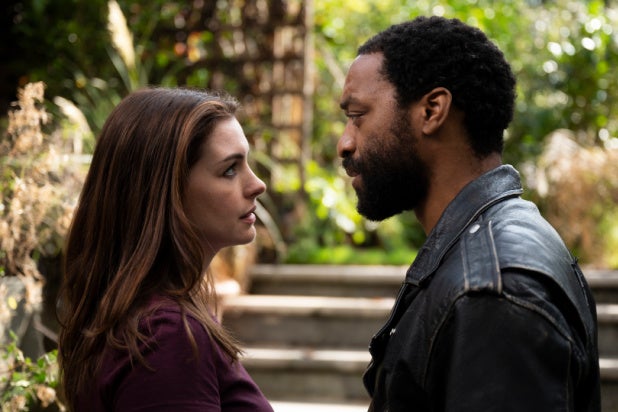 It’s January 21, and with the COVID-19 vaccine still in the preliminary stages of roll-out, it’s far too early to think of the world as being “post-pandemic.” But it’s clear that our lives will be different when this health crisis is over, and “Locked Down” is already contemplating those changes.

That it can balance issues of radical societal change with a heist and a love story and a critique of corporatism is a testament to the skills of writer Steven Knight, director Doug Liman (“Edge of Tomorrow”), and actors Anne Hathaway and Chiwitel Ejiofor. This is the sort of project that calls for performers who can deliver both movie-star dazzle and bitter regret, and both leads are more than up to the task.

It’s early 2020, and London is in lockdown, which is pretty much the only reason that Paxton (Ejiofor) and Linda (Hathaway) are still under the same roof. She fell in love with him on the back of his motorcycle, and there was a time, much earlier, when they would road-trip through exotic locales, but now there is only resentment and tedium between them. She’s stuck moderating Zoom meetings in which she has to fire employees from the international conglomerate that she loathes more with each passing day, while he can’t go to his job as a truck driver — not that he wants to, but it’s the only job he could get because of his criminal record. (Paxton did jail time for getting into a fight to save a fellow biker.)

An utter coincidence happens: Paxton gets rehired to drive goods from London department stores out to storage in the countryside, while Linda is tasked by her superior (Ben Stiller) with taking a diamond that her company has had on display at Harrod’s and shipping it to New York, where its unsavory buyer will keep it locked away in a vault. (Figurative ownership, she is told, means more than literal possession these days.) She is to pass along the real diamond, currently in Harrod’s vault, while disposing of the fake replica that the store has on display.

It’s a heist that can only happen through the randomness of Linda and Paxton being the only people who will handle the diamond, and if the theft were all that “Locked Down” had on its mind, this would be a crime of eye-rolling contrivance. Instead, the theft is a stand-in for the pandemic, a catalyst that will make these two people take stock of themselves and think hard about what they’ll do when their lives are unpaused post-COVID-19.

Those who have lost loved ones to the virus will, of course, be coping with the aftereffects for the rest of their lives, but no one is emerging from this historical moment unscathed. The way we work, the way we live, and the way we focus our energies and abilities will be forever changed, and Paxton and Linda are so vividly written and acted that the crime they plan to commit, set against the consumerist gloss of one of the world’s leading retail outlets, takes a backseat to their contemplations of how they got here and where they’ll go next.

It’s a daring mix of genres, but it works, as though Noah Baumbach had been called in to do a rewrite on “How to Steal a Million.” Steven Knight wrote and directed one of the best (“Locke”) and worst (“Serenity”) films of the last decade, but when he is good, he is very, very good, and his skillful handing of relationships and claustrophobia and corporate-speak is matched by Liman’s ability to bring all of this to fruition.

Ejiofor and Hathaway make a great pairing; they get memorable moments separately, from his regaling their cozy block of townhouses with poetry to her sneaking cigarettes and trying to keep it together during those deadening work calls, but they absolutely click together as a couple who think they’ve reached the end of their rope, only to discover that maybe they haven’t.

COVID cinema has, up until now, fallen into the categories of skillful gimmickry (the Shudder Zoom-horror film “Host,” for example) or outright exploitation (“Songbird”), but “Locked Down” both incorporates and comments upon the realities of the moment. It might not be the first movie to explore life in the pandemic, but it is, for now, the best one.

Tags: down, film, locked, R
You may also like
Celebrities News