No strong links connect Angelina Jolie and The Weeknd, so it is unsurprising that the pair has been attracting public attention after they were spotted together on June 30 in Los Angeles, as Page Six is reporting. The actor and the Canadian singer, whose real name is Abel Tesfaye, aren’t known to be friends, but there are a few connections between them, particularly on The Weeknd’s side.

In 2016, The Weeknd name-dropped Brad Pitt, Jolie’s ex, in his hit song “Starboy,” a song that was released in September — right around the time Jolie and Pitt announced their contentious divorce, as Bustle reported at the time. “Let a n***a brag Pitt / Legend of the fall took the year like a bandit,” The Weeknd sings, a reference to the 1994 film “Legends of the Fall,” which starred Pitt. The same album, “Starboy,” also includes “Party Monster,” that seems to mention Jolie. “Angelina, lips like Angelina,” he croons. As we know, Jolie is known for having what TODAY called “the most famous lips in the world.”

But given that these are some rather flimsy links, The Weeknd and Jolie’s L.A. outing continues to be a puzzle. Was their meeting romantic? Was it business-related? Keep reading to find out what he know so far.

The Weeknd and Angelina Jolie reportedly spent hours together 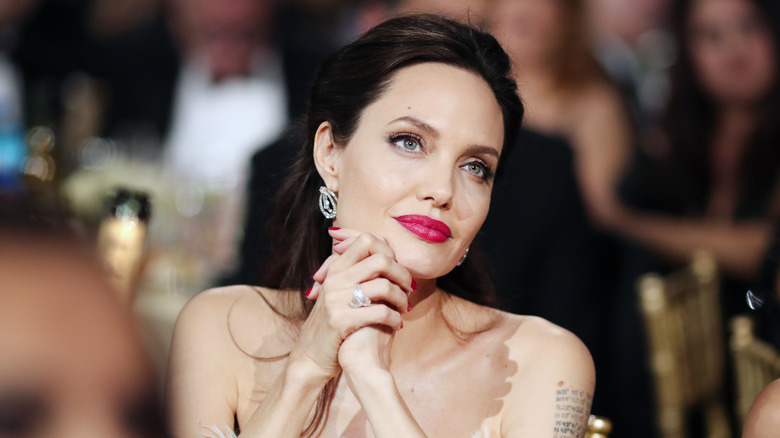 According to Page Six, The Weeknd and Angelina Jolie were seen leaving a popular-among-celebs Italian restaurant in Santa Monica, where they reportedly spent hours dining together. The two left Giorgio Baldi separately so that the paparazzi wouldn’t have the chance to photograph the pair together, the site claimed. However, a source said the two were not trying to keep the fact that they had grabbed dinner together to themselves. “They’re clearly not trying to hide [the dinner date],” the unnamed insider said.

The source, who Page Six contends is close to The Weeknd, didn’t disclose the nature of their get-together, but pointed out that the singer is interested in widening his career options. “He’s definitely focused on getting to the movie business. He has the new HBO series he’s starring in,” the insider told the publication, referring to “The Idol,” which The Weeknd co-created with Reza Fahim and Sam Levinson. The singer is not only set to star in the series but also to co-write it, Variety reported.

In addition, The Weeknd played himself in Adam Sandler’s acclaimed “Uncut Gems” in 2019 and co-wrote (and starred in) an episode of “American Dad!” in 2020, Variety detailed. So while The Weeknd and Jolie, who is also a director and filmmaker, could very well be interested in each romantically, their date could just as easily be the beginning of a new business partnership. Who knows what they could have in store for us?

Tags: da, dinner, Inside, the, Weeknd's
You may also like
Celebrities News