Tom Allen appeared on Good Morning Britain to plug his new book, involvement in the Great British Bake Off’s spin-off, Stand Up To Cancer and taking part in an upcoming episode of Tipping Point. During the conversation with Kate Garraway and Ben Shephard, the comedian left them in fits of laughter when he discussed becoming “a supreme leader”.

“You celebrate your lack of shame,” Kate said referencing his book.

“Well I try to,” Tom replied. “I wanted to write something about growing up in suburbia and being an outsider and I thought what best time to write then lockdown – I’ve always kept a diary.

“I always felt I was a bit of weirdo and thought if I write about it other people may feel like that and then I would feel less alone!

“And so it turns out lots of people feel strange and awkward and odd at times,” he joked. 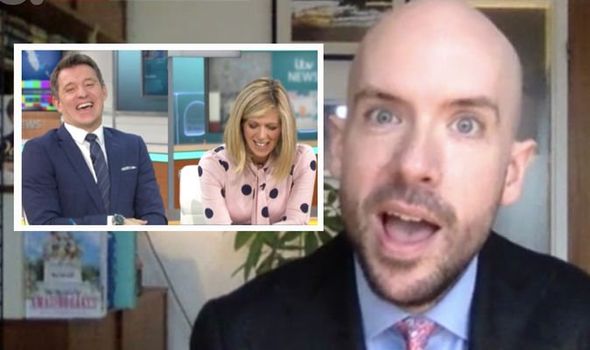 Ben added: “Have you feel able to start the Cult of Tom? Have all these people been flocking to you and are you what they’ve waiting for?”

“That’s right, that is why I like to appear on so many television programmes because I dream of being one day, a supreme leader,” Tom remarked.

“The supreme leader of the awkward!” Kate continued.

As for his involvement in the charity version of GBBO, Kate asked: “Have you got the skills?” 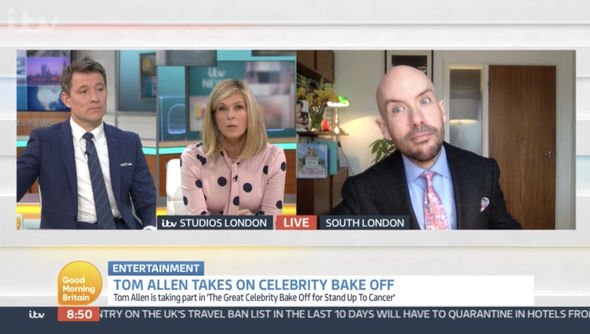 Tom is known for appearing regularly on Extra Slice where he and Jo Brand take a look at how well the Great British Bake Off contestants do throughout the competition.

And Tom always jokes about the outcomes of each bake, but how did he fare when he entered the tent for charity?

“It’s funny you should ask that Kate, actually no,” Tom commented.

“As somebody whose spent basically their whole career for making fun of people for baking, it actually turns out it’s quite difficult that baking malarkey and I should’ve been much nicer about it. 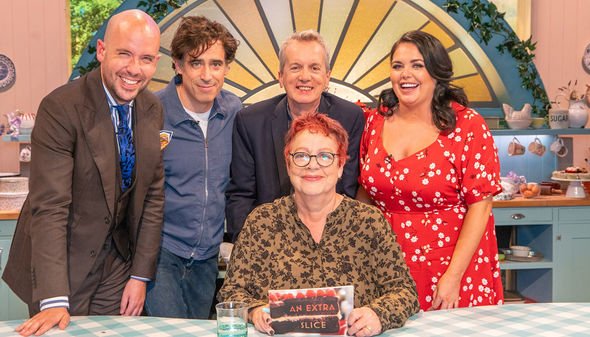 “It was a nice experience to go into the tent and try it. I thought ‘I’ve seen enough people do it, how difficult can it be?’

“It turned out to be very difficult and very stressful, and actually, truly horrifying experience all round,” he added.

Ben asked: “Do you think, come the next series of Bake Off and Extra Slice, you will be less venomous?”

“How dare you suggest I’m venomous in anyway Ben Shephard!” The comedian remarked. “And also, no I don’t think so.”

“We wouldn’t want it any other way!” The presenter added. “As you know we’re huge fans of what you do in our household.

“Tom came on Tipping Point: Lucky Stars last summer – which is not out yet and was a glorious contestant.”

Kate added: “Was he – oh you can’t say whether he was successful – I bet he was dashing and looked amazing.”

“Kate I looked incredible and Ben explained the game to me – which I had no idea how to play until I got there!” Tom said.

Good Morning Britain airs weekday mornings at 6am on ITV.