Coronavirus Fears Hit TV Business, Are Upfronts Next to Go?

The release of Lionsgate’s “I Still Believe” marks the arrival of a new studio in the growing faith-based movie market: Kingdom Story Company, a new venture founded by directors Jon and Andrew Erwin that hopes to win over Christian audiences with a new approach to the genre — and maybe even draw in some general audiences, as well.

“I Still Believe” is also big for Lionsgate because it is the first film released through their distribution deal with Kingdom, which was announced at CinemaCon last year. The deal was made after the surprising success of the Erwins’ previous film, “I Can Only Imagine,” a biopic about the inspiration behind the MercyMe song of the same name that became the best selling Christian music single of all time. Made on a $7 million budget, the film became a surprise success with $86 million grossed worldwide.

With the profits from that film, the Erwins started Kingdom with plans to release 2-3 films per year. “I Still Believe” is the first of three films planned by the studio for 2020 and stars “Riverdale” lead KJ Apa as singer-songwriter Jeremy Camp in the true story of how he met his first wife, Melissa, and married her even as she was diagnosed with terminal ovarian cancer. It’s a film that, like “I Can Only Imagine,” is emblematic of the sort of stories Kingdom wants to tell.

“Andy and I want to create a label that can serve the heartland audience in diverse ways,” Jon Erwin told TheWrap. “We want to make films that are entertaining, that can be seen by the entire family, but most of all are aspirational and inspirational and bring hope. Frank Capra has been our inspiration and I think the world needs a bit more Capra in it.”

While there will be some films aimed specifically at evangelical audiences — one such film will be “Jesus Revolution,” a film about the wave of evangelicalism in the 1970s — films like “I Still Believe” take a broader approach to spirituality. Such universal, uplifting themes are ones the Erwins believe will appeal to moviegoers far beyond just those of a specific faith. On top of that, the Erwins are focused on bringing a higher production value than what is typically expected of the genre, both defying the expectations of those who usually skip such films while giving the devout something they haven’t seen before.

“We were born and raised in Alabama and our offices are in Nashville. We know the audience. We are the audience, and I think there’s misconceptions of what that audience wants,” Erwin said. “We want to bring films that are higher standards of quality that are seen by more and more people and earn a brand that is trusted with the core audience.”

Erwin said that people want some more stories of hope.

“We believe there’s a way to make a faith-based film that’s widely relatable,” he said. “Themes like forgiveness and redemption are universally relatable. If you tell the stories correctly, then there’s no need for faith-based films to exclude anyone.”

One way to expand that audience is to base it in the stories of people well-known outside of evangelical circles. That’s why the Erwins’ next film is a biopic about the life of Kurt Warner, a Hall of Fame quarterback with two NFL MVP awards and a Super Bowl title to his name. Warner has been very open about the importance of faith in his life and career, and the lessons he learned from it are something the Erwins want to bring to the screen with “American Underdog,” which will come out this December with Warner and his wife, Brenda, as producers.

“Our background is documentary films, so going back to that, our first goal is to ask ourselves what is the core story of our subject. And if that subject’s story moves us to our core, we know it’s going to do the same with others,” Andrew Erwin said. “When we find one like with Jeremy or with Kurt, that kind of incredible underdog story, we know it’s something we need to tell.”

Kingdom is also an important element of Lionsgate’s plans too. Under the leadership of Joe Drake and Nathan Kahane, the once-struggling studio is trying to rebuild itself as a company that puts the visions of filmmakers first. It’s a strategy that paid off well with Rian Johnson, whose “Knives Out” has grossed over $300 million worldwide with a sequel now in early plans. The Erwins say that Lionsgate has backed up that statement with action as their distribution deal with Kingdom has become the first ever deal between a faith-based production label and a major Hollywood studio.

“We couldn’t be happier with Lionsgate. They’ve been the most empowering studio I’ve ever worked with,” Jon Erwin said. “They give us so much creative freedom and trust in the stories we want to tell. Joe Drake is running a movie studio now but he’s also been a producer like we are now, so he knows the business from our perspective, he completely understands our vision and works directly with us rather than having layers of management between us.”

Kingdom films won’t be the biggest contributor to Lionsgate’s box office totals. That will still be the job of films like “Knives Out” and the ongoing “John Wick” series. Currently, “I Still Believe” is projected to open to around $15 million this coming weekend, with a chance to overperform and stretch to a $20 million opening while Lionsgate predicts a $10-12 million opening. That’s around the $17.1 million opening that “I Can Only Imagine” earned but well below the $56.8 million start that “John Wick: Chapter 3” earned for Lionsgate last year.

But analysts tell TheWrap that Kingdom could play a role similar to what Blumhouse has been for Universal: a studio that caters to a smaller but reliable demographic with low budget films that offer high return on investment. And if they are successful, the Erwins could stand alongside Rian Johnson as examples Lionsgate can show to potential filmmaker partners of the benefits of making their movies with them.

“Blumhouse has brought a lot of people into the horror movie fold by turning something niche into something with a wider appeal through such a strong understanding of its audience,” said Comscore analyst Paul Dergarabedian. If Kingdom can do that with faith-based films it will elevate both them and Lionsgate, especially as the latter tries to build partnerships with filmmakers and producers who bring new knowledge and different kinds of experience on filmmaking into the fold.” 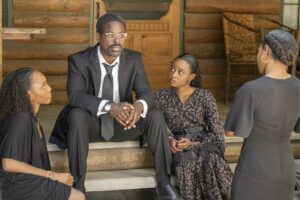 This Is Us' Sterling K. Brown Teases Soggy Series Finale ('You've Gotta Hydrate!'), Recalls That Pearsons' Grief 'Was Already In Us' While Shooting