Sadiq Khan spoke to Piers Morgan and Susanna Reid on Good Morning Britain to discuss if Londoners are safe to use public transport amid the coronavirus outbreak. Following the news that the number of UK cases has risen to 39, Morgan grilled Khan on the safety of people being in close proximity of others while travelling on the tube or busses considering how quickly the virus has spread in other parts of the world.

Khan assured Morgan Londoners should trust the advice of Public Health officials but then stated he is no longer shaking hands.

In the interview, Khan assured Londoners they should be not afraid to use public transport.

He said: “It’s important we don’t spread panic or alarm based on misinformation, what we need to do as politicians is to reply upon the best advice we have from the public health experts and from the chief medical officer. 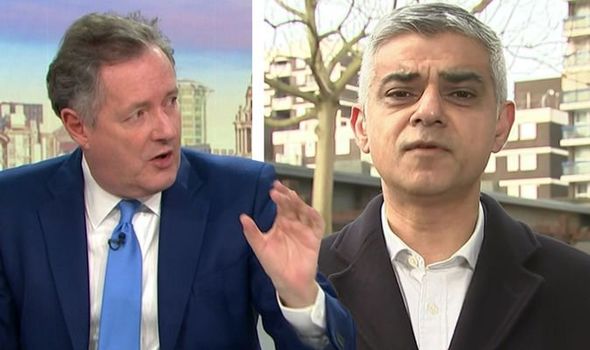 “There is no risk in using the tube or busses or other forms of public transport or going to a concert.”

Interrupting, Morgan asked: “How do you know that? No disrespect but how on earth can you say in a city of 12 million people there is no risk given that we know it’s here and it’s beginning to spread here.

“We know that in other countries the spread has been ferocious in places like Italy, Iran and others. How can you say as Mayor of London there is no risk to people using public transport?”

Khan answered: “Because I rely upon advice I received from Public Health England the chief medical officer and the advice is you’re not going to catch it if you’re washing your hands regularly. 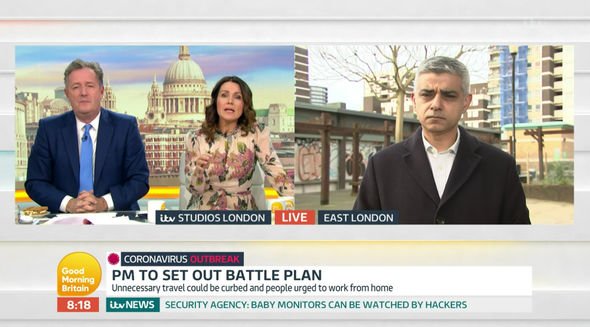 “On the Tube, on a daily basis there are five million journeys and on our buses six million. Many of the concert venues in London have crowds of between 5,000 and 20,000.”

He continued: “The advice we have so far is it’s possible to contain it and delay it spreading by taking sensible precautions, washing your hands many times a day.”

Later in the interview, Morgan asked Khan if he has stopped shaking hands with people and the Mayor admitted he had.

Morgan hit back and blasted him for saying people “should trust officials” while he himself is ignoring the official advice on the safety of shaking hands. 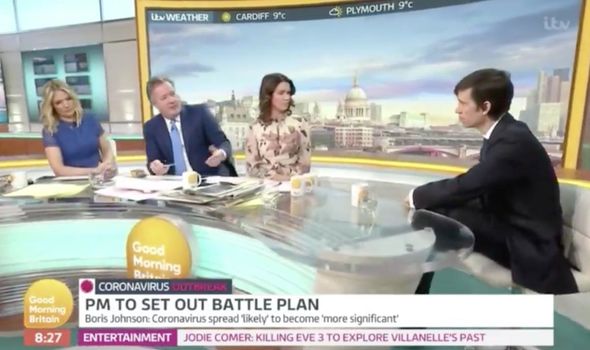 Khan explained shaking hands is a “personal choice” and the advice states there is no risk if you wash your hands regularly.

The Mayor of London added that he is “often out and about” without access to handwashing facilities which is why he’s decided not to shake hands at the moment.

However, Morgan felt Khan was offering contradictory advice and brought up the matter again when he introduced GMB’s next guest, London Mayor candidate Rory Stewart.

“You heard Sadiq Khan there,” Morgan said. “You’re bidding to be London Mayor is he right about this?

“On the one hand it seems to me as rather mixed messages, he himself is not shaking hands because he perceives the risk to be too high for him personally. And yet he says there’s no risk at all for people being crammed on tubes for example.”

Stewart responded: “Obviously there is a risk as he said if you are in close proximity with someone for 15 minutes which you often could be on a tube, there is a risk. The point that the government needs to make is it needs to be very careful in its language.”

Symptoms of the disease are generally flu-like, with the Centers for Disease Control and Prevention (CDC) listing the following symptoms: runny nose, headache, cough, sore throat, fever and a general feeling of being unwell.


Good Morning Britain airs weekdays on ITV at 6am.