Halle Bailey just delighted her Instagram followers by sharing the first official photo of her in character as Ariel, the sea siren who feels like her fins are keeping her from living life to the fullest. The Chloe x Halle singer also revealed that filming has wrapped on Disney’s live-action remake of its 1989 classic “The Little Mermaid.”

In the picture, Bailey was sitting in shallow seawater near a few jagged rocks. Behind her, the ocean stretched out to reach the horizon, which was lit up by a setting sun. Shadows and the fading light made it difficult to see exactly what her mermaid costume looked like, but she did not appear to have on the purple seashell bra that the animated Ariel wears. Her tail was also an earthy color, not bright green. Her hair was styled in long braids that possibly had a slight reddish tint to them.

“The Little Mermaid” was filmed in Sardinia, Italy. In June, PopSugar shared photos from the movie’s set that revealed what Ariel’s wardrobe looked like after she got her legs from the sea witch Ursula. Bailey had on a pink princess dress with a tiered skirt and puffy sleeves. She was strolling on the beach beside actor Jonah Hauer-King, who plays Prince Eric. The rest of the cast includes Melissa McCarthy as Ursula, Javier Bardem as King Triton, Jacob Tremblay as Flounder, Daveed Diggs as Sebastian, and Awkwafina as Scuttle. 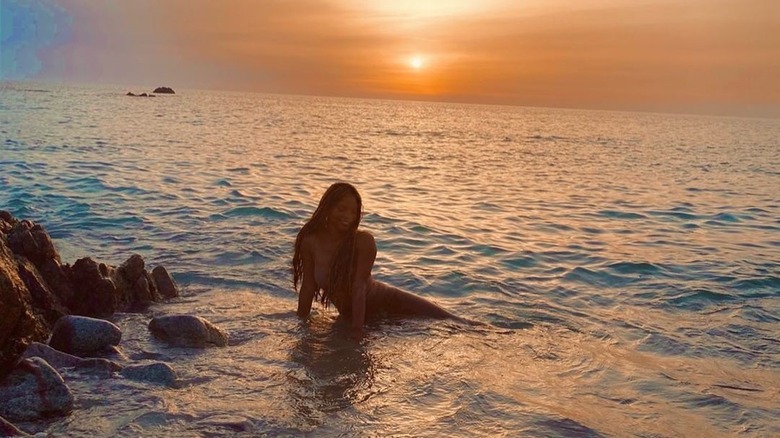 When it was announced that Halle Bailey would be playing Ariel, the news was met with an ugly backlash from racist internet trolls who were upset that a Black actor had been cast as the popular Disney princess. However, she did not let them prevent her from being excited about landing the coveted role. “I don’t pay attention to the negativity; I just feel like this role is something bigger than me,” she told Variety in 2019.

While Bailey could handle the haters, filming in another country took its toll on her. “It has been the toughest experience being away from everything and everyone i’ve ever known,” she wrote. She also revealed that she struggled with feelings of “self-doubt” and “loneliness,” but it was all worth it when the cast finally got their happily ever after. “This experience has made me so much stronger than i ever thought i could be,” she added.

According to Bailey, she and Jonah Hauer-King are now friends “for infinite lifetimes.” They even celebrated their special bond by getting identical starfish earrings. Actor Noma Dumezweni, who plays a mysterious, brand-new character in the movie (per Deadline), raved about Bailey and Hauer-King’s chemistry while speaking to Variety. “There’s a moment when the camera zooms in and you see both of them,” she said. “I was watching on a monitor and was like, ‘If that’s not iconic, I have no taste.'”

Tags: Bailey&#, Halle, Here’s, looks, what
You may also like
Celebrities News