Matt Hancock was grilled by Good Morning Britain host Piers Morgan over the food parcels which were sent out to school children instead of vouchers. The parcels, which include five bottles of water, have been slammed by both the public and the government. The Health Secretary explained he was “glad” the government was able to continue providing free school meals to those who needed them but refused to answer Morgan when he was asked why he voted against this in 2020.

“If you are that glad, can I ask you another question, why did you vote against it?” Morgan asked.

Hancock replied: “Well, I’m glad we were able to put it into place.”

“Yeah but if you’re that glad to put it into place, again, why did you as Health Secretary vote against this?” Morgan demanded to know.

Hancock added: “Because, the reason I’m glad now, is because we’ve been able to sort it out and put it into place.” 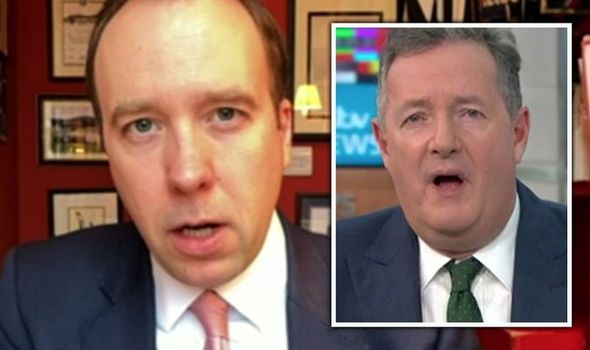 “The reason you’re glad now is because, let’s be honest, you got shamed into it by a football player,” Morgan hit back.

“A young football player with a conscience, who managed to prick the conscience of you and the government. Do you regret now, given how glad you are that it’s now happening, do you regret voting against it?”

Hancock replied: “Well of course I’m pleased that we’re making sure that during this lockdown…”

Interrupting, the controversial host said: “That wasn’t the question. I just asked if you regretted, hang on, it’s a very important question because you wouldn’t have done it without Marcus Rashford campaigning. My question for you, is given how glad you are that it’s now happening, do you regret voting against it? It’s a yes or no [question].”

“Do you regret voting against it?” Morgan repeated.

Hancock replied: “I’ll put it this way, in this first lockdown we took this action and now as you say we’re in a second national lockdown…”

Cutting him off, Morgan said: “Health Secretary you only had to say yes or no. You either regret it or you don’t.”

“Do you regret voting against it?” the GMB host questioned.

“I’m really glad it’s been resolved and we’ve sorted it out. I’m going to use my own feelings and my own words on this one,” Hancock added.

Those watching at home raged over Hancock’s reaction, with one writing on Twitter: “@MattHancock can’t answer a straight question.

“All he had to say was he regretted his vote. Do these people not get we would have a lot more respect for them if they admitted mistakes @GMB @piersmorgan rule breakers might actually listen too maybe…Hmmm… #GMB.”

“I find it utterly disgusting that Matt Hancock laughs on national television when he’s called out by @piersmorgan and @susannareid100 #GMB,” another added.

A third shared: “@GMB @piersmorgan @susannareid10 we pay the wages of these ministers and they can’t answer a simple question #gmb.”

Someone else said: “It’s embarrassing @MattHancock can’t answer the question if he regrets saying no to the free school meals while the kids are at home, just shows how out of touch these MPs are #GMB @GMB #FreeSchoolMeals.”

“Watching @GMB with @MattHancock and he honestly is abysmal. How do you not know what your weekly shop is?! How could you vote against feeding children?! Shying away from answering questions as per the Tory government. #GMB,” a fifth questioned.

Good Morning Britain airs weekdays on ITV at 6am.