Game of Thrones has finished now but some fans are still curious about the family trees between the great houses. Some of the houses from across Westeros are interconnected. The big connection was between the Starks and the Targaryens thanks to Jon Snow (played by Kit Harington) and Daenerys Targaryen (Emilia Clarke). Here’s a look at the family trees and lineage of the houses.

Warning – spoilers for Game of Thrones season 7, episode 7 ahead.

The season seven finale revealed what many fans have long-assumed – that Jon is the son of Rhaegar Targaryen (Wilf Scolding) and Lyanna Stark (Aisling Franciosi).

Bran Stark (Isaac Hempstead Wright) confirmed the R+L=J theory to Samwell Tarly, who then clarified Rhaegar and Lyanna were married in a secret ceremony, making Jon the legitimate heir to the Iron Throne.

As Bran warged back to the Tower of Joy, where Jon was born, fans learned that the King in the North’s real name is Aegon Targaryen.

The reveal had an uncomfortable edge, as it came at the same time as an oblivious Jon went to bed with Daenerys – his paternal aunt.

Neither Jon or Daenerys knows that they are related, but it seems certain that Bran will inform them when they arrive in Winterfell.

But how exactly are the two houses related? Here is a look at the family trees for House Stark, House Targaryen and more. 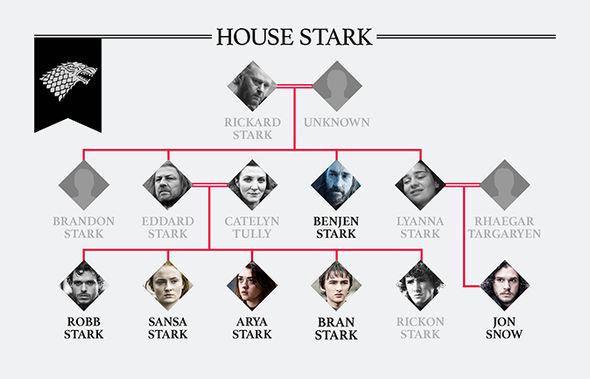 Ned also claimed Jon Snow as his illegitimate child, but as we now know, Jon is in fact the son of Lyanna Stark and Rhaegar Targaryen.

Season seven saw Jon proclaimed King in the North with Sansa at his side but he eventually bent the knee to Daenerys for her help.

The epic Battle of Winterfell saw the Night King (Vladimir Furdik) finally defeated and the Other stopped once and for all. 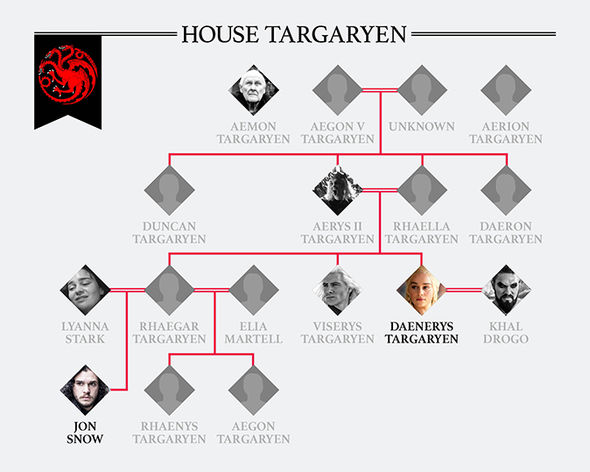 The former ruling family of Westeros – until the Mad King Aerys II (David Rintoul) was killed by his own kingsguard Jaime Lannister (Nikolaj Coster-Waldau).

Daenerys is thought to be the only surviving member of the Targaryen clan and has returned to Westeros take her rightful place on the Iron Throne.

She could face competition from her nephew Jon Snow – assuming he finds out about his true parentage.

HOW TO WATCH GAME OF THRONES ONLINE FOR FREE 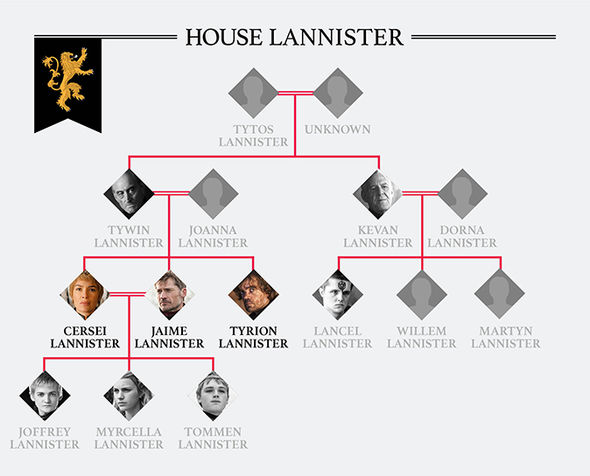 The Lannisters are surrounded by enemies on all sides, and after the deaths of King Joffrey (Jack Gleeson), King Tommen (Dean Charles-Chapman) and Princess Myrcella (Nell Tiger-Free), are left without an heir.

Cersei and her brother-lover Jaime have been holed up in King’s Landing, while their outcast brother Tyrion (Peter Dinklage) has teamed up with Daenerys to take them down. 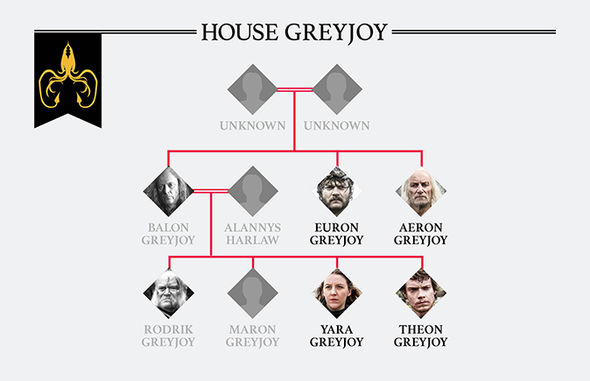 Theon (Alfie Allen) vowed to rescue his sister, who otherwise faced certain death at the hands of her uncle. 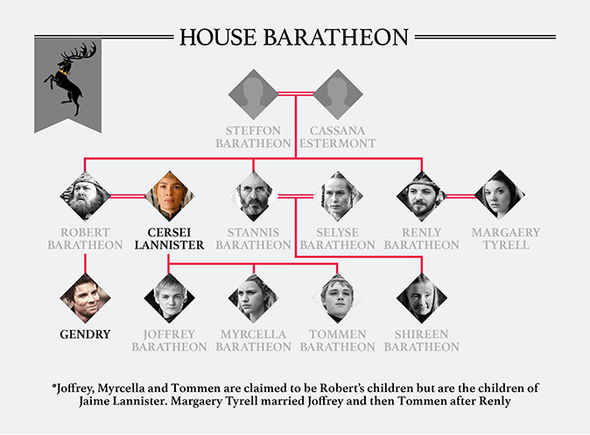 King Robert Baratheon (Mark Addy) had three children with his wife Cersei, but all three were actually fathered by her brother Jaime.

He had many illegitimate children, but all bar one were killed on King Joffrey’s orders.

Gendry (Joe Dempsie) is the only remaining Baratheon heir, but is thought to be dead by the Lannisters. 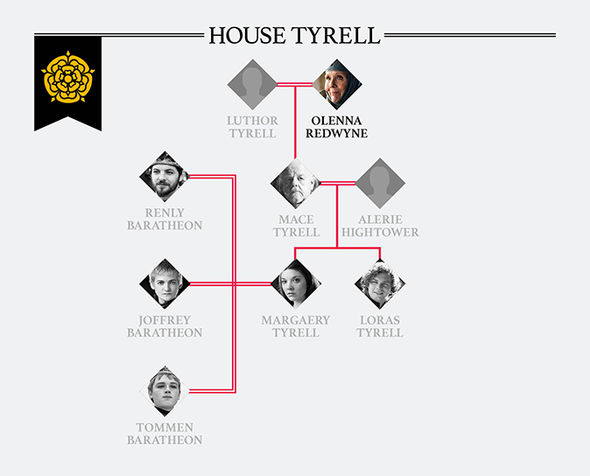 House Tyrell became extinct when Jaime Lannister killed Olenna Redwyne (Diana Rigg) – but not before she admitted to poisoning his son, Joffrey.

Margaery (Natalie Dormer), Loras (Finn Jones) and Mace Tyrell were all killed when Queen Cersei blew up the Sept of Baelor. 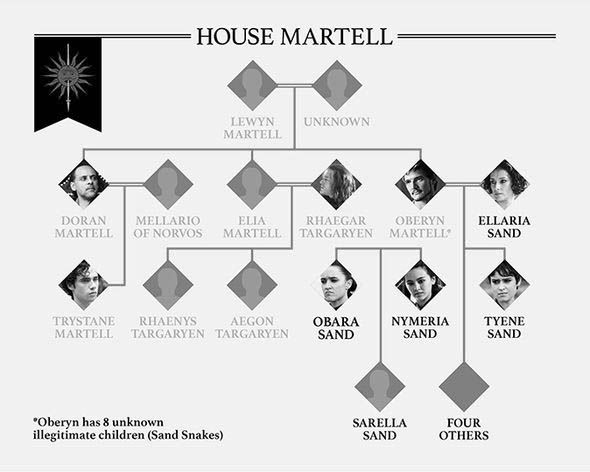 Oberyn Martell’s (Pedro Pascal) death at the hands of The Mountain was one of the most gruesome scenes in Game of Thrones’ history.

It left his wife Ellaria (Indira Varma) and his daughters, the Sand Snakes, as the only remaining members of the family.

Obara and Nymeria were murdered by Euron Greyjoy, who also captured Ellaria and Tyene and took them to King’s Landing.

There, Cersei poisoned Tyene and left Ellaria locked in a dungeon to witness her daughter die, before presumably being finished off by The Mountain. 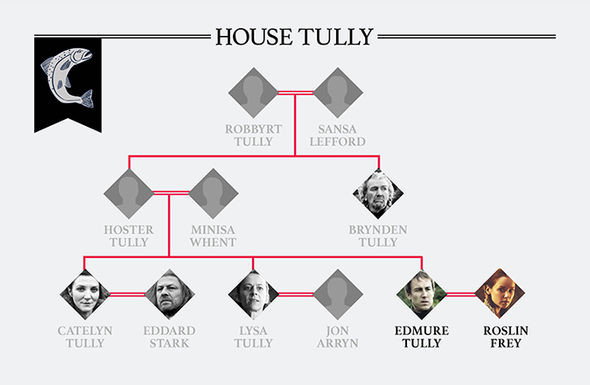 The Tullys are another family that are close to extinction.

Edmure (Tobias Menzies) and his wife Roslin (née Frey) are the only heirs of the late Lord Hoster, however Edmure has been held prisoner at The Twins since the Red Wedding.

Unfortunately for him, his niece Arya seemed unaware of his plight when she travelled to The Twins to kill Walder and the Freys. 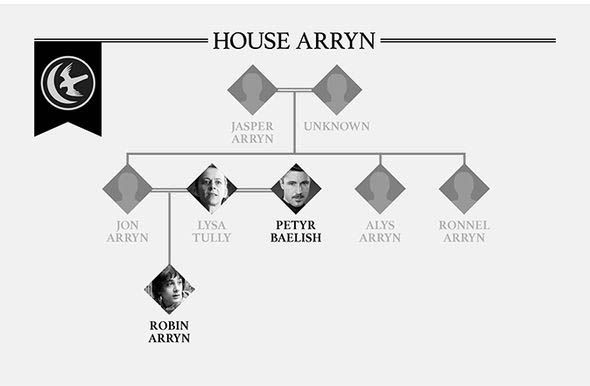 This gave him influence over Lysa’s son Robin, the Lord of the Vale of Arryn.

In season six, Robin sent his army, The Knights of the Vale, to defend his cousin Sansa Stark from House Bolton in the Battle of the Bastards.

Petyr then attempted to turn Sansa on her sister Arya, but his manipulation backfired and he was executed.

Game of Thrones is streaming on NOW TV