Fox this morning announced the bulk of its programming slate for the 2022-23 but not a fall schedule. As Deadline reported two weeks ago, the network had been planning not to unveil a grid in conjunction with its May 16 upfront presentation.

As broadcast networks have become a small part of media congloms’ portfolio pitch to advertisers, the fall schedules are no longer a centerpiece of their presentations and are sometimes omitted from the corporate upfronts altogether. But the broadcast networks still traditionally unveil their fall schedule the morning of their upfront presentation.

Fox will announce its fall 2022-23 lineup to advertisers and the media soon. The decision was made long before the network could not close renewal deals for its top scripted series 9-1-1 and fellow drama stalwart The Resident in time for its upfront, which would’ve created gaping holes on the fall grid. Both renewals are expected to close this week, in time for the shows to be featured on Fox’s fall schedule when it is revealed, likely later this month.

Fox will have a unified linear and streaming presentation, in which the network’s new and returning series will be highlighted alongside content — largely movies — for AVOD platform Tubi. ABC, CBS, NBC and the CW all plan to unveil fall schedules even as a growing portion of TV viewing is being done on-demand, further diminishing the networks schedules’ relevance.

“We are doing a different kind of upfront this year, we have said that we are focusing on a portfolio sale,” Fox Entertainment CEO Charlie Collier said during Fox’s upfront call Monday morning. “We are taking a new portfolio approach based on the way people are buying across it, it’s a complementary situation between linear and digital.” 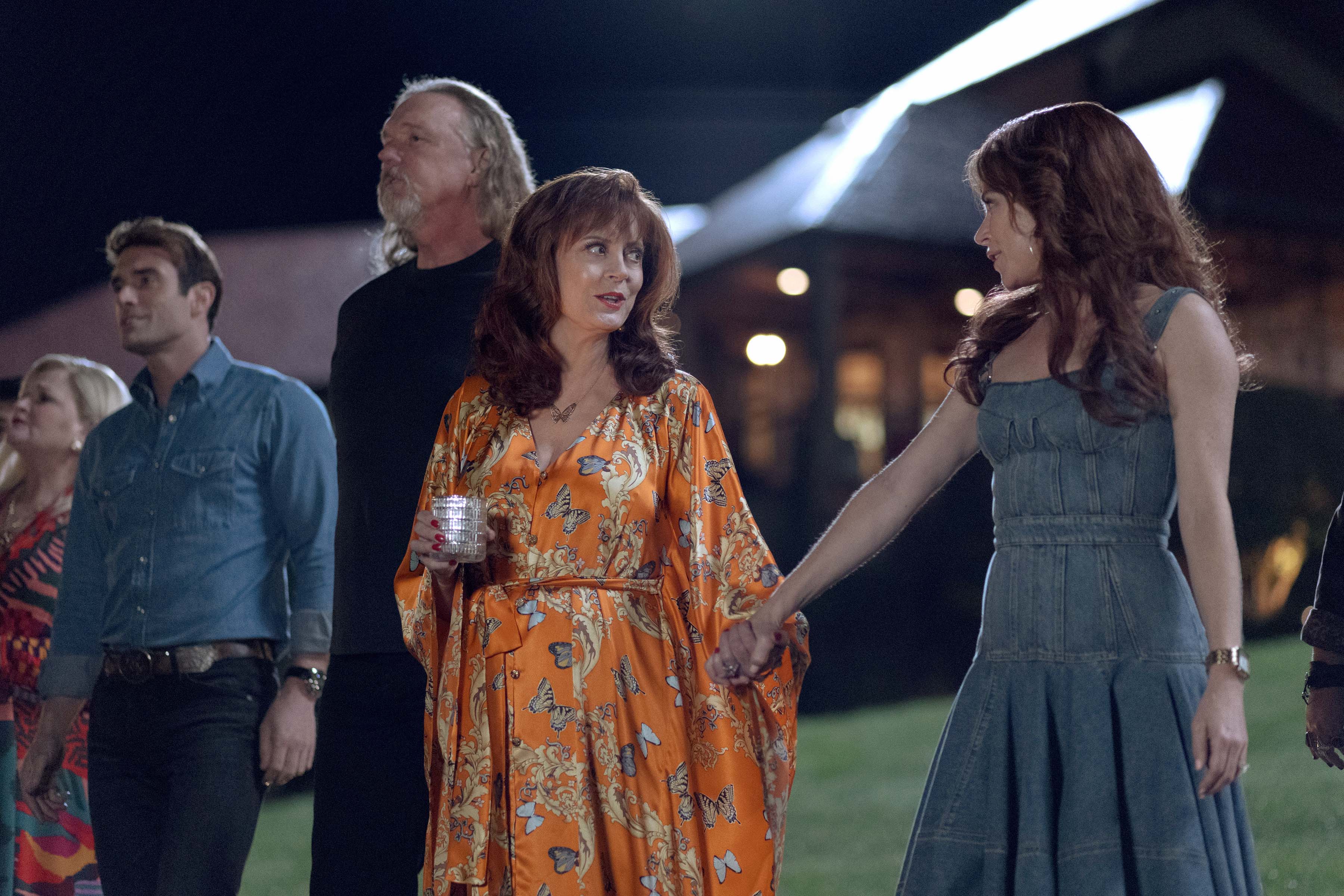 MONARCH is a Texas-sized, multi-generational musical drama about America’s first family of country music. In MONARCH, the Romans are headed by the insanely talented, but tough as nails Queen of Country Music DOTTIE CANTRELL ROMAN (Academy Award winner Susan Sarandon, “Feud,” “Thelma & Louise”) and her beloved husband, “Texas Truthteller” ALBIE ROMAN (multi-Platinum country music star and three-time Academy of Country Music (ACM) Award winner Trace Adkins, “Old Henry”). Dottie and Albie have created a country music dynasty. But even though the Roman name is synonymous with authenticity, the very foundation of their success is a lie. And when their reign as country royalty is put in jeopardy, heir to the crown NICOLETTE “NICKY” ROMAN (Golden Globe nominee Anna Friel, “Pushing Daisies”) will stop at nothing to protect her family’s legacy, while ensuring her own quest for stardom. MONARCH is owned and produced by FOX Entertainment. Screenwriter Melissa London Hilfers serves as creator, writer and executive producer. Jon Feldman (“Designated Survivor”) serves as showrunner and executive producer. Gail Berman and Hend Baghdady (The Jackal Group), Jason Owen (Sandbox Entertainment) and Michael Rauch (“Royal Pains”) are executive producers.

Based on the BBC’s BAFTA-winning British crime anthology, comes a provocative series that takes you on the journey of the defendant. Each episode opens in a courtroom on the accused, with viewers knowing nothing about their crime or how they ended up on trial. Told from the defendant’s point of view through flashbacks, ACCUSED holds a mirror up to the current times with evocative and emotional stories. In ACCUSED, viewers discover how an ordinary person gets caught up in an extraordinary situation, ultimately revealing how one wrong turn leads to another, until it’s too late to turn back. Emmy and Golden Globe winner Michael Chiklis (“The Shield”) guest-stars in the premiere episode, as Dr. Scott Corbett, a successful brain surgeon with a seemingly perfect family. He faces the limits of unconditional love when he discovers his teenage son may be planning a violent attack at school. Later in the season, Marlee Matlin, Billie Porter and Michael Chiklis each direct episodes of the anthology crime drama. ACCUSED is co-produced by Sony Pictures Television and FOX Entertainment. The series is executive-produced by Howard Gordon (“24,” “Homeland”), Alex Gansa (“24,” “Homeland”) and David Shore (“The Good Doctor,” “House”). Emmy Award winner Michael Cuesta (“Homeland”) will direct the program’s premiere episode, reuniting with “Homeland” executive producers Gordon and Gansa.

ALERT is a character-driven police procedural about the LAMPU — the Los Angeles Police Department’s missing person’s unit. When police officer Nikki Parker’s son goes missing, she joins the LAPD’s Missing Person’s Unit to help other people find their loved ones, even as she searches for her own. Six years later, her world is turned upside-down when her ex-husband, Devon Zoellner, shows up with a proof-of-life photo of their missing boy. Or is it? ALERT is a procedural drama with a heart-pounding, life-or-death search for a missing person in each episode, that runs alongside Nikki and Devon’s quest to find out the truth about the person claiming to be their long-lost son. It’s a case-of-the-week show with a case-of-a-lifetime story running through it — a story that alternately brings our two main characters gut-wrenching heartache and heart-pounding joy. ALERT is co-produced by Sony Pictures Television and FOX Entertainment. John Eisendrath (“The Blacklist”) serves as showrunner and executive producer. Jamie Foxx and Datari Turner are executive producers.

All-new animated comedy GRIMSBURG stars Emmy Award winner Jon Hamm (“Mad Men,” “Top Gun: Maverick”), who also serves as an executive producer on the series. In GRIMSBURG, Marvin Flute (Hamm) may be the greatest detective ever to catch a cannibal clown or correctly identify a mid-century modern armoire. But there’s one mystery he still can’t crack — his family. Now that he’s back in Grimsburg, a town where everyone has a secret or three, Flute will follow every lead he’s got to redeem himself with the ex-wife he never stopped loving, even if it means hanging out with the son he never bothered to get to know. GRIMSBURG is owned by FOX Entertainment, and produced by Bento Box Entertainment. Catlan McClelland and Matthew Schlissel created the series and serve as co-executive producers. Gail Berman, Hend Baghdady, Connie Tavel, Chadd Gindin and Jon Hamm serve as executive producers.

From Emmy Award-winning creator Dan Harmon (“Rick and Morty,” “Community”) comes KRAPOPOLIS, an animated series like no other. Set in mythical Ancient Greece, the series centers on a flawed family of humans, gods and monsters that tries to run one of the world’s first cities without killing each other. The series’ voice cast features Emmy Award winner Hannah Waddingham (“Ted Lasso”), Richard Ayoade (“The IT Crowd”), Matt Berry (“What We Do in The Shadows”), Pam Murphy (“Mapleworth Murders”) and Duncan Trussell (“The Midnight Gospel”). In the series, Ayoade voices “Tyrannis”, the mortal son of a goddess. He’s the benevolent King of Krapopolis trying to make do in a city that lives up to its name. Waddingham plays “Deliria,” Tyrannis’ mother, goddess of self-destruction and questionable choices. Within her extended Olympian family – forged in patricide and infidelity – she’s known as the trashy one. Berry is “Shlub,” Tyrannis’ father, a mantitaur (half centaur [horse + human], half manticore [lion + human + scorpion]). He is oversexed and underemployed, claims to be an artist and has literally never paid for anything, in any sense of that word, for his entire life. Murphy voices “Stupendous,” Tyrannis’ half-sister, daughter of Deliria and a cyclops. Trussell plays “Hippocampus,” Tyrannis’ half-brother, offspring of Shlub and a mermaid, and, obviously, a hot mess, biologically speaking. KRAPOPOLIS is owned by FOX Entertainment, and produced by FOX’s Emmy Award-winning animation studio, Bento Box Entertainment. The series is an outgrowth of the direct animation deal Harmon and FOX Entertainment unveiled in 2020.

Award-winning chef, restaurateur and presenter Gordon Ramsay puts his knives aside as he hunts for the most exciting and innovative new food & drink entrepreneurs in his brand-new competition series, GORDON RAMSAY’S FOOD STARS. This time, he’s prepared to put his money where his mouth is, by backing the winner with an investment to take their idea to the next level. But to win Ramsay’s support, it will take more than just a great idea. As he pushes contestants to their limits through a series of relentless challenges, they’ll have to prove they possess the raw ingredients required to succeed – drive, dedication, creativity, passion and talent. Being the last entrepreneur standing will earn the winner a life-changing reward. They just need to survive Gordon Ramsay — the only angel investor. GORDON RAMSAY’S FOOD STARS is produced by Studio Ramsay Global and FOX Alternative Entertainment (FAE). Ramsay serves as executive producer, Lisa Edwards serves as executive producer and Danny Schrader serves as executive producer and showrunner.

Additionally, LEGO MASTERS will air the all-new multiple-night event CELEBRITY LEGO MASTERS: HOLIDAY BRICKTACULAR. Over the course of four crazy nights, LEGO MASTERS will shake it up like a snow globe, with unpredictable twists and surprises. Celebrities will join, as will fan-favorite builders from past seasons, all working together, to create jaw-dropping holiday-themed challenges that will make the contestants’ faces redder than Rudolph’s nose. Make sure you’re on host Will Arnett’s “Nice List,” because LEGO MASTERS is making plans for the ho-ho-holidays.